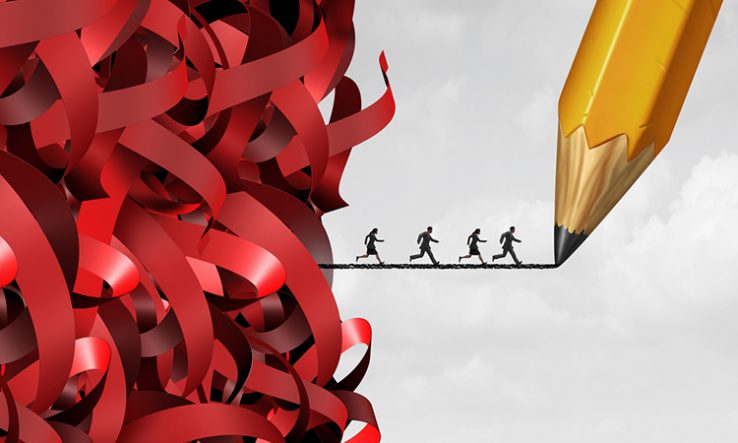 The Office for Students has set out plans to cut red tape for universities, with less regulatory burden for providers that “do not pose specific increased risk”.

In a letter to universities, dated 30 July, director of competition and registration Susan Lapworth says that, following the experience of the coronavirus pandemic, the OfS does “not intend to reinstate our regulatory requirements exactly as before. Instead, we will target our work to ensure that it is increasingly risk-based with our regulation focused where it is most needed”.

Lapworth says the OfS will draw on its experience over the last two years as a regulator to ensure “providers that do not pose specific increased risk should have less regulatory burden”, taking into consideration a government desire to reduce bureaucracy for universities.

Many will interpret Lapworth’s words as an indication that the OfS intends to pivot back to the shepherding role for higher education previously provided by the Higher Education Funding Council for England.

In her letter, she says the OfS intends to “embed the model of engagement with providers that we have operated during the pandemic to help them navigate our regulatory requirements on an ongoing basis”. The regulator also plans to reduce its use of enhanced monitoring of institutions to “reflect a more established regulatory environment”.

However, the letter to accountable officers also says the OfS will shortly “issue regulatory guidance on the public interest governance principles relating to academic freedom and free speech”.

In a change to reporting rules, universities will be given more time to submit financial data given the pressures imposed by the spread of Covid-19. However, the regulator plans to introduce a new requirement to report any potential breach of banking covenants by an institution.

The OfS will also introduce an extra interim data collection later this year in October, to allow the regulator an early look at a university’s expected position at the end of the financial year and its forecasts for 2021—including any new agreed or forecast borrowing. Lapworth says the regulator recognises that such data will not be as accurate as it would be as part of an annual financial return.

The letter also provides details on the revised timetable for reporting requirements and consultations following the hiatus on some regulatory activity during the coronavirus lockdown.