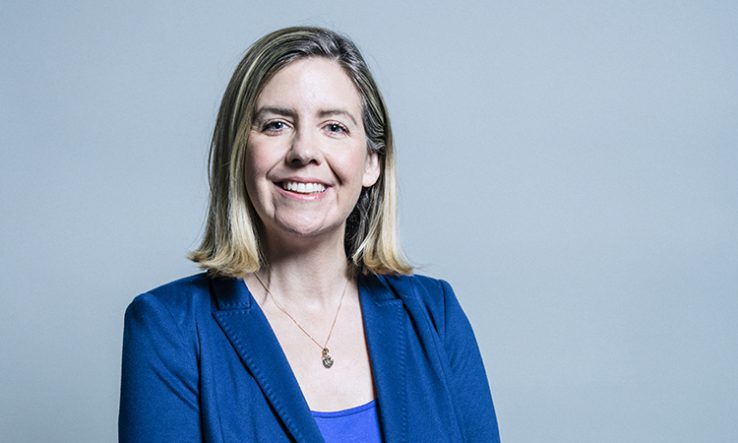 Andrea Jenkyns, a Conservative Party candidate in the general election and MP in the last parliament, is being paid £25,000 a year by the University of Bolton to head up “the National Centre for Higher Education Policy”, but there is no mention of her appointment to the centre—due to launch next year—on the institution’s website.

According to the parliamentary register of members’ financial interests, which details income received by MPs in addition to their main salary, Jenkyns has been paid since July 2019 in return for eight hours of work each week as director of the centre. In total, the politician will receive £25,000 from the north west university per annum.

Jenkyns is the 2019 Conservative Party candidate for Morley and Outwood in West Yorkshire, where she has been MP since unseating former Labour shadow chancellor, Ed Balls, in 2015.

She told Research Professional News that there was no information about the NCHEP online because “we are not launching it until the new year”. “We are currently laying down the basics, defining the objectives and strategies and recruiting members of the team,” Jenkyns said.

She added that, contrary to the name given on the register of interests, her “think tank” is to be called RISE, or the Research Institute of Social Mobility and Education. She added that the name had not changed, and that RISE would operate “within” the National Centre for Higher Education Policy.

“Social mobility is a big passion of mine, having been the first in my family to go to university and having started at Greggs bakery at 16 and working my way up into management in the retail sector.”

Jenkyns added that she was a former chair of the all-party parliamentary group for education, and had been “involved in the Social Mobility APPG and…I want to ensure that every child, regardless of background, has the opportunity to thrive in their chosen career path”.

While there is no mention at all online of a National Centre for Higher Education Policy, there is a Facebook pagefor the Research Institute of Social Mobility and Education, set up in August 2019.

There is also a recent job advert recruiting a research associate to the similarly named Research Institute for Social Mobility and Education on a site recruiting people who want to work for an MP. The adverts states the employer is the University of Bolton, but the job is to be based in London. Application should be sent to “A Jenkyns”, it says.

Research Professional News contacted the University of Bolton to ask for more information on the National Centre for Higher Education Policy, including an overview of its activity. We also asked why there was no mention of Jenkyns’ appointment, or the centre itself, on the university’s website. A spokesman told us that this was because the centre had not yet launched, and details would be released in due course.

Nick Hillman, director of the Higher Education Policy Institute and a former Conservative parliamentary candidate, described the arrangement between Jenkyns and Bolton as “a rum do”.

“£25,000 is close to the national average wage and equivalent to the fees of around three students,” he said. “Yet it remains unclear what work is being done in return.

“If the new centre makes a genuine contribution to public policy on education and social mobility and if it benefits from having an MP so heavily involved, that would be very welcome. But the voters of Morley and Outwood have a right to know how much time each of their potential MPs will have to spend on constituency business and how much on outside activities. So it is vitally important that any outstanding questions are properly answered.”

Jenkyns said the University of Bolton had done “some fantastic work” in the area of social mobility and was “a very inclusive university”.

“We have recruited some well-known and respected leaders in the education sector,” she added.

After picking up on Research Professional News’s investigation, the Guardian newspaper uncovered a donation of £2,000 made in February this year by University of Bolton vice-chancellor George Holmes. Holmes told the paper it was a private donation and did not come from the university.

Angela Rayner, the shadow education secretary, said Jenkyns had "serious questions to answer over her relationship with Bolton University".

“If she actually cared about the prospects of children in Morley and Outwood she would have voted against the Conservatives’ cuts to schools and youth services instead of supporting them time after time,” she told the Guardian.

This article was updated on 5 December