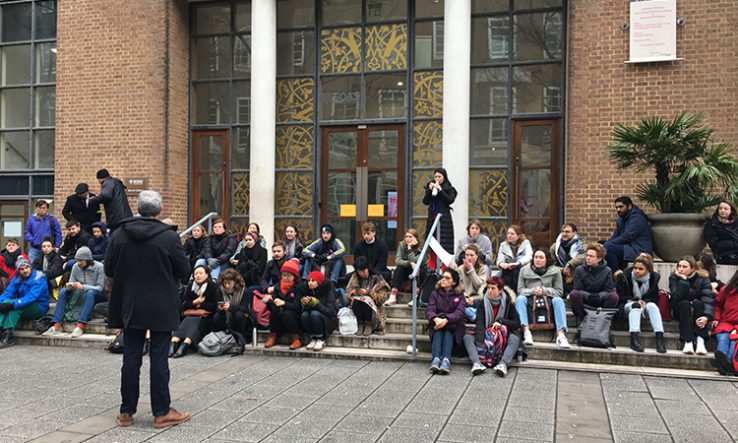 Soas, University of London, could be forced to consider a merger if it cannot turn its finances around, according to the college’s director of transformation and change.

Speaking to Research Professional News on 16 June, Graham Upton said a merger with another college could be considered if plans for a major overhaul to limit financial damage from the Covid-19 pandemic are unsuccessful.

Upton will be acting director of Soas after the current institutional head Valerie Amos departs in September to take up a new role at the University of Oxford, and before her successor Adam Habib takes office in January 2021.

“Merger is an option, obviously,” he said, although he stressed that a merger was “not our priority at the moment”. “If things went badly wrong, yes, come the autumn, it would obviously be an option we would look at in terms of ensuring longer-term survival, but it’s not an option we are urgently pursuing at the moment.”

On 15 June, Soas launched a major consultation with students and staff on its future, which could see courses dropped and hours cut for staff in a bid to shore up the college’s finances. Upton warned Soas would need to take some “pretty urgent and tough decisions in order to get through the financial implications of Covid”.

Soas’s 2019 accounts revealed a total deficit of £19.1 million, cut to an operating deficit of £4m when restructuring costs and outgoings associated with the Universities Superannuation Scheme are taken into account.

On top of its existing deficit, Soas warned it could face losses of up to £16.9m next year—around 20 per cent of its revenue—through an estimated 50 per cent drop in international students, a 15 per cent cut in home and EU-domiciled students, and a 10 per cent deferral rate.

“We are heavily reliant on student numbers and recruitment, and particularly of international students,” Upton said. “We’ve got to do something to make sure we can accommodate that loss, and that means fairly robust and radical decisions being made to bring our budget in line with that.”

Through its restructuring plan, the college hopes to save £17m in 2020-21. Students and staff have been given 30 days to respond to the consultation before restructuring starts in earnest from the end of July.

Upton confirmed that although Soas “will do all we can to avoid redundancies”, staff are being offered a cut in their hours, and a voluntary severance scheme is under consideration.

Soas will also be “reducing the number of modules and courses” from the 300-plus undergraduate options it currently offers. Academic leaders have been asked to review their portfolios and use this as “an opportunity to refresh” their courses and make sure they are “optimally attractive” to UK and international students.

He added that while Soas was already working on a recovery programme before the pandemic hit, Covid-19 “has just put us into a totally different game” and the college is in “a difficult position”. “There are some [universities] that have got very large reserves and assets and will be able to weather the storm, but we’re not one of those and it is difficult,” he said.

Upton hoped the government “will see a level of sense” and do more to protect universities during the coronavirus pandemic. “We’ve just got to hope at some point the government will recognise the importance of the sector in terms of the recovery of the country,” he said.

Despite the challenges ahead, Upton stressed he “wouldn’t be doing this job if I wasn’t confident” Soas would pull through, even though “it’s not going to be easy” and there will be “levels of difficulty and pain in that process”.

“What we are doing now will enable us to recover and rebuild,” he said, explaining that online learning “could be a really important avenue for Soas”. “We’ve got to get to that place where we can start planning positively for the future,” he said.