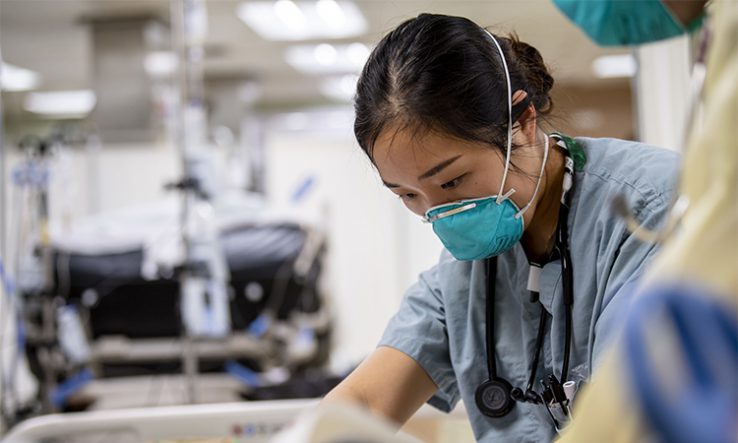 A student nurse has said she is waiting for an apology from care minister Helen Whately following the minister’s assertion that nursing students were “not deemed to be providing a service”.

Jessica Collins, a third-year paediatric nursing student at De Montfort University, told Research Professional News that she was “definitely still seeking an apology” from Whately to all student nurses, explaining that “all the government seems to be releasing is the same statement over and over saying that we are appreciated…but that’s not really enough”.

Collins was speaking after Whately said that student nurses were “supernumerary” while training and were therefore “not deemed to be providing a service”, even though thousands of students signed up to work for the NHS during the Covid-19 pandemic. By defining student nurses as supernumerary, Whately indicated that current nursing students, including those who volunteered to work in the NHS during the pandemic, would be excluded from a bursary scheme to be introduced in September.

Whately made the comments in a letter to Tom Pursglove, Conservative MP for Corby, after Collins contacted him. Collins had received more than 200,000 signatures on her petition asking the government “to reassess our level of student debt”. The 2017-20 cohort of student nurses was the first to pay tuition fees, and upcoming maintenance grants will not be backdated to include them.

Third-year students were asked to work on the NHS front lines during the coronavirus pandemic, and Collins said many students had signed six-month contracts that have since been shortened to end on 31 July. Collins said she had looked through her own contract and found “nothing in there that says there is any possibility that it could change”.

In a statement on 17 June, Higher Education England chief nurse Mark Radford said it was “absolutely untrue” that student nurses were being made redundant. Student nurses in their final year of study in England will be paid until 31 July, and if students still need to work hours that count towards their courses they will also be paid after that deadline.

Collins added that although her university had “tried to be as supportive as they possibly can”, nursing students had missed out on theory lectures and so forcing them to pay tuition fees for the time spent working on Covid-19 wards was unjust.

“There is something here that is just so, so unfair,” she said. “We have been so wronged.”

Research Professional News is campaigning for nursing students to have their final-year tuition fee debt cancelled in recognition of their work in the NHS during the coronavirus pandemic.

A spokesperson for the Department of Health and Social Care said student nurses provide extra support while they are learning and they “have played a heroic role throughout this crisis”.

The spokesperson added: “In recognition of this, we have paid student nurses who opted in to paid placements to respond to the Covid-19 emergency to recognise the extraordinary circumstances that dealing with a global pandemic brings.

“In normal circumstances, while student nurses are on placement, we ensure that they have the space to learn and develop under close supervision. This is what is technically called ‘supernumerary’–meaning that they cannot be included on staff rotas and are not normally paid”.