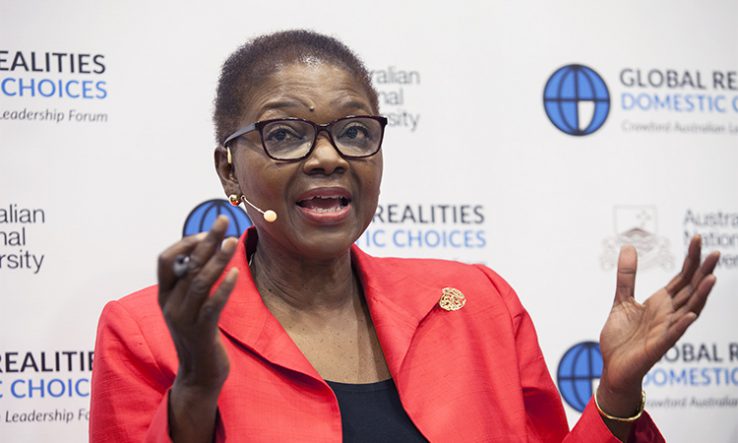 This Black Lives Matter moment is a chance for universities to change, says Valerie Amos

It’s been a deeply emotional few weeks since the killing of George Floyd. Anger, grief, despair. Feelings of hope and hopelessness. A coming together of voices raised in defiance of racism and its pervasive and pernicious impact on our society.

Racism affects us all, whether we’re aware of it or not. It is part of the legacy in a society that has prospered as a result of its imperial and colonial past. I would not be in Britain were it not for that history. I am the product of a slave trade that saw people forcibly taken from countries on the African continent to work on plantations in the Caribbean, South America and the United States, with the profits brought back to Britain to build its wealth and global influence. It’s a history we need to own collectively.

I am struck by those who say to our young people—to people like me—‘leave our history alone’, as if it’s not our history too. As if, for example, men of African, Caribbean and Asian descent did not lose their lives serving in the British army in the fight for freedom from Nazism and oppression in the second world war.

How, as a nation that prides itself on its education system, with free full-time compulsory education for children between 5 and 18, do we find ourselves in a situation where so many people don’t understand the bare bones of that history?

I received a letter recently from an alumnus of Queen’s College, Oxford, who said he was “saddened that I was destined for high office at the same university, a place for the advancement of learning, wisdom, debate and sound reasoning and broadening of the mind, not the destruction of the history and heritage of this country”. He saw absolutely no contradiction between that statement and wanting to shut down debate and discussion about Britain’s past, how it has informed our present and how it will continue to influence our future.

It is tough to explain the pernicious and debilitating impact of day-to-day racism—the microaggressions. We all experience and deal with it differently, but just because we don’t talk about it doesn’t mean it‘s not there.

It shouldn’t have taken a nine-minute film of the breath being squeezed from a man in Minneapolis for us to take a serious look at where Britain is in 2020. The scorecard is seriously lacking.

As director at SOAS, I am asked constantly about the deep racial and ethnic disparities across higher education and why they’re so persistent. Why are there only around 25 black women out of almost 19,000 professors in the UK—and only 400 professors from a black and minority ethnic background in total? Why is there still a stubborn pay gap between black and white academics doing the same jobs? Why does the black attainment gap widen rather than narrow for students? Why are black students more likely to drop out of university, entrenching the disadvantage rather than addressing it?

Given the above, I am not surprised at the cynicism and questioning of the commitment of university leaders that has surrounded some of the institutional statements supporting Black Lives Matter. There remains a deep structural and systemic discrimination in higher education. There is far too much complacency—a refusal to really accept that the concrete ceiling for black students and staff is there.

How many more excuses can we come up with? That black staff and students are not good enough. Don’t have the right experience. Too often I’ve heard senior people asking for more and more data, more evidence to be convinced that a problem staring at them is real. Too often we have patted ourselves on the back because ‘we’re not as bad as other sectors’.

The truth is, collectively, our record is as bad as, if not worse than, that of other sectors. That doesn’t mean we haven’t made good progress. But it’s not enough. There are some excellent examples of good practice. We refer to some of them in the joint Universities UK and National Union of Students report on the BAME attainment gap published in 2019, but initiatives are not enough. We have a case to answer. We are not all bastions of inclusivity. Our students tell us that all the time. Culture change is tough and takes time. Race equality is not a bolt-on or a luxury.

I have spent a substantial part of my working life campaigning for equality and social justice. I have sat on committee after committee, making recommendation after recommendation about what needs to change. I am not naive. I don’t think the kind of transformative change needed can be delivered by universities on their own. It’s a responsibility for all leaders in every institution in the UK.

But this is a moment, potentially, of profound change in the public mood. We’ve wasted chances like this before. We mustn’t waste this one.

Valerie Amos is director of SOAS, University of London, and in September will become master of University College Oxford.