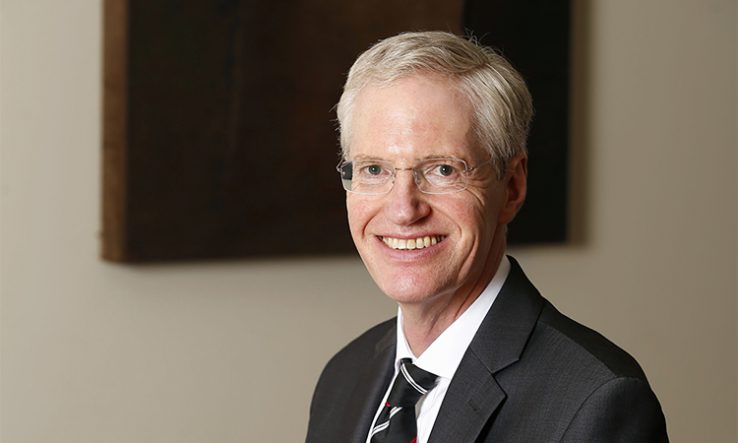 The Open University, which turns 51 this year, has grown to be the largest university in the UK, with more than 160,000 students around the world studying remotely at home or at work.

It has always been a ‘screen’ university, initially using televised lectures alongside high-quality printed course materials and then increasingly using digital media, so that today its courses are designed for learning using laptops or mobile devices, and are accessed using the internet.

While the Covid-19 outbreak has brought challenges, the OU’s teaching and learning model has proven highly resilient during the crisis. Whereas other universities’ online offerings are often essentially versions of their face-to-face teaching, the OU’s courses are designed for digital rendering from the start. This enables, for example, formative tests, social media and learning analytics to be built in as part of the course design and pedagogy, supporting step-by-step learning gain as students progress through their modules.

Unlike many other institutions, the OU teaches practical science and engineering using digital media, including unique facilities that allow students to operate equipment remotely and learn practical skills at a distance.

Nor have its costs meant that it has had to set its tuition fees in England at the maximum fee cap. There is now an issue for universities that charge these fees for a campus experience but are having to pivot much of their teaching online to manage the continuing virus threat.

The OU’s scale enables it to charge a fee in England significantly lower than the maximum, while fees in Scotland, Wales and Northern Ireland are even lower because their governments provide more generous grants.

This does not mean compromising on student support. Even though OU modules often have thousands of students studying on them, teaching takes place in small groups. And because the OU is ‘open’, with no entry requirements for most of its undergraduate qualifications, considerable thought is given to how to support students’ learning with regard to their diverse backgrounds.

This model has survived policy disruptions—such as the huge teaching grant cuts in England in 2012 that forced fees up beyond what many adult part-time learners could afford—and now the Covid-19 outbreak.

Adapting to these changes means the OU has seen its student profile change. Scotland, Wales and Northern Ireland now account for a higher proportion of its total student numbers, and in England an increasing number of students are young and studying at full-time intensity. More young people are coming to see the OU offer as competitive, especially if they do not want to relocate to a residential university.

Flexibility—the ability for students to learn anywhere, any time—is what has made the OU’s model so robust. It has not sought to compete with the campus model that is so attractive to many young people. The OU’s students are often juggling work and family commitments with study and do not receive the maintenance loans that support the—very expensive—dominant residential model of UK higher education.

During the Covid-19 crisis, online education has rapidly become normalised. Most universities are promoting their virus-safe blended online and face-to-face approaches, usually for a far higher fee than the OU’s. It is very unlikely they can match the quality of the OU’s provision across the board, honed after decades of investment and experience, but in England their cost structures mean they must charge fees at the maximum fee cap, especially—certainly for next year—because these costs will not be as strongly subsidised by international students relocating to study in the UK.

Sadly, it is often not the quality of what a university does online or face to face that determines how good it is seen to be, but rather how academically selective it is. The highly selective Russell Group institutions are the grammar schools of the higher education system. Demand for their places has the same effect as grammar schools on nearby comprehensive schools, essentially ‘creaming off’ students who would otherwise mix with others in more socially and academically balanced institutions.

The effect is so strong that the UK government, concerned about fewer students taking up places at university in the aftermath of the virus outbreak, has reintroduced student number controls for the coming year to stop more prestigious brands destabilising less prestigious ones as they seek to overcome shortfalls in their numbers.

This type of competition has not worried the OU, since its students are generally adults in work, who are less concerned about prestige and more concerned about finding a flexible way to study for a useful or interesting degree. The university’s social profile is broadly typical of UK society, making it a truly comprehensive university. On some measures it overperforms—students with disabilities total more than the whole of the student population at a medium-sized university—while on other measures it has more to do, such as increasing the attractiveness of its offer to black, Asian and ethnic minority students.

Because the OU’s emphasis has been on flexibility, what it has tended to highlight less in its marketing and promotion is the sheer quality of its courses. However, the Covid-19 crisis is now leading us to make our offer more visible to young people who may be worried about commuting or relocating to study.

For the first time, the OU will run a major campaign during clearing, based on the quality of its qualifications and value for money. It will be doing this against the odds because young people, and their teachers and parents, have been led to believe that the less selective a university is, the less good it is.

We hope, however, that they will see the benefits of a university that is completely non-selective but is just as comfortable collaborating with Russell Group partners in doctoral training consortia as it is working with further education colleges on widening access; and that has produced more chief executives and managing directors than any other UK university, and more graduates for the world’s largest tech companies than any British university other than Oxford and Cambridge.

As it gets older, the OU may be about to become even younger.

Tim Blackman is vice-chancellor at The Open University.