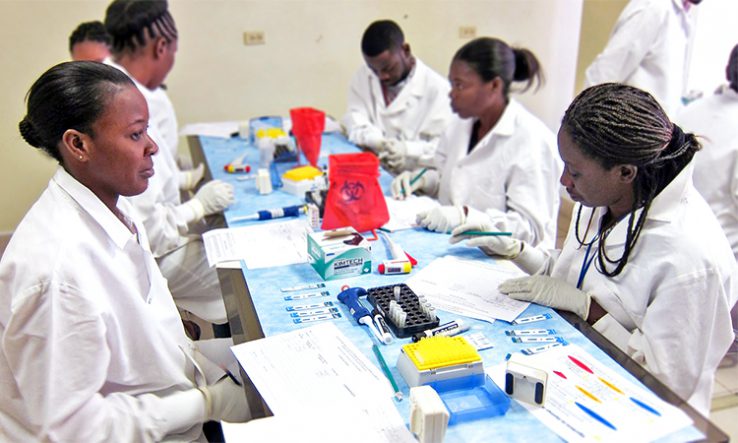 Crisis has reduced publications by women in South Africa

Women scientists are suffering from the African response to the Covid-19 pandemic, and worse may still be ahead, a webinar has heard.

The webinar hosted by the Academy of Science of South Africa on 26 August saw women scientists from the continent speak out about the work pressures that have arisen due to Covid-19.

Fanelwa Ngece-Ajayi, a chemistry professor at the University of the Western Cape, said that the South African Young Academy of Science had already seen a dip in publications by women researchers because of the pandemic.

This mirrors global patterns whereby the impacts of the pandemic on academic work, especially the loss of child care, have disproportionately affected the careers of women researchers.

For example, a survey carried out by the Organization for Women in Science for the Developing World (OWSD) on its members, published at the end of June, revealed that half the respondents reported spending much more time than usual on household chores than before the pandemic.

The survey found that the share of household work that fell to respondents—1,470 female  scientists in 85 countries—had increased due to Covid-19.

The survey also found unforeseen positives from the pandemic for women researchers, the webinar heard.

Jennifer Thompson, the president of the OWSD, said its members had experienced an increase in visibility and public engagement opportunities. Some women also noted fewer distractions during lockdowns, and more time for meditation and reflection.

But others warned that women scientists still face an uphill struggle in male-dominated science systems and academia in Africa.

“We have to put in triple the effort to just survive,” said Nokuthula Sibiya, the deputy vice-chancellor for teaching and learning at the Durban University of Technology.

Women remain under-represented in African science. Only 17 per cent of the African Academy of Sciences’ 350 fellows are women, Catherine Ngila, the organisation’s executive director, told an African Union webinar on Covid-19’s impact on African women that was also held on 26 August.

Ngila said that “women should pull up their socks” to increase their presence in African science.

Sarah Anyang Agbor, the African Union’s science commissioner, told the AU webinar that the pandemic had exposed “scientific and technological weaknesses” around the world and in Africa in particular. “We as women in science cannot be left behind. Inclusivity in action is necessary to win this fight,” she said.

Given that the pandemic was exacerbating inequalities outside science, too—by, for example, a rise in gender-based violence—Agbor added that the African research and science sector “needs to be more radical” in tackling problems for women.