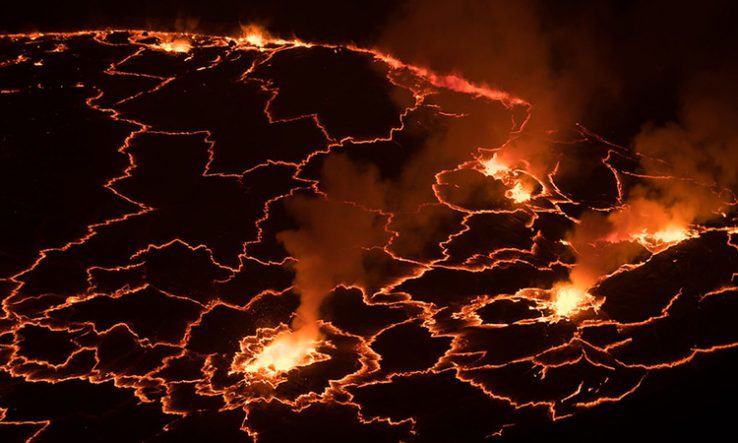 A heated row has broken out at a volcano research institute in the Democratic Republic of the Congo over claims by some of the institute’s researchers that “neocolonial” practices by partners in Belgium are impeding work to predict volcanic activity in the country.

The importance of monitoring the Nyiragongo volcano near the city of Goma in the DRC was driven home after an eruption in 2002 that killed hundreds, and the volcano erupted again this year to deadly effect.

But a union representative for staff working at the Goma Volcano Observatory (GVO) has hit out at their partners in a letter to the DRC’s president Félix Tshisekedi, making several criticisms.

Alongside allegations of corruption, mismanagement and underfunding domestically, the letter outlines other allegations against “foreign partners”, including the Royal Museum of Central Africa (RMCA) in Belgium, which has a history of working with the GVO on monitoring local active volcanoes.

One researcher at the museum has already strongly defended his organisation’s work in the region.

The letter, dated 2 June, comes as many academics in Africa and Europe struggle to redress power imbalances in research partnerships linked to Europe’s colonial history in Africa.

But the letter also says “a small group of neocolonialist scientists” is calling the shots at the observatory to the detriment of science and local people.

The group claims that a lack of resources, combined with a foreign-dominated agenda, contributed to staff at the observatory not being able to predict the eruption in Goma on 22 May, which claimed dozens of lives and displaced thousands.

The group alleges that “foreign partners” like the RMCA, have carried out projects at the observatory that “haven’t had as an objective to improve the capacities of the observatory to survey the active volcanoes at Virunga and Lake Kivu”.

But a scientist from the museum has rejected these claims and a group of 31 researchers from the GVO have sent their own letter saying they were not aware of the first letter and do not recognise the claims it makes. According to a source at the observatory, there are 351 staff working for the GVO.

François Kervyn, from the RMCA’s natural hazards and cartography unit, denied the charge of neocolonialism, saying he had the support of the Congolese minister for scientific research. He said of the letter “we have been very surprised by these allegations, which we consider very unfair”.

Kervyn also disputed the suggestion that the museum has not built research capacity in the country. “Over the past 15 years the RMCA has assisted the GVO and enabled three of its staff members, including the current director, to complete a PhD in Belgium,” he told Research Professional News.

He added that the RMCA had assisted with seven master’s degrees and other training for GVO staff. The framework of the museum’s collaboration with the observatory was developed and implemented locally to reinforce the monitoring capacities of the GVO, he said.

“Our contribution cannot and must not be considered as a substitution of the daily work of GVO’s seismology department, whose primary mission is the continuous monitoring of the seismic activity at the volcanoes and in the Lake Kivu region and the detailed analysis of individual events that occur,” said Kervyn.

Kervyn also said data generated through the seismic equipment network deployed and maintained in collaboration with the observatory were shared with GVO in real time.

In an email to Research Professional News, the chief signatory of the GVO letter, Innocent Zirirane, did not dispute that GVO staff had received training with the museum’s team. However, he said this was often not suited to the work they needed to do.

“Concretely, they have not really trained any of our researchers to process the data that they themselves [the museum] collect from us,” Zirirane said.