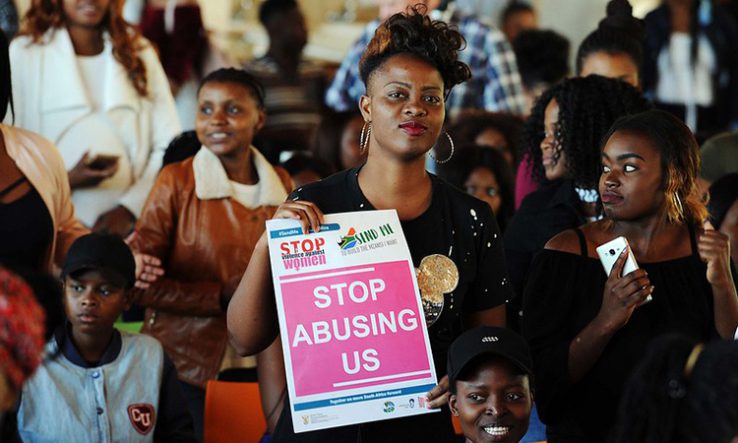 However, the policy framework released on 3 August is slim on short-term action, and won’t ask universities to meet its demands for clear complaints procedures and gender policies for more than two years. It also sets out further work to be done to scope out the extent of GBV in universities.

Commenting on the document, Belinda Bozzoli, the Democratic Alliance shadow minister for higher education and science, said: “What we need on GBV is something more than overviews and surveys.”

Others were more supportive. Rebecca Ackermann, founding director of the Human Evolution Research Institute at the University of Cape Town, said: “The [policy framework’s] strategic objectives of creating an enabling environment, growing prevention and awareness programmes, and supporting and assisting GBV survivors are all laudable goals. Our hope is that these initiatives will rapidly and effectively move from policy to practice."

The framework says that the Department of Higher Education and Training will set up a task team to report on the “extent and scope of sexual offences in universities”. The team will advise minister Blade Nzimande on addressing gender-based violence in universities and implementing the policy framework.

Higher education institutions will also be required to have GBV policies in place by the end of 2022 that are in line with the Department of Higher Education’s “minimum standards”—which the document does not specify.

Other actions in the framework include a “charter on GBV” that will be issued by the end of 2022 that will have to be signed by all staff and student leadership bodies at higher education institutions, a “GBV colloquium” to create awareness of and prevent GBV, and a biennial stakeholders forum to gauge progress on the policy framework’s goals.

“Prior training in GBV” will also be a requirement for all contractors working with universities. A register of offenders that would guide appointments is a possibility over the short term, the framework says.

The policy framework has been drawn up by a team appointed in May 2019. High-profile incidents in the second half of that year, including the murder of University of Cape Town student Uyinene Mrwetyana, led to increased calls for urgent government action against GBV at universities.

Action on gender-based violence in universities is long overdue, the document acknowledges. Institutions have been asked to address sexual harassment and rape in their institutional cultures since 1997, it notes. “Two decades later, it is apparent that progress in this regard is not as advanced as it ought to be. It is thus necessary to establish accountability structures and procedures to ensure this goal is realised.”

“The policy framework compels institutions to both create awareness of GBV policies and prevent incidents of GBV,” said Blade Nzimande, the higher education and science minister, in a statement issued with the document.

But Bozzoli said her party, the DA, wants a dashboard for gender-based violence events to be created for universities. It also wants punitive actions to be set out, with universities reporting annually on corrective actions. “This would include such items as how many instances of GBV occurred on campus, what was done about each, and tracking of each to the point of prosecution,” she told Research Professional News.