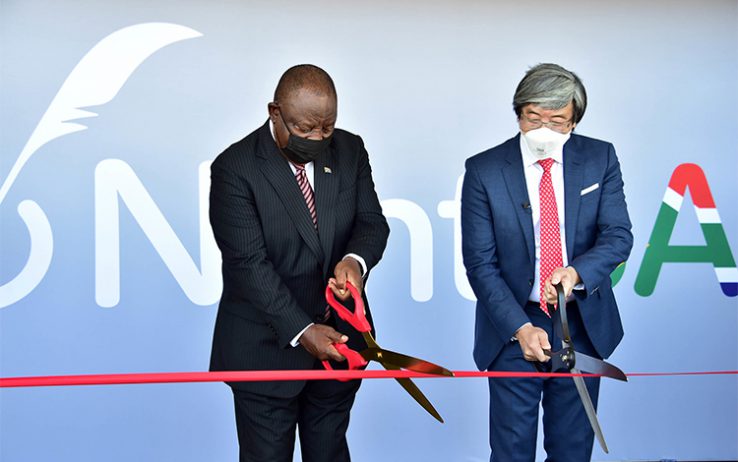 The Nantsa facility, located in Brackenfell, is part of a R3 billion (US$200 million) deal that the government of South Africa announced with health tech and life science company Nantworks in September last year. Nantworks’ founder is South Africa-born Patrick Soon-Shiong (pictured, right), who also addressed the launch.

The facility will aim to be up and running within a year, and will aim to produce 1 billion vaccines by 2025, Soon-Shiong told the launch, starting with Covid-19 vaccines. It will produce so-called dual antigen vaccines, which target both the mutation-prone spike protein that SARS-CoV-2 uses to infect cells, but also the nucleocapsid protein that envelops the virus’ nucleus. The nucleocapsid protein has been shown to remain more stable over time, which could allow vaccinations to stay effective for longer.

It will be the first South African plant to manufacture its own active drug compounds. Other drug production facilities in the country import those compounds from abroad, an approach known as “fill and finish”.

The facility is expected to create 400-600 jobs. Plants are also planned elsewhere in Africa, including in Botswana, Ghana, Kenya and Uganda, Ramaphosa said. He said the facility was part of a continent-wide ambition to enable Africa to produce the lion’s share of the vaccines it requires.

A R100 million endowment from the Chan Soon-Shiong Family Foundation will support scholarships in biomedical science, Soon-Shiong announced. This will be done in partnership with the South African Medical Research Council and South African universities.

Ramaphosa said the new facility will help “shed the colonial chains that have always bound us”, which he said had been emphasised again during the Covid-19 pandemic: “Bit by bit those colonial chains are being broken.”