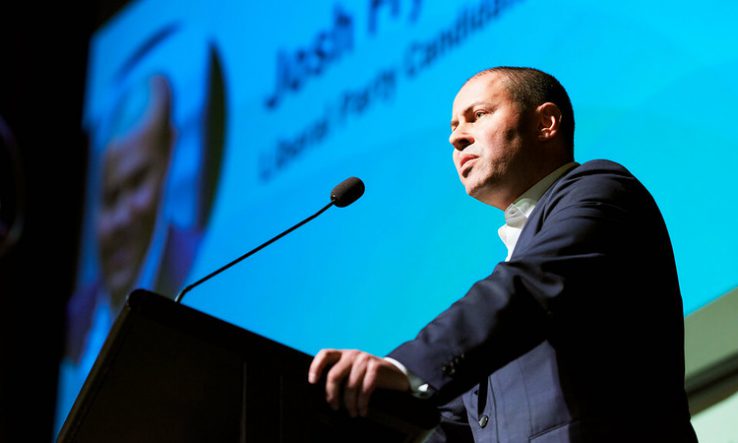 The Australian federal budget, presented on 6 October by treasurer Josh Frydenberg (pictured), has provided a A$1 billion rescue package for university research.

The extra funds will be channelled through the existing research support programme over the course of 2021, with the first payments to be made in January.

“The government clearly understands you can’t have an economic recovery without investing in research and development.”

The budget confirmed the government’s commitment to supporting extra university places and “short course” places with provision for A$550.3 million in direct funding, spread over four years from this year. Of that total, A$298m will go towards creating 12,000 university places.

A A$40m Strategic University Reform Fund will be created to “bring together universities and local industries to partner on innovative reform projects”, while A$5.8m was allocated to a scoping exercise on the way to creating a University Research Commercialisation Scheme “to better translate and commercialise university research outputs”.

Much of the budget’s other new spending on education went to vocational education and training, in line with the government’s focus on job creation and workforce skills. Some A$263m has been earmarked for improving data management and basic literacy and numeracy training, and there was a A$75.9m boost for the Department of Education, Skills and Employment.

Outside universities, meteorology and nuclear science were the big research winners. The Bureau of Meteorology will receive A$254.6m over four years, the budget papers say. The bulk of the funding will go towards asset maintenance, at A$225.6m, to “allow the bureau to safely respond to multiple concurrent weather emergency events during times of natural disaster”.

The exact level of funding to protect the bureau’s network of observation technologies has not been specified, due to commercial sensitivities.

The Australian Nuclear Science and Technology Organisation will receive an extra A$238.1m over the next four years. The organisation’s governance and commercial arrangements will be reviewed by the Department of Finance. The organisation operates the Opal reactor, the Australian Synchrotron and the National Imaging Facility Research Cyclotron, as well as providing access to nuclear-based tools and working with health and environment researchers nationally.

The budget featured A$157m for a three-year commitment to implementing the 2020 Research Infrastructure Investment Plan. This year’s investment plan is yet to be released, but four new projects were revealed in the budget: A$36.3m for a simulation programme to help save the Great Barrier Reef; A$8.9m towards humanities, arts, social science and Indigenous e‑research platforms; A$8.3m “to establish new synthetic biology research infrastructure to facilitate rapid responses to emerging disease”; and A$7.6m to upgrade the Australian Community Climate and Earth System Simulator “to increase Australia’s capacity to respond to future climate disasters and emergencies”.

Another A$86m will go to the Future Drought Fund, which assists industry and helps fund research into drought resilience.

A budget report from the National Australia Bank noted that several items on researchers’ and companies’ wish lists had not been included in the budget. Research Australia had called for the government to commit to increasing research funding to 0.75 per cent of GDP in its term, and industry bodies had sought a research translation fund to help commercialise university research.

Frydenberg said in his budget speech that “research and development, the adoption of digital technology, and affordable and reliable energy will be critical to Australia’s future economic prosperity”, announcing the lifting of caps on R&D tax rebate claims.

The budget includes a provision for A$1.7bn to fund the rollout of a coronavirus vaccine. The Treasury’s forecasts assume that a vaccine will be available by the end of 2021. To mitigate the effects of the Covid-19 crisis, the Commonwealth Scientific and Industrial Research Organisation will receive an extra A$459.2m over four years.