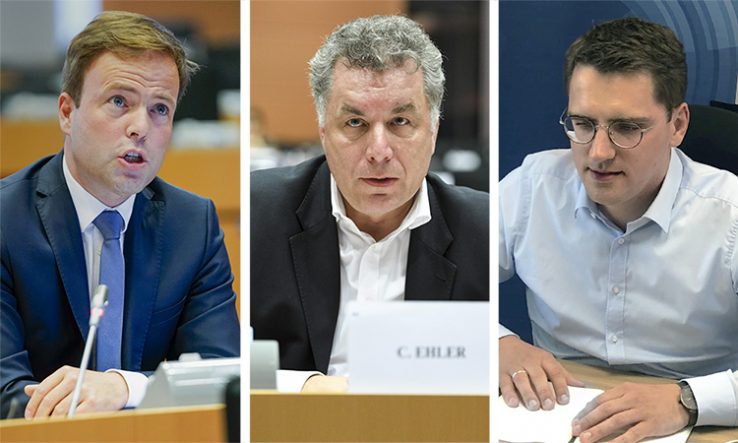 More than 300 researchers and over 50 MEPs have signed letters urging the European Commission president Ursula von der Leyen to strengthen her attempts to reverse planned cuts to the proposed budget for the EU’s next R&D programme, Horizon Europe.

In a 5 November letter co-signed by 49 of their colleagues, MEPs Christian Doleschal, Christian Ehler and Sven Simon (pictured right, centre and left, respectively) warned von der Leyen that acquiescing to the lower budget for the 2021-27 programme settled on by national leaders in July would “weaken Europe’s position as an attractive location for world-leading research” and be a “historic mistake”.

Whereas the Commission initially proposed a Horizon Europe budget of €94.1 billion, and the European Parliament wants €120bn, national leaders in the European Council agreed in July that they want a budget of €85.5bn. The Council and Parliament have spent weeks trying to reach a compromise, as yet to no avail.

“European universities and research institutes need to remain competitive with North America and East Asia, [and] for this sufficient EU funding is necessary,” the MEPs said. “We trust in your leadership on this crucial issue for the future of the EU.”

The MEPs forwarded von der Leyen another letter making similar pleas that has been signed by more than 300 researchers, including several Nobel laureates. These include cell biologist Paul Nurse, who was recently elected deputy chair of the Commission’s Group of Chief Scientific Advisors.

Published on the dedicated website rescue-horizon-europe.org, the researchers’ letter warns that the “drastic cuts” to the proposed Horizon Europe budget “will have devastating effects on our ability to address major challenges of our times—including climate change, pandemics, quantum technology, artificial intelligence or personal medicine”.

If the Council’s preferred budget is adopted, it will “inevitably lead to exodus of scientific excellence, technological dependencies, and diminished patient care”, said the researchers led by Antonia Weberling and Nathalie Conrad, fellows of the EU’s Marie Skłodowska-Curie Actions scheme.

Thomas Estermann, director of governance, funding and public policy at the European University Association, said his organisation—which represents more than 800 universities—backs the push.

Although funding for priority programmes including Horizon Europe remains a stumbling block in the negotiations on the 2021-27 EU budget framework, another obstacle fell on 5 November with the announcement that the Parliament and the German presidency of the Council have reached a provisional agreement on linking member states’ receipt of funding to their compliance with EU law.

The agreement, which must now be formally adopted, “established a mechanism that enables the EU to stop funding governments that disrespect our values such as the rule of law”, said one lead MEP, Petri Sarvamaa.

A proposal to withhold funding would be initiated by the Commission, and would have to be agreed by the Council through a qualified majority vote. According to the Parliament, steps could be taken even when there is only a risk that a breach of EU values would directly affect the EU budget.

“Threatening the independence of the judiciary, failing to correct arbitrary/unlawful decisions, and limiting legal remedies” could all provide grounds for action, according to the Parliament. In recent years the governments of Hungary and Poland have come under fire for potentially or officially contravening EU law, with the European Court of Justice ruling in October that Hungary breached the law with its reform of higher education rules.

MEPs said the deal would not negatively affect funding for researchers in countries found to be in breach of the law.

“We also made sure that any potential sanctions for a member state will not affect the ultimate beneficiaries of EU funds,” said another lead MEP, Eider Gardiazabal. “Researchers, recipients of grants or businesses should all know that they won’t be hit by the consequences of their government’s breach.”