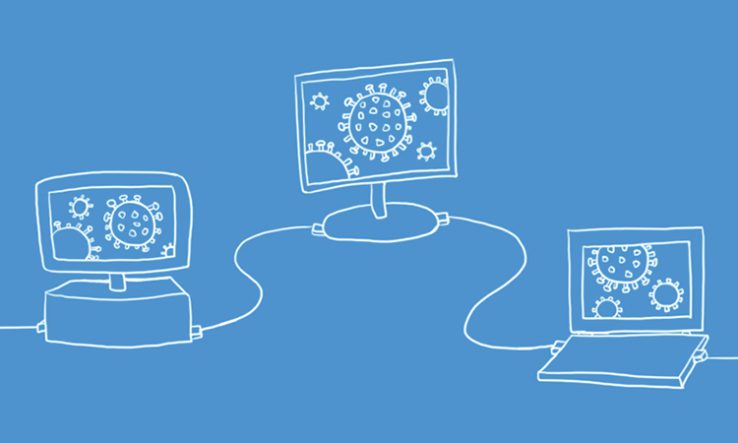 Covid-19 has pushed forward open science—but will the changes outlast the virus?

On 11 January 2020, the complete genetic code of a previously unknown coronavirus, sampled from Wuhan, China, was posted on Virological, an online discussion forum for viral evolution. Within days, it was joined by a handful of other genomes, all collected from the victims of a mysterious respiratory disease plaguing the city.

“A lot of credit needs to go to those first Chinese scientists,” says Emma Hodcroft, a researcher at the University of Basel who spends most of her time working on Nextstrain, an open, online visualisation and analysis tool for tracking pathogen evolution. Her Chinese colleagues’ rapid sequencing and their decision to share the genome immediately set a global precedent, she says.

Nextstrain is essentially a tool for making brightly coloured, interactive, viral family trees. Its visual appeal incentivises contributors, but it also gives confidence to other researchers and public health officials entering the field. “People are much more willing to incorporate that advice when they make decisions because we’ve made it much more accessible,” says Hodcroft. “It’s exciting to see where your sequence will go in the tree and how it relates to other countries.”

When an influenza monitoring study in Seattle began testing participants for Sars-Cov-2, the virus that causes Covid-19, Nextstrain users were able to show that the infections were all part of one transmission chain, rather than separate cases imported individually from elsewhere. Such research, done promptly, could save lives.

In a crisis, tools must be repurposed. Nextstrain, a project originally set up to monitor influenza viruses, is just one of the internet services that has been seized upon by researchers worldwide who have inadvertently sketched out a new model of rapid-response science in the process.

In a pandemic, speed is of the essence. Microblogging site Twitter and the use of preprints, unreviewed early versions of scientific papers, have turbo-charged work by allowing rapid publication and dissemination of Covid-19 research. “Preprints were almost poised for the pandemic,” says Jonathan Coates, a postdoctoral researcher at Cambridge University. His research into the use of preprints during the pandemic suggests biomedical research culture might be following fields like physics, “where you preprint everything, and then publication is more of a formal process”. Covid-19 preprints tend to be shorter than other work posted on the same biomedical hosting sites, which Coates says points to a different way of working. “The dissemination is sped up—you don’t have to wait to get a complete story.”

These proto-publications are not just small and fast, they have also been influential—the UK’s science advisory group for emergencies and its parliamentary research service both use them to guide decision-makers. But this can amplify mistakes as well as catch them. One now-discredited preprint was shared more than 30,000 times on Twitter.

The use of open forums for Covid-19 research has been both a blessing and a burden for those working full-time to try to understand it. Twitter is a more interdisciplinary forum than many established spaces for scientific discourse, says Lucy van Dorp, a researcher at University College London, who uses the platform to collaborate with colleagues and communicate with the public.

“You have new opportunities for people to work together who perhaps wouldn’t previously,” she says. “It comes directly from the horse’s mouth, the scientist can comment on the work and respond to questions.” And that sometimes includes “Twitter peer review”, with users vetting the unreviewed preprints that package Covid-19 work. Van Dorp says this openness, and the speed that data are generated, challenges the way researchers traditionally work. “Should we be taking longer to do good science on a dataset that’s out of date?” she asks.

Away from the bright lights of social media, policymakers are putting money into more formal approaches to Covid-19 data-sharing. The EU Covid-19 Data Portal, run by the European Molecular Biology Laboratory’s Bioinformatics Institute, collects genetic sequences, but also other Covid-19 relevant molecular biology and clinical data. “The real value comes from the totality of the data,” says Guy Cochrane, coordinator for the portal project. An innovative part of its design is the ‘hubs’, which means the same formatting is used when sharing data locally and when it is later pooled publicly.

Like other tools, part of the strength of the European Commission-funded portal is in building bridges between public health officials and researchers, for which communication is essential. Cochrane’s team has written software and had Zoom calls to help frontline testing staff upload their data, for example.

Cochrane hopes his team, which is roughly 20-strong, can be grown to about 30 full-time equivalent staff and stay at that size for the next few years. A big question for policymakers is how other beneficial projects and practices that have evolved during the pandemic can be expanded and cemented in the long-term.

On 8 June, the Council of the EU called for “the promotion of data exchange between researchers, as well as improved access to emerging scientific evidence”, and a UN consultation is currently gathering feedback to draw up global standards for open science.

“Politicians have understood the power of this earlier than many of the more established research communities,” says John-Arne Røttingen, head of the Research Council of Norway. “They see their investment in science as a public good, so their rationale is that this should be exploited as much as possible.”

Hodcroft would like to see new centres that ensure researchers and public health officials can continue collaborating. They could bring together “the best of scientific research and the continued access to data and resources of public health,” she says, adding that efforts should focus on virus families that usually cause mild illness, such as coronaviruses.

If open science can be shown to have saved lives during the pandemic, advocates hope it will be sure to stay in place thereafter.