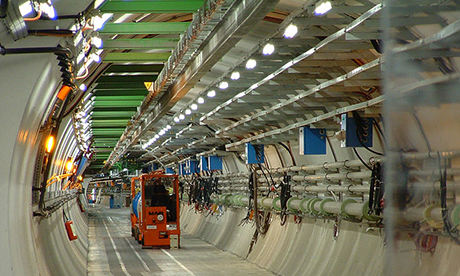 The Polish government has urged other countries on the governing board of Cern, Europe’s organisation for nuclear research, to cut the lab’s ties to Russia at a crunch meeting next week.

Cern is home to world-leading infrastructure for research on nuclear physics, including the Large Hadron Collider particle accelerator. Its member states are next week due to vote on suspending the lab’s international agreements with Russia in response to the invasion of Ukraine.

“I am convinced that we have to do this,” Poland’s state secretary for science, Wojciech Murdzek, told EU research ministers on 10 June.

He warned that Cern “cannot be hostage to Russia’s authoritarian regime”.

In March the Cern Council voted to suspend Russia’s observer status as well as some roles for individual researchers, including around appearances on committees. Now Murdzek wants the lab near Geneva to go further at the meeting on 16 June.

Suspending the international cooperation agreement with Russia would put a much more significant freeze on Russian contributions to, and benefits from, Cern’s research infrastructure and activities. Poland also wants Cern’s agreements with Belarus suspended, as the country has supported Russia’s aggression. Links to the international Joint Institute for Nuclear Research (JINR) in Russia should also be severed, Murdzek said.

Cutting these ties would be “a very difficult decision”, but is one the Cern Council must take, he said.

Murdzek warned that the decision could lead to “higher costs” and delays at the home of the Large Hadron Collider and site of many key discoveries in physics. But “member states will have to face up to the challenge”, he said, as nations “cannot make the same mistakes that we did as we were growing dependent on Russia’s natural resources”.

Murdzek was speaking as EU ministers adopted a statement condemning the Russian invasion, along with positions on reforming research assessment and R&D missions.

He said he hoped the adoption of the statement meant that freezing Russian and Belarusian ties to Cern would be “purely be a formality”, as 18 EU states are also on the 23-member Cern council, and only 16 votes are needed there to pass the suspension.

“I appeal to you all that you make sure that your representatives in the Cern Council vote in accordance with what we have adopted today,” Murdzek told the gathered EU representatives. “I know that other countries which are not EU members are also on our side.”

Cern told Research Professional News that previous actions taken by its Council “effectively prohibit any new activity with Russian and Belarus institutes, as well as with the JINR”.

It added: “Russia is not a Member State of Cern; there are currently around 1,000 researchers with Russian affiliation, and Russia contributes to the operation of the experiments in proportion to their participation. Suspension of the International Cooperation Agreement would entail the ceasing of this participation.”

Update 10/6 – This article was updated with the Cern comment.