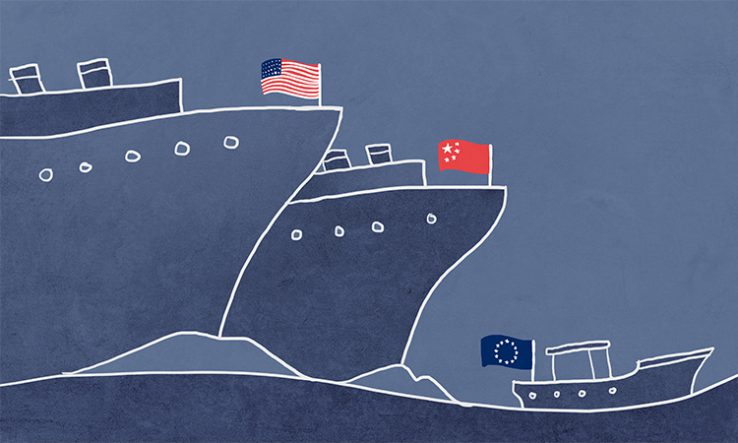 Globalisation has given the western world access to a cornucopia of products and talents that in centuries past would have remained trapped behind national borders, and has driven down costs for consumers. But it has come with unwanted side effects, one of which has now risen to the fore in the EU: import-dependent supply chains heavily at the mercy of international relations—and pandemics.

In recent years, and more so since Covid-19 re-erected barriers on European borders, EU leaders have stressed the importance of the bloc being able to look after its own in relation to its most important technologies.

The aim of this ‘strategic autonomy’, or technological sovereignty, is to protect European industries and societies from breakdowns in trade flows with international partners, such as China and the United States. It also entails building up European companies so they can compete with US and Chinese giants, such as Amazon, Apple and Huawei.

Now, with the issue of access to medical supplies thrust into the spotlight by the Covid-19 pandemic, strategic autonomy has been named as a priority of the German presidency of the European Council, which will shape member states’ EU-related policy work for the July-December term. Specifically, the presidency has its eyes on digital technologies and medical supplies.

The unpredictability of our globalised world makes strengthening autonomy seem an obvious choice—what country or continent would not want the power to act independently? But the concept conceals a surprising number of conflicts and compromises.

On 15 July, the EU’s single market commissioner Thierry Breton addressed a crowd of businesspeople at a virtual version of the Hannover Messe, usually one of the world’s largest trade fairs. “Sovereignty—or what others call resilience or strategic autonomy—is not about isolating ourselves,” he said. “It is about Europe defending its strategic interests.”

Breton’s remarks on the terminology reveal its ambiguity, which some say is deliberate. A 2019 analysis of strategic autonomy by Ulrike Franke and Tara Varma, of the European Council on Foreign Relations think tank, traced the revival of the concept to a 1994 French white paper on defence reform. But they said it “remains vague partly by design…so that potential supporters can project their ideas onto the concept and back the initiatives it creates—despite a basic lack of agreement as to its meaning”.

These divergences on the meaning and ideal degree of attainment of autonomy can feed into life-or-death conflicts—such as around the provision of medical supplies in the battle against pandemics.

In early March, as the pandemic in Europe was nearing its worst, Germany imposed a two-week ban on the export of protective equipment, in a move the European Parliament decried as “disgraceful”. The EU itself imposed export restrictions in April. Since then, the bloc has begun cooperatively building up shared stockpiles of equipment and making plans to avoid similar situations in future.

“Public health has become a geostrategic weapon that can bring a continent to its knees,” MEP Nathalie Colin-Oesterlé, the lead on a Parliament report on EU medicines shortages, said earlier this month. Her report, which was backed by the Parliament’s health committee by 79 votes to 1 on 14 July, calls on the EU to relocate production of some medicines to Europe, and build up a reserve of medicines that are strategically important.

According to the Parliament, 40 per cent of medicines marketed in the EU come from non-EU countries, while 60-80 per cent of their active ingredients are made in China or India. The centre-right European People’s Party political group, to which Colin-Oesterlé belongs, backs new public procurement rules to ensure access to medicines—such as requiring national buyers to pick drug makers based on whether they have production sites in Europe, as well as the price of their pills.

But the idea of onshoring drug manufacturing has been met with scepticism from the pharmaceutical industry itself.

The European Federation of Pharmaceutical Industries and Associations, an umbrella lobby group, warned in response to EU plans that “the idea of ‘autonomy’ fails to recognise…clear reasons why some manufacturing does not take place in the EU”. These include not only cheaper labour elsewhere, but also that the EU can make more valuable medicines than other parts of the world, the group says.

The EU is at risk of “giving up its comparative advantage in cutting edge, high-value health interventions to instead produce lower-value products possibly at a higher price”, Efpia argued. It offered wildly different statistics to those cited by the Parliament, saying that most drugs and drug ingredients imported by EU countries come from other member states, rather than China or India.

According to Efpia, the EU should focus instead on supporting medicines R&D and international trade, such as by signing more treaties with China and pushing ahead with healthcare-related reforms of the World Trade Organization, which has faced increasing difficulties enforcing global trade rules.

But medicines are not the only area in which those pushing for or against globalisation will do battle in the months and years to come.

Speaking to the Parliament’s research committee on 16 July, German economics minister Peter Altmaier said that when he attended the Hannover Messe in 2019 he spoke to representatives of Nokia and Ericsson, two European telecommunications companies, and backed setting up an Important Project of Common European Interest—an EU designation that sidesteps state subsidy rules—so they could work together on the latest mobile internet format, 5G.

This technology is set for a European showdown in coming months, as Germany’s leader, Angela Merkel, decides whether China’s Huawei, the world’s leading provider of 5G equipment, will be allowed to continue to supply her country. The UK government has already decided to phase Huawei out of its networks, amid growing security concerns.

Germany’s decision rests on how the country and the EU can best secure their autonomy from two economies and governments that are at loggerheads: China’s, which rebuts accusations of state surveillance and control of Huawei, and that of the US, which has lobbied its allies aggressively against using Huawei products.

Europe’s battles for autonomy used to centre on the US alone—for example, whether the EU should be able to independently launch and control satellites, with all the communications and intelligence benefits they bring. David Henri, the chief executive and cofounder of Exotrail, a French company that makes propulsion systems for small satellites, says that concern has faded somewhat, but illustrates some of the issues at stake.

Henri told Research Europe that most of the components his company uses are available from suppliers in the EU, and that the microchips that must still be bought from elsewhere are unlikely to become scarce any time soon. But he adds there is a big difference between being able to source a functional component from a European manufacturer and sourcing the best components the world has to offer: “There is the question of performance.”

What the future holds

The German presidency of the European Council has said it wants to “strengthen the EU’s ability to take action and shape events with European sovereignty in mind”, especially around medicines supplies and data services, artificial intelligence and quantum technologies.

EU research ministers discussed the issue at an informal meeting on 21 July, after which Germany’s research minister Anja Karliczek said, “Excellent research, education and innovation are the key factors of success in achieving a sovereign, resilient and sustainable Europe.”

However, this came the same day that the Council decided to cut proposed funding for research, innovation and digitisation in the EU’s 2021-27 budget, prompting many in the R&D and education communities to cry foul.

Formal Council conclusions on EU sovereignty will come later in the year. Those anxious for European autonomy to be secured will be hoping the policies that emerge fare better than the funding lined up for their execution.

The presidential view on autonomy

Germany’s presidency of the European Council said it will “discuss approaches to further improving the supply of pharmaceuticals, medical products and personal protective equipment in the healthcare sector…to reach agreement on tangible measures to achieve greater autonomy in the EU with respect to safeguarding the supply of medicines”.

On technology, it said it wants to “establish digital sovereignty as a leitmotiv of European digital policy and…work together on responses for approaching technical developments such as artificial intelligence and quantum technologies to ensure that, in the context of fair competition, we increase our prosperity, protect our security and uphold our values”.