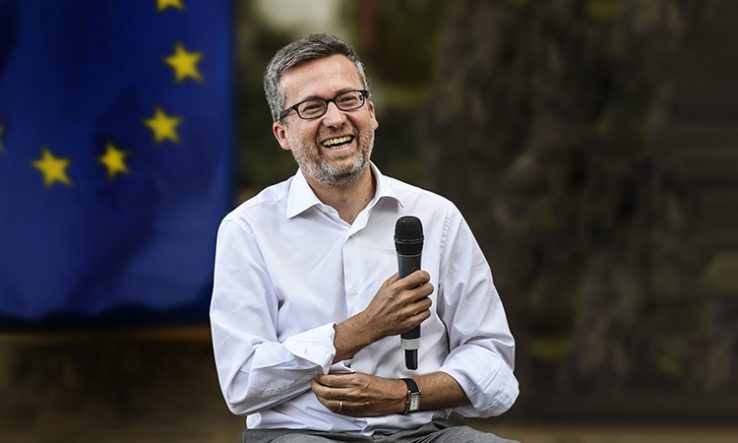 Carlos Moedas has said Europe must invest in what has been labelled the ‘third wave’ of internet innovation, rather than trying to compete with the giant companies of today.

The 2014-19 EU R&D commissioner said the continent led the ‘first wave’ of internet innovation, which laid down the physical infrastructure of the system.

But it missed out on the ‘second wave’, which saw companies based in the United States dominate the world of apps and social media platforms. Moedas believes this was because the second wave was based on the rapid rollout of digital developments at large scale. “And Europe—divided, fragmented, [composed of] countries with different regulations—could not give that speed and scale.”

Speaking publicly for the first time in his role as a visiting professor at the European Institute of University College London on 3 March, he said the bloc was better placed to ride the third wave.

The concept of the third wave—attributed to American businessman Steve Case—posits that the next technological stage will see the internet integrate into and transform physical world areas such as health, education and energy.

Merging the physical and digital

Moedas believes the third wave will be based on linking fundamental science to societal problems.

“You see that with artificial intelligence, quantum mechanics, machine learning—the next wave will be about that, and we are very good at that,” he said. “We have to invest in that third wave.”

Covid-19 has accelerated this “merger between the physical and digital worlds”, Moedas said, for example with educators and doctors previously reluctant to provide services digitally now embracing online opportunities.

The third wave will require interdisciplinary working, according to Moedas. But he warned that interdisciplinary R&D is hard, not least because diverse teams can struggle to work together. “It takes a lot of time, and a lot of politicians and countries decide not to do it because there’s a lot of failure.”

He also said that the EU had moved away from politically directed large-scale R&D investments—such as in the Future and Emerging Technology Flagships—in part because they were “not interdisciplinary enough”. These flagships allocated up to €1 billion over 10 years into models of the human brain and quantum technology, but they illustrated that top-down funding “was not working”, said Moedas.

By contrast, he said he had been told since he left his Commission post that the more bottom-up European Innovation Council he set up has been receiving proposals for “amazing projects that come from fields and intersections of fields that have never before happened in the EU”.

In addition to boosting its investment, Moedas said Europe needs to evolve its approach to legislation away from regulating a “snapshot” of whatever products and services currently exist. Instead he said regulations should be based on principles rather than products.

He said the US has deregulated over the past two decades, giving Europe an opportunity to lead the world on regulation in the third wave, as it has begun to do with things such as the regulation of digital companies through the General Data Protection Regulation.

The power of cities

Moedas—who is now running to be the next mayor of Lisbon—said he thinks cities will also become increasingly important players in issues of regulation and policy setting.

This has already happened to some extent, he said, with cities like New York or San Francisco taking their own, tough stances on climate change.

“The power of cities and importance of cities will become bigger and bigger”, he said.