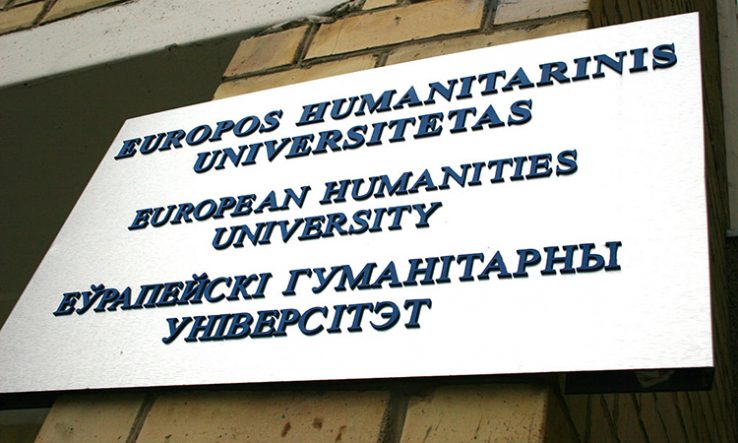 The European Humanities University has condemned the Belarusian government’s detention of Sofia Sapega, an EHU student who was detained with her boyfriend, the Belarusian journalist and activist Roman Protasevich, when a flight they were on was forced to land in Minsk on 23 May.

There has been an international outcry over the actions of the authorities, who forced the landing of the Ryanair flight from Greece to Lithuania after it entered Belarusian airspace. EU leaders have demanded the immediate release of Sapega and Protasevich, have called on EU-based airlines to avoid Belarusian airspace and intend to ban the country’s airlines from entering the EU.

EHU, which was forced to relocate to Lithuania from Belarus in 2004 and still caters to many Belarusian students, demanded Sapega’s release in a statement it issued the day after her detention, and called on the international community to help her. It said she is a Russian citizen who is a student on the university’s International Law and European Union Law programme, and that she was preparing to defend her Master’s thesis in Vilnius.

“EHU categorically condemns the impunity of Belarusian authorities and demands the fulfilment of international obligations of Belarus, as well as ensuring rights and freedoms of citizens, as provided in the Constitution of Belarus,” the university said, adding that it “insists on providing immediate consular assistance” to Sapega.

European Commission president Ursula von der Leyen said on 24 May that “the hijacking of the Ryanair plane by the Belarus regime is an attack on democracy”. She called for the immediate release of Protasevich and Sapega, saying their detention was “an attack on European sovereignty” and on freedom of speech.

Belarus’s president Alexander Lukashenko has been tightening his grip on the country in recent months, including through the detention of dozens of students in the country. It was during his 27-year presidency that EHU was forced to leave the country, when the government revoked its education licence.

Research Professional News has approached the Belarusian government for comment.