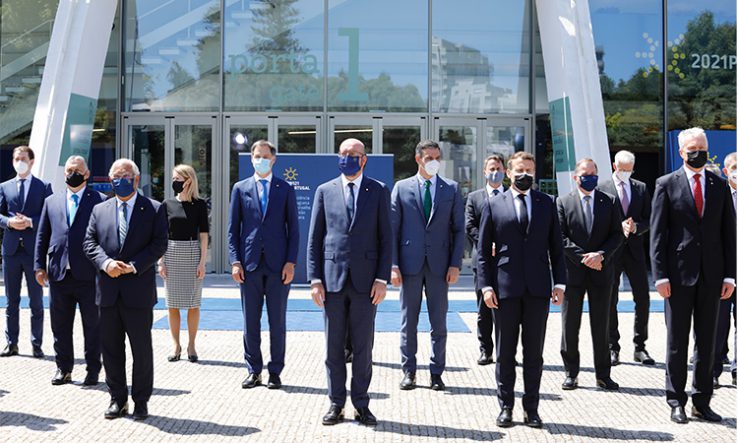 Heads of EU institutions and member states have poured cold water on a US-backed push to waive intellectual property on Covid-19 vaccines and treatments, saying that supporting manufacturing and freeing up exports are more important to boosting global production and delivery.

At a meeting of EU leaders in Porto on 7-8 May, the president of the European Council of EU member state governments, Charles Michel, said the bloc was “ready to engage” in talks on waivers when “concrete proposals are put on the table”. But he added: “We don’t think in the short term that it’s the magic bullet,” meaning a perfect solution.

This outlook was echoed by the European Commission president, Ursula von der Leyen, who said the EU should be “open to [a] discussion” on a waiver, but that this was “not a topic for the short term or the medium term”. She said there are three topics that should be tackled alongside talks on a waiver: vaccine exports, equitable procurement through the global Covax scheme and investment in global manufacturing.

Some national leaders argued more strongly against a waiver, which was proposed in October 2020 by the governments of India and South Africa and has been supported by the head of the World Health Organization.

“I don’t think waiving patents is the solution to supply the vaccine to more people,” Germany’s chancellor Angela Merkel said. “I think we need the creativity and innovation of the companies, and for that we need patent protection.”

France’s president Emmanuel Macron said: “There isn’t one factory in the world that can’t produce doses for poor countries because of intellectual property,” according to the Politico news site, while the Dutch prime minister Mark Rutte warned that “there could be a paradox, that by granting intellectual property waivers, you could have issues around ramping up production”.

Italy’s prime minister, Mario Draghi, said: “Before getting to the liberalisation of vaccines, other simpler things should be done, such as removing the export block that today the US firstly, and the UK, continue to maintain.”

Pressure on the UK

“Defending intellectual property at all costs will not only lead to even more unnecessary loss of lives but is an unprecedented act of collective self-harm,” said signatories including Andrew Hayward, director of the University College London Institute of Epidemiology and Health Care, and Clare Wenham, associate professor of global health policy at the London School of Economics and Political Science.

By contrast, industry representatives have warned that waiving intellectual property could discourage the innovation that will be needed to combat future diseases.