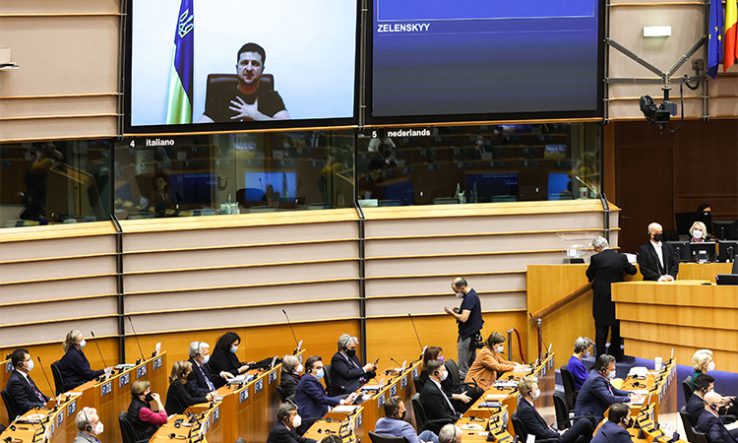 The European Commission has said it is stopping the agreement of any new collaboration with Russian organisations through EU programmes, is blocking EU payments to Russian entities and will review all existing research projects involving Russia, following the country’s invasion of Ukraine.

On 2 March a spokesperson told Research Professional News: “The Commission services will not conclude any new contracts and agreements with Russian organisations under existing EU programmes.”

In relation to the current and previous EU R&D programmes, they added: “We will review all ongoing projects (both under Horizon Europe and Horizon 2020). In the meantime, no payments will happen to Russian entities.”

The spokesperson was responding to a request for comment on a call from the European Parliament for the EU to cut its research and innovation relations with Russia.

‘Greatest level of flexibility’ for Ukraine

In addition, Gabriel said the Commission was “determined to supporting Ukrainian students, young people, teachers and educators in these extremely challenging times”.

She said she had asked for “the greatest level of flexibility” in the involvement of Ukrainians in the EU’s Erasmus+ mobility programme, including allowing beneficiaries to cancel, postpone or move activities. Ukrainian students abroad “will be offered support adjusted to their needs and their safety would be guaranteed”, she said.

Gabriel also encouraged everyone to support Ukraine however they can.

Call to step up sanctions

In a resolution adopted on 1 March, the Parliament called for “funding for all research and innovation cooperation programmes with Russia supported with EU funds to be immediately blocked or withdrawn and for interregional programmes to be suspended”.

The resolution condemned “in the strongest possible terms the Russian Federation’s illegal, unprovoked and unjustified military aggression against and invasion of Ukraine”, which began on 24 February.

On the day the Parliament adopted the resolution, the United Nations High Commissioner for Human Rights said it had identified 136 civilians as having been killed in the military action, including 13 children, and added: “These are only the casualties we were able to cross-check, and the real toll is likely to be much higher.”

MEPs adopted the resolution by 637 votes to 13. They said Russia’s actions “constitute a serious violation of international law”, and that there was a need to adopt “additional severe sanctions” on top of those already implemented against Russia by the EU.

In addition to the action on research and innovation, the resolution called for a ban on new EU investment in Russia and vice-versa, as well as a ban on the export of “high-tech products and strategic goods” to Russia.

Scrutiny of global research ties with Russia had been ratcheting up since the invasion began, and other European research organisations had already begun cutting their ties to Russia.

In the Parliament session, MEPs and other EU leaders listened to a live speech via video from Ukraine’s president Volodymyr Zelensky (pictured), who received a standing ovation.

He told the gathered EU politicians that he was speaking to them “between the missile strikes”, adding that on that morning two missiles had hit Kharkiv, a city that he said had “more than 20 universities…the largest number of universities in our country”.

The following day, media reported footage of what they said were university buildings in Kharkiv that were on fire following missile strikes.

Research organisations across Europe have expressed solidarity with Ukraine and condemned the invasion.

Among the most recent messages of support for Ukraine, the InspirEurope initiative to support researchers at risk called on governments and the EU to “protect the future of Ukraine’s higher education, by keeping Ukraine’s scholars and students active in research and education during a period of enforced exile”.

“In the past days, we have begun to receive appeals from researchers, scholars, and students in Ukraine, all seeking pathways to safety,” the initiative said.

“Our organisations will work with higher education institutions in Europe and around the world to arrange as many positions as we can for scholars from Ukraine, and for opponents of Russia’s invasion of Ukraine, to enable them to continue their important work in safety, until such time as a safe return is possible.”

The initiative reiterated its past calls on the EU to establish a dedicated fellowship scheme for researchers at risk, as well as national support programmes.

Update 2/3 – This article was updated with comments from Gabriel.