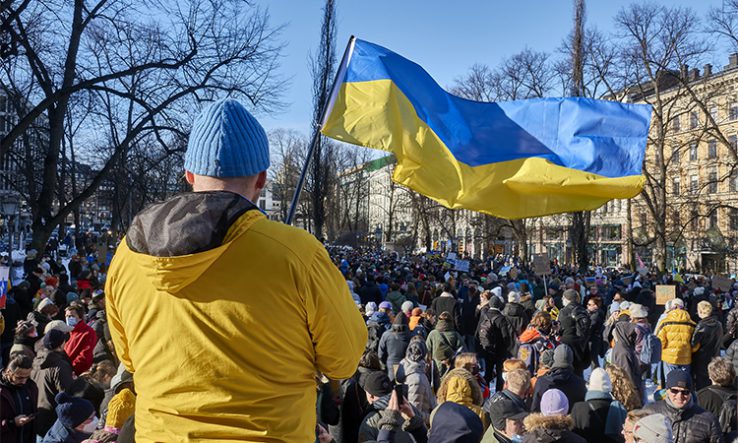 Their moves came after campaigns in support of Ukraine filled European streets (pictured), and as Russia stepped up its military activities in the country by firing on residential areas, killing and wounding many civilians, including children.

After a call from leading MEP Christian Ehler for the EU to cut all of its research ties to Russia, a spokesperson for the European Commission told Research Professional news that all options were being considered.

“The Commission is currently taking steps to recalibrate its working relations with Russia and in this sense nothing is off the table,” they said on 28 February.

But other European research organisations are already taking action.

On the same day, the European Space Agency announced that it was “fully implementing sanctions imposed on Russia” by Esa’s 22 member states.

Esa said it was “assessing the consequences on each of our ongoing programmes conducted in cooperation with the Russian state space agency Roscosmos”, and that it would “align” its decisions with those of its member states.

As a result, the next phase of the ExoMars mission, a joint initiative with Roscosmos to study the red planet, is now “very unlikely” to go ahead in 2022 as planned, Esa said. A Mars rover and surface platform were due to be launched in September, but Esa said it would now “analyse all the options and prepare a formal decision on the way forward”.

Roscosmos had announced days earlier that it was withdrawing all of its activities and staff from Europe’s Guiana Space Centre in Kourou, French Guiana, following the adoption of EU sanctions against Russia for its invasion. Europe sometimes uses Russian launchers to deliver payloads into space from the site.

Esa said it would assess the impact of the Roscosmos withdrawal on its planned launches. The EU commissioner for space, Thierry Breton, said the Russian agency’s move would have “no consequences [for] the continuity and quality” of the EU’s Galileo navigation and Copernicus Earth-observation satellite services, adding: “Nor does this decision put the continued development of these infrastructures at risk.”

Other moves to cut ties

Also on 28 February, the Austrian Science Fund, FWF, announced: “In response to the belligerent actions of the Russian Federation, the FWF will, for the time being, refrain from authorising new funding for research projects with Russian participation and suspend bilateral cooperation with the Russian Science Foundation.”

In contrast to its cutting of ties with Russia, the FWF said it “will do everything in its power to help researchers maintain their cooperation with Ukrainian colleagues”. It announced it was speeding up extensions for projects involving Ukrainian researchers as well as its evaluation of proposals involving researchers affected by the invasion.

Elsewhere, 11 European experts affiliated with the EU’s Quantum Flagship research and innovation programme wrote an open letter to their colleagues in the Russian Quantum Center, announcing that they were withdrawing from its International Advisory Board because of the invasion.

“We do not want our advice and expertise to benefit directly or indirectly any government that is waging war,” the experts said. “We strongly hope that in the future the situation will be resolved so that we will be able to work with you again.”

Many major German research organisations had already announced that they too would cut their ties to Russia.

The moves by European research organisations came as Science Europe, the association of major European research funders and performers, published excerpts of comments provided to it by Olga Polotska, executive director of the National Research Fund of Ukraine.

She described the situation in the country as “hell”, adding: “There is a full-scale war going on, with missiles, heavy weapons, bombings, and warning sirens going off continuously. It is truly frightening. Every night is a nightmare.”

According to Polotska, the National Research Fund of Ukraine does “not know what will happen” regarding the situation of its grant-holders.

She said: “The research community is shocked, and many researchers are attempting to reach international colleagues to move away. Women can freely leave the country, but men under 60 are not allowed to leave. The situation is highly challenging for experiments that cannot stop at the risk of losing months, or years, of work.”