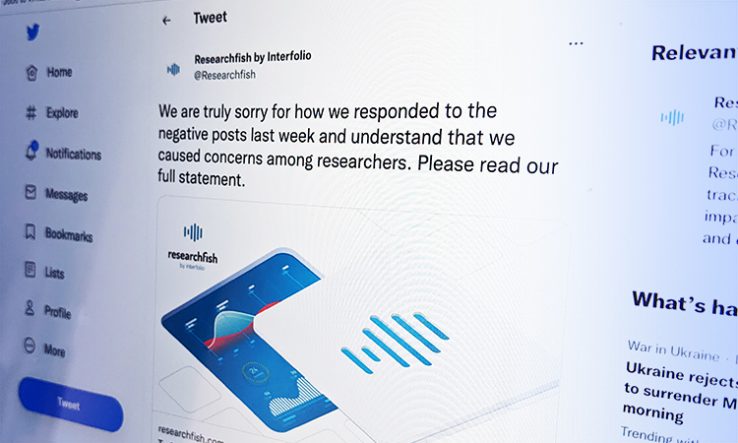 The academic impact-tracking service Researchfish has said it is “truly sorry” after it told academics it had reported them to their funders for criticising the system on Twitter—but many researchers are asking questions about how the service used their data.

The apology comes after researchers rallied against Researchfish on Twitter, with hundreds of critical tweets posted since Friday. Some have called for the service’s communications with UK funders to be examined further and even for UK funders to stop using the service.

Researchfish was accused of intimidation and bullying last week after it took issue with tweets aimed at the service, which uses technology to track research and evidence impact. The service is used by many funders to track grant outcomes and researchers have to upload their own data about their funding.

Responding to a handful of critical comments by academics, Researchfish’s Twitter account posted messages saying: “We understand that you’re not keen on reporting on your funding through Researchfish but this seems quite harsh and inappropriate. We have shared our concerns with your funder.”

Since then, Twitter users have claimed that Researchfish has a history of reporting people to funders for their tweets, with some academics deleting critical tweets as a result—and one even saying he had been summoned to a meeting by his university HR department as a result.

Following an uproar on Twitter, Researchfish first issued an apology on Friday but this too was criticised as wholly inadequate.. The tweet attracted over 400 mostly critical replies.

“We apologise for our poor word choice and we take seriously your comments,” Researchfish said. “Please know we support your success and advancing investments in your research. However we adopt a zero tolerance policy towards abuse aimed at our company and staff, we will revisit policies and procedures.”

This was followed by a statement on 20 March, in which Researchfish said it was “truly sorry” for how it responded to the negative posts and “understand that we caused concerns among researchers”.

“We take full responsibility for how we responded and we are actively taking steps to revise procedures and improve communication with those across the research community.”

Researchfish added that it was “dedicated to researcher success and the advancements they make to further society”.

“On behalf of the entire team, we remain committed to supporting the productive and impactful work of researchers. We will learn from our mistakes and be better. Again, we sincerely apologise.”

But for some academics the apology came too little, too late.

“There are other issues,” wrote Vanessa Diaz, a professor of healthcare engineering and vice-dean for equality, diversity and inclusion at University College London’s engineering faculty. She questioned Researchfish’s use of researcher data and its compliance with GDPR rules.

“There is no trust in your system or the processes and procedures you have in place to safeguard our data,” she said.

Fiona de Londras, a professor at Birmingham Law School, added: “It is not isolated to last week and we now know [Researchfish] has ‘reported’ people to their institutions/funders following critical tweets. Did [Researchfish] use data entered for reporting for these purposes? If so, have you reported yourselves to relevant data protection authorities?”

Meanwhile, some researchers have called for Researchfish’s communications with funders to be examined further.

A number of funders, including UK Research and Innovation (UKRI), the National Institute for Health Research and the Wellcome Trust require the researchers they fund to report their research outputs to Researchfish.

Michael Veale, an associate professor in digital rights and regulation at UCL, submitted a freedom of information request to UKRI asking for their correspondence with Researchfish from the last five years relating to the service reporting on the behaviour of researchers based on their social media statements.

He also asked the funder to “provide any documents or databases that UKRI maintain on the public criticism of Researchfish by researchers on social media, and if they exist, policies regarding their maintenance and use”.

And Jonathan Davies, a researcher at De Monfort University, tweeted that he had written to UKRI “asking them to censor this corp, break links with it and publicly assure its researchers that threats will have no impact on future grants decisions or evaluations”.

A Twitter poll by Research Professional News found that 95 per cent of 358 people who responded thought UK funders should no longer use Researchfish following the revelations.

UKRI, Researchfish, NIHR and Wellcome have all been approached for comment.

A UKRI spokesperson told Research Professional News last week: “We are aware of the concern that has been raised regarding tweets posted by Researchfish. We understand and acknowledge the serious issues raised by researchers and we will be discussing these with Researchfish as a matter of urgency.”