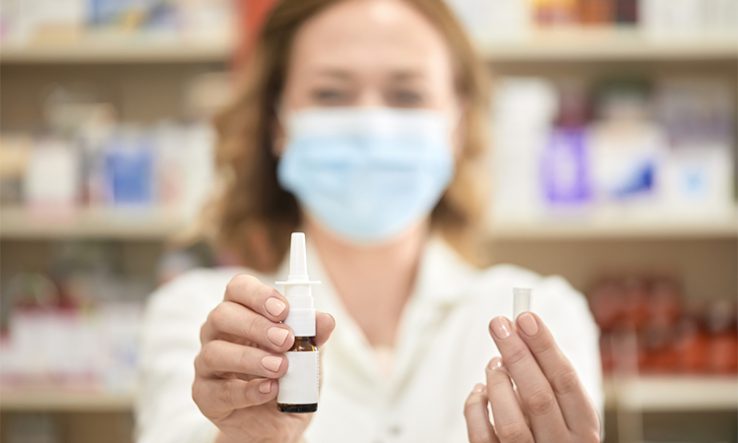 Spray “shows great promise”, with plans to bring it to “as many people as possible”

UK scientists have tested a nose spray that prevents Covid-19, raising hopes for an easier fight against future waves of the potentially deadly disease.

Their paper, published this week, reports a 62 per cent efficacy for the spray, which they say contains natural virus-killing ingredients.

One of the study’s authors, Angela Russell from the University of Oxford, said that this “is the first prophylactic spray that we know of which is clinically proven to prevent infection”, adding that prevention “is key” to reducing future waves of Covid.

“There is mounting awareness in healthcare systems that prophylaxis is an important part of pandemic response,” she added.

“This prophylactic spray has two actions: it stops the virus from entering the body via the nasal epithelial cells and protects the cell from viral ingress.”

The spray is made with a “combination of natural virucides” and was developed by biotechnology firm Raphael Labs, which is led by a team including Oxford University chemistry professor Steve Davies.

A clinical trial in India has shown that the nasal spray can help prevent coronavirus infection, rather than just severe disease, as most currently available Covid-19 vaccines do.

The double blind, placebo-controlled, randomised trial on 650 unvaccinated healthcare workers in India showed that the spray reduced infection of Sars-CoV-2, the virus which causes Covid-19, by 62 per cent compared with a placebo.

The firm’s paper on the trial of the spray, called pHoxwell, was published in the peer-reviewed Journal of Clinical Virology on 25 July.

The study “shows great promise”, according to global health researcher at the University of Southampton, Michael Head, who was not involved in the study.

Unlike vaccines, which reduce the severity of Covid-19 symptoms, nasal sprays have the potential to prevent infection with the virus, Head explained.

“Preventing infection, as opposed to reducing the severity of symptomatic disease, will be required as part of a long-term approach to controlling Covid-19,” he told Research Professional News.

But Head warned that the new study would require bigger trials to establish how good the spray really is.

Another author of the study and chairman of Raphael Labs, Rakesh Uppal, who is affiliated with Queen Mary University of London, Barts Heart Centre and the London School of Medicine, said coronavirus infection was still “causing a huge burden on global health and a significant strain on the world economy”.

Uppal added that there was an “increasing understanding” that preventative measures against the virus needed to be looked at.

The trial was conducted during the peak surge of the infectious Delta variant in India from April to July 2021. Raphael Labs collaborated with scientists in the UK, India and the United States to develop the spray. It is now hoping to bring it to market in the UK and elsewhere.

A spokesperson for the firm told Research Professional News: “We are in constant dialogue with the Medicines and Healthcare products Regulatory Agency to bring pHoxwell to the UK through a novel-medicine pathway. We continue our discussions with other regulatory bodies across the world to bring pHoxwell to as many people as possible.

“You’ll be aware that Sars-CoV-2 rates have gone up in the UK and around the world with the evolution of new Omicron subvariants. A pressing need to prevent infections and the associated morbidity and mortality remains.”