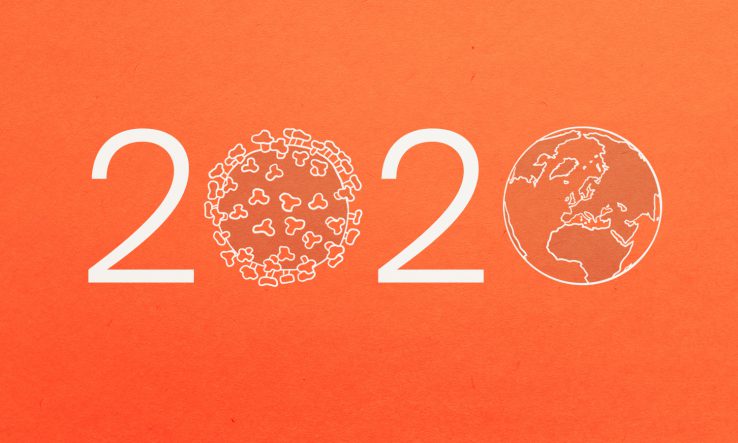 From the push for a Covid-19 vaccine, to A-level chaos and the quest for UK Arpa, here is a rundown of the UK R&D and higher education stories that dominated 2020.

Vaccines and tests
The prime minister’s comments in early March that the UK was “well prepared” for the coronavirus—and that it had an “amazing surveillance of the spread of disease”—came back to haunt him. The country struggled to build up testing capacity and deploy it in a test, trace and isolate programme that would reach the required number of people to stem the epidemic.

The lack of UK-based capacity to manufacture vaccines also soon came into sharp focus. Billions have been ploughed into efforts to build up test and vaccine capabilities. By the end of the year, researchers had made huge progress on both, although there is still a question mark over the effectiveness of the test and trace system. But chief scientist Patrick Vallance and chief medic Chris Whitty have underscored the importance of maintaining the newly found capacity to ward off future epidemics. “One of the big learnings I would have from [Covid-19 and from Ebola before it] is we really, really got to build our capacity to do testing…at scale,” said Whitty recently. “We’ve been caught out twice now with lack of testing, and I think three times would be too many.”

Science advice
The role and mechanisms of scientific advice to government came under the spotlight like never before, as ministers claimed to be ‘following the science’ on key decisions on tackling the Covid-19 pandemic, even as the UK struggled to contain the virus and suffered tens of thousands of deaths. The Scientific Advisory Group for Emergencies struggled with the need to build up capacity and resilience in light of a long, ongoing crisis.

Co-chair Patrick Vallance admitted Sage was too secretive about its inner workings and the advice given in the early weeks of the pandemic. Such secrecy prompted the launch of a rival group, Independent Sage, that aimed to inform the public and hold government to account on science policy decisions, with plans to continue even beyond the pandemic, to discuss matters such as climate-change targets. A close investigation of science and how it feeds into policymaking machinery will likely be a key feature of a promised inquiry into the UK’s response to Covid-19.

Changes at the top
The ministerial merry-go-round continued this year, with Derby North MP Amanda Solloway replacing Chris Skidmore as science minister in February. Meanwhile, Chippenham MP Michelle Donelan took over the universities part of Skidmore’s old job. There were also major changes at UKRI: Ottoline Leyser, previously director of the Sainsbury Laboratory at the University of Cambridge, replaced Mark Walport as chief executive, and John Kingman announced he would be stepping down as chair in 2021.

Meanwhile, Ian Campbell announced he would be leaving his interim executive chair role at Innovate UK; his replacement has yet to be announced. Elsewhere, Alan Turing Institute director Adrian Smith took over from Venki Ramakrishnan as president of the Royal Society.

Picture of the year 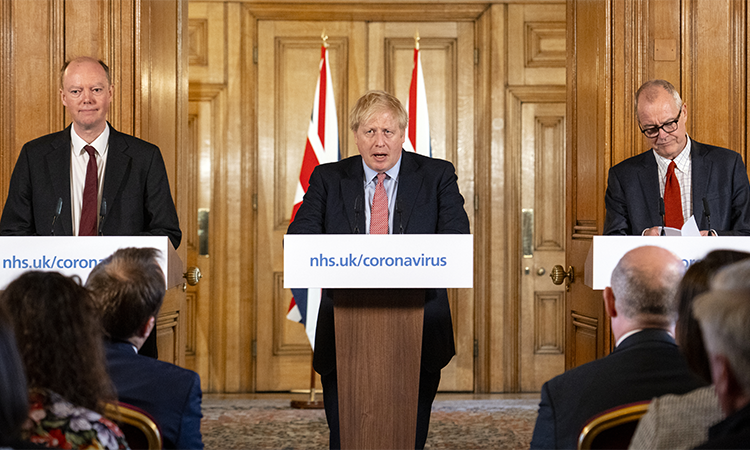 Black Lives Matter
The killing of George Floyd in the US in May and subsequent Black Lives Matter protests internationally triggered introspection within the R&D sector. In June, Research Fortnight exposed a 2017 internal report from the University of Oxford that found an “unexplained” bias against Black, Asian and minority ethnic applicants in its undergraduate admissions process, some of which the university said it has since addressed.

And in July, members of the research community took aim at the Institute of Physics for a “complete failure to engage with criticism” over its diversity record following the institute’s appointment of six new honorary fellows, among whom “white men named Brian” outnumbered women and members of the BAME community combined. In August, the government research funder, UK Research and Innovation, also faced heavy criticism after none of the principal investigators receiving its recent grants on Covid-19 and ethnicity were Black. Many key institutions in the sector have since pledged to examine their policies, and fixing the research culture has been one of the key themes in science minister Amanda Solloway’s work this year.

Research careers
The Covid-19 pandemic disrupted the work of researchers and students across the country. According to a Vitae survey of 8,400 researchers, some 68 per cent of early career and 44 per cent of part-time researchers said they worried about their contracts not being extended due to Covid-19. Overall, 45 per cent of respondents anticipated a decrease in research funding over the next year. Academic jobs have also been in short supply.

As the new academic year began in the UK, the number of jobs listed on the jobs.ac.uk website was about half the figure in 2019. Meanwhile, UKRI faced a backlash from students and researchers after it “strongly” advised most students it funds to adjust their projects to enable them to complete their research on time, despite delays caused by the pandemic. Campaigners said more flexibility on dates was needed, in addition to more financial support beyond the £62 million in funded extensions UKRI that has provided.

Quote of the year 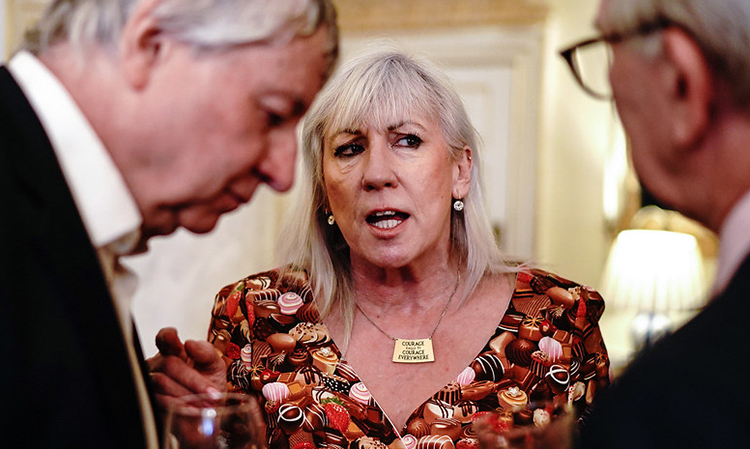 “We must do everything we can to eradicate bullying and harassment, getting rid of bad behaviour and its root causes, and to promote wellbeing at all levels.”

Postgraduate application fees
A nationwide campaign to scrap application fees for postgraduate students at UK universities gained momentum this year— with one university dropping the fees even as others introduced them. In February, Research Fortnight revealed a campaign by staff at the University of Oxford to phase out the institution’s £75 fee, amid concerns that it was restricting access to the elite university. Oxford and Cambridge take millions in application fees from unsuccessful applicants each year.

Oxford staff initially opposed calls to scrap the fee in March, but the decisions was overturned in September following a wider, postal vote. But even as campaigners and students celebrated in Oxford, decision to introduce application fees at the University of Southampton and Imperial College London sparked outrage from students and staff alike.

A-level chaos
August saw universities and students leading the headlines as A-level results day descended into chaos. Scotland became the first UK nation to abandon its calculated grades, which were created using an algorithm that turned out to be more likely to downgrade the Highers results of students from schools with a history of poor performance. Pressure grew on education secretary Gavin Williamson to follow suit in England before results were published on 13 August, but it took him until 17 August to finally allow students to take their teacher-assessed results instead.

The U-turn left university admissions offices working around the clock to place students with new grades. The fiasco was later cited in the UK’s professional body for IT’s call to ensure that algorithms deployed for public policy met strict ethical and professional standards in future, in a bid to recover public trust.

Return to campus
Students’ return to campus in September led to a spike in Covid-19 cases, so much so that the National Audit Office recently blamed the return to university for a run on Covid-19 tests in the autumn. As cases of the virus multiplied among students, universities took drastic action. Some students were told to stay isolated in their halls, while one hall at the University of Manchester was fenced in—the university says for security. Thousands of self-isolating students were allowed to mix in a super bubble at Manchester Metropolitan University.

Eager to avoid a repeat of the virus-heavy start to the term, the government set up a lateral flow testing programme to catch Covid-19 cases before allowing students to return home for Christmas between 3 and 9 December. Early results indicate that the programme has caught few cases. Out of about 4,500 students, the University of Portsmouth found 0.2 per cent of tests came back positive. The mass-testing programme will run again next year, as students return to campuses in January and February.

UK Arpa
The government’s pledge to create a new agency based on the US Defense Advanced Research Projects Agency was given legs this year with £800 million over five years confirmed at the spring budget, £50m of which was earmarked for the first year at the autumn spending review. However, there is still no sign of the agency, despite Boris Johnson announcing that it would be “created” this summer. It is also unclear how the agency will fit into the existing research landscape, with former science minister Jo Johnson arguing in favour of the agency finding a home within UKRI.

Meanwhile, Innovate UK’s former interim executive chair, Ian Campbell, said the funder should be built and integrated “into a reinvigorated Innovate UK” rather than “implicitly jettisoning” existing funders. As for its physical location, several cities and universities have put their hats in the ring to host the agency, including Queen’s University Belfast and Cardiff University. With the agency’s key supporter, Dominic Cummings, leaving his Downing Street post at the end of this year, questions remain about how plans for the agency may change.

Aid cuts
The future of two key funds for international development research—the £735 million Newton Fund and the £1.5 billion Global Challenges Research Fund—has become increasingly uncertain. The economic hit of Covid-19 was putting pressure on aid-spending that finances the funds even before the government slashed overseas aid from 0.7 to 0.5 per cent of GNI in November’s spending review. In June, MPs released a damning report on the Newton Fund, saying it should only be financed after being redesigned around development impact. Also in June, the absorption of the former Department for International Development into the Foreign, Commonwealth and Development Office signalled a shift in government direction.

While foreign secretary Dominic Raab has said science is a priority area for future aid spending, both the Newton Fund and GCRF are only financed until 2021. Raab is conducting a review of aid spending, due in early 2021, leaving researchers guessing about what to expect. A UKRI official has said it was “inevitable” there would be less money for research, but there is support from both UKRI and university leaders to maintain aid-funded research.

Research funding
The year kicked off with promises of the largest ever rise in R&D funding, which was soon put to the test as billions in unplanned money were spent on responding to Covid-19, and the economy took a major hit from lockdowns and epidemiological restrictions. Universities in particular expected to see a big hole of an estimated £2.6 billion in their budgets, largely because they expected fewer international students to enrol and pay their fees given the ongoing pandemic.

Vice-chancellors group Universities UK asked for a 100 per cent increase in the roughly £2 billion quality-related funding expected for 2020-21, but only got about 5 per cent of that in the first support package in May, with government pulling forward £100 million of QR research funding and advancing £2.6bn of tuition fee payments to institutions.

The second support package, in November, was designed to offset up to 80 per cent of the losses from international student fees—which normally cross-subsidise research—but this was controversially tied to pay restraint and reporting of salaries at senior levels. Meanwhile, medical research charities campaigned unsuccessfully for a dedicated fund to address the £310m a year funding hole they found themselves in because of Covid-19 impacts.