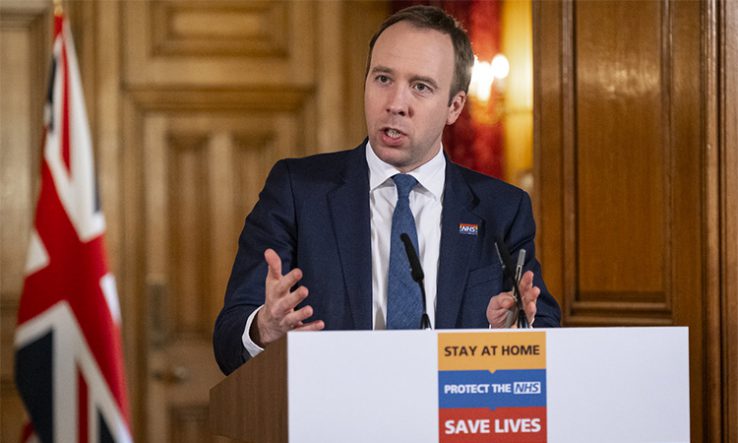 Plan will be delivered with the help of universities, industry and the NHS, minister says

The health secretary has set out plans to increase coronavirus tests to 100,000 a day in England by the end of the month—with the help of universities, industry and the NHS.

Speaking at the government’s daily coronavirus briefing on 2 April, Matt Hancock announced a five-pillar plan to scale up testing.

Firstly, the government plans to scale-up swab testing in Public Health England labs and NHS hospitals “for those with a medical need and the most critical workers to 25,000 a day by mid to late April”.

The second pillar aims to deliver increased commercial swab testing for critical key workers in the NHS before expanding this to key workers in other sectors.

“The biggest part of pillar two is partnerships with universities, research institutes and companies like Amazon and Boots to build from scratch a network of new labs and testing sites across the country,” Hancock said.

The government also plans to introduce antibody blood tests to determine whether people have had the virus, as well as surveillance to determine the rate of infection and how it is spreading across the country.

Finally, it plans to create a “national effort” for testing, “to build a mass-testing capacity at a completely new scale”.

John Newton, the director of health improvement for Public Health England, has been appointed to help deliver the plans by bringing together industry, universities, NHS and the government.

The announcement comes amid widespread concern over the availability of testing across the NHS, with many healthcare workers self-isolating with suspected symptoms or because family members are ill.

The Prime Minister has previously announced plans to get to 250,000 tests a day, a longer-term target that Hancock said the government is still aiming to hit.

Hancock also said the government has bought 17.5 million tests, “subject to them working”, but added that “early results of some of them have not performed well”.

The Foundation For Innovative New Diagnostics (FIND) is collating a pipeline of diagnostic tests, with around 214 listed worldwide, some 15 of those by companies and labs with bases in the UK.

The UK efforts include the following: