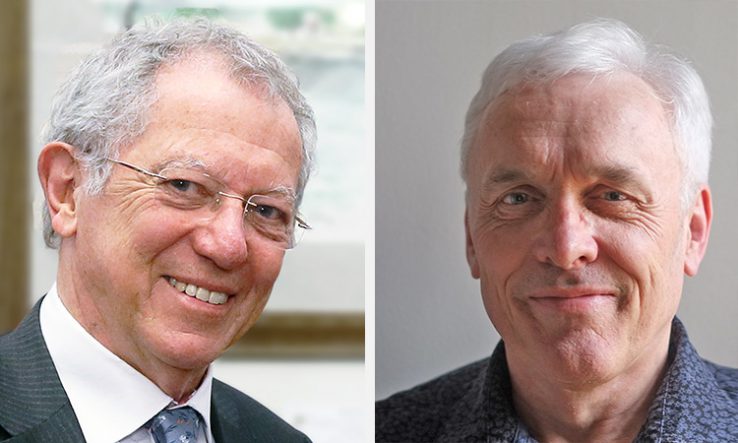 An “independent” Scientific Advisory Group for Emergencies has urged the government to rethink its “dangerous” Covid-19 recovery strategy.

The news comes as one of the group’s members, Anthony Costello (pictured, right), director of the Institute for Global Health at University College London, said the government’s plan was apparently “not approved by the chief scientific adviser and chief medical officer”.

Prime minister Boris Johnson unveiled a five-tier alert system on 10 May, determined by the reproduction rate of the disease and the number of coronavirus cases, with new measures to ease the current lockdown. A spokesperson for the Government Office for Science said: “Sage advice fed into the new strategy as it has throughout the Covid-19 response.”

But a damning report published by a group of academics headed by former chief scientific adviser David King (pictured, left) on 12 May warns that the strategy will lead to the “rapid return of localised epidemics, resulting in more deaths and potentially further partial or national lockdowns, with the economic costs that will incur”.

“We detect ambivalence in the government’s strategic response, with some advisers promoting the idea of simply ‘flattening the curve’ or ensuring the NHS is not overwhelmed,” the report said. “We find this attitude counter-productive and potentially dangerous.”

Instead, the 13-strong group urges the government to refocus its ambition on ensuring “sufficient public health and health system capacities to ensure that we can identify, isolate, test and treat all cases, and to trace and quarantine contacts”.

They also call on the government to adopt “real-time” models as opposed to epidemiological ones based on post-hoc data.

“With real-time modelling put in place, it may be easier to forecast what will happen when we move from this level of social distancing to another—and share this with the public in a clear, quantitative and explainable fashion,” they said.

Furthermore, the scientists criticised the “inaccurate, incomplete and selective data” presented by government officials and called for the Office for Statistics Regulation to publish further assessments of the statistics presented to date.

“Since the start of the Covid-19 epidemic, the government has told us they are following the science, however, in the weeks and months that have followed, it has become increasingly apparent that this is simply not the case,” said King.

“It is vital that the best possible science advice is not only being received by the government, but also by the public.”

The group’s recommendations will be sent to the government’s chief scientific adviser, Patrick Vallance, as well as the chair of the Health Select Committee, Jeremy Hunt, Number 10 Downing Street, and the first ministers of Wales, Scotland and Northern Ireland.

Research Professional News has contacted the government for comment.