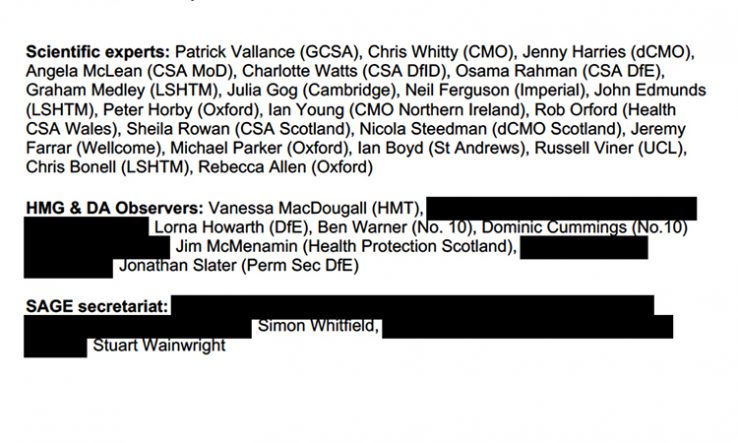 A push for more openness from the Scientific Advisory Group for Emergencies has resulted in the identification of nearly all of its researcher members, but the names of many government advisers present at its meetings remain shrouded in secrecy.

The disclosure of Sage’s membership has become a point of contention during the coronavirus pandemic, especially since it emerged that the prime minister’s adviser Dominic Cummings was sitting in on some meetings.

After pressure for more transparency, the government’s chief scientist Patrick Vallance said on 27 April that he would be happy to make public the details of those members willing to be named. Many, but not all, have since been made public.

On 29 May the minutes for 34 meetings up to the start of May were published by the government.

Heralding the publication, Vallance said: “Openness and transparency around this disease is a social imperative, which is why it’s important we don’t wait to publish minutes and evidence.”

But while almost all scientific experts attending recent meeting of Sage are revealed, the names of many government advisers have been redacted.

In the most recent set of minutes from 7 May, one name from 31 experts is redacted. The names of four of seven “observers and government officials” were also redacted for the same meeting.

The minutes of the previous meeting on 5 May list the names of all 31 attending experts, and redacts three of seven observers and officials.

For a 1 May meeting, one of 19 experts is redacted along with four of six observers and officials. One of the listed observers and officials is Cummings. Another Sage meeting on the same date has no redacted experts in the minutes, and apparently three or four redacted “HMG & DA Observers” [Her Majesty’s Government and Devolved Administration]. Cummings is listed here too.

Names from the Sage secretariat are also redacted in the minutes.