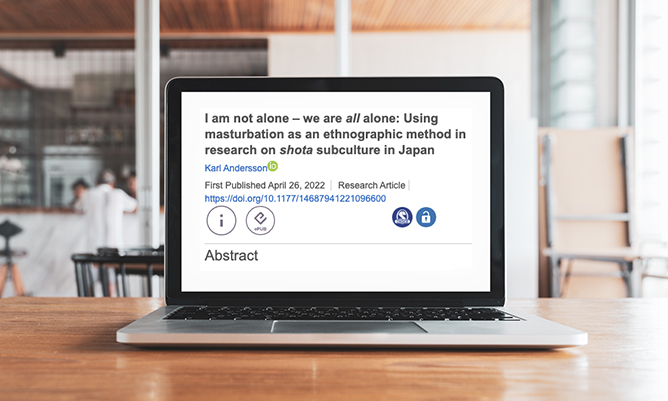 Shota refers to a genre of manga and anime where prepubescent or pubescent male characters are depicted in a sexually explicit way. Several academics and public figures have strongly criticised the study and the procedures that allowed it to be conducted and published in a peer-reviewed journal.

‘How was this written, reviewed or published?’

“He describes his arousal to sexual scenes featuring ‘very young boys’. How was this written, reviewed or published?”

Emma Kenny, a TV presenter, psychologist and broadcaster, said the publication amounted to “the normalising of child sexual abuse”.

The study’s author, Karl Andersson, currently a PhD student at the School of Arts, Languages and Cultures at the University of Manchester, wrote in the paper that he “wanted to understand how my research participants experience sexual pleasure when reading shota”.

His paper starts by saying: “I had hit a wall in my research. Semi-structured interviews can only take you so far, especially when the topic is sensitive, which mine is.”

It is unclear if the study was conducted while Andersson was a student at the University of Manchester, though the study lists him as being affiliated to the university.

According to Andersson’s Twitter profile, he is funded by the University of Manchester, though the paper says he “received no financial support for the research, authorship, and/or publication of this article”.

“The non-Stem side of higher education is just much too big, producing too much that is not socially useful.”

When asked about the study, a spokesperson for the University of Manchester confirmed the publication was the work of a student who is now registered for a PhD at the university.

They added that the publication had “raised significant concerns and complaints, which we are taking very seriously”.

“We are currently undertaking a detailed investigation into all aspects of their work, the processes around it and other questions raised. It is very important that we look at the issues in-depth. While that investigation is ongoing, it would not be appropriate for us to comment further at this time.”

A spokesperson from Sage Publishing said it was also investigating the publication of the paper.

“We will consider closely all guidance from the Committee of Publication Ethics and ensure that any actions taken comply with Cope standards,” they said.

In the paper, Andersson thanked Elisabeth Lund Engebretsen, who is a professor of gender studies affiliated to University of Stavanger, in Norway, “for commenting on an early version of this article” and his PhD supervisor Sharon Kinsella, lecturer in Japanese studies at Manchester, “for always encouraging me to go where my research takes me”.

Research Professional News has approached both Lund Engebretsen and Kinsella for comment.

Social psychologist and research consultant Petra Boynton said: “It isn’t clear whether ethical approval was sought in this case, which raises its own concern.”

She added that ethics committees, supervisors and journals need to be alert to situations where there is potential to cause harm.

Boynton said she believed there had been “a systemic failure here, in an extreme case, but our focus should be on ethics, dignity and safety through all research and teaching to reduce the chance of exploitative research like this being repeated”.