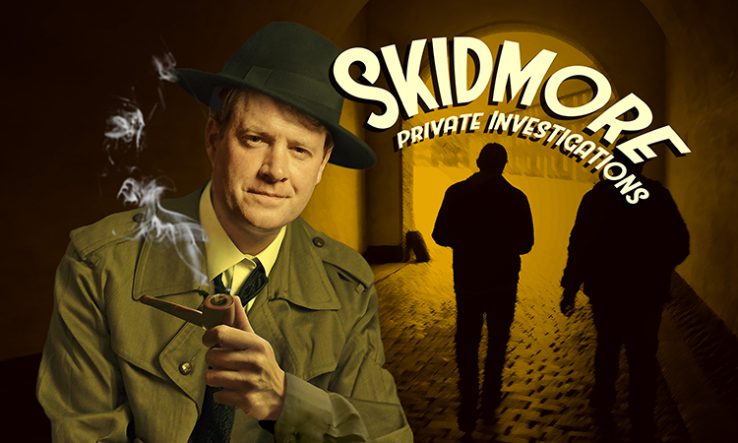 The latest edition of our Ivory Tower comedy column

He walks the streets of Westminster, a hardboiled universities minister, a cross between Philip Marlowe and Christopher Marlowe. He is Skidmore, private investigator.

Titles: Rain falls on Westminster Bridge, as Herbie Hancock’s Cantaloupe Island plays. The camera pans to the Department for Education, where inside, behind a smoked glass door, Skidmore PI is sitting with his feet on the desk.

Voiceover: It was a normal day in downtown Westminster, the place where dreams come to die. The rain outside was washing the scum off the streets as all the lobby journalists took shelter in the Red Lion pub. I hadn’t had a case in weeks, the rent was due, and I was down to the last of the Aldi own-brand whisky, when there was a knock on my door.

Skidmore: Inspector Williamson, to what do I owe the pleasure?

Williamson: Don’t play the innocent with me, Skidmore. The boys down the Cabinet Office have a bet on that you’ll try to deny all knowledge of it.

Skidmore: I don’t know what you mean, Inspector, I’m just a humble gumshoe with a side interest in medieval history to give my character an eccentric twist.

Williamson: I’ll give you 24 hours, Skidmore, then I want it on my desk, and we’ll say no more about it, capiche?

Skidmore: I thought you were from Scarborough, Inspector—that’s an odd word for a Yorkshireman.

Williamson: New Yorkshire, buddy. I’m from the meanest borough, and if you don’t hand it over by this time tomorrow, you’ll have to answer to big Dom.

Williamson: I’m talking about the government response to the Augar review, which is due out before Christmas. Now that there is going to be an election, it needs to come out before parliament is dissolved. You might look like a prep-school house captain who’s had too much Sunny Delight, but I know you know where it is. Get it done, Skidmore.

Voiceover: I was in the frame for some cockamamie scheme. I was being stitched up by someone who wanted my name on a suicide note. I needed info, so I headed down to Westminster tube where the best source in town worked his newspaper stand.

Skidmore: The Telegraph and a copy of True Detective, Two Brains.

Two Brains: Your usual order, I’ve got it here. It’s been waiting on you, where have you been?

Skidmore: I’ve got a lot to think about, Two Brains. I need some information.

Two Brains: I’m just an old peer of the realm now, I don’t do that sort of thing anymore. I know nothing, Mr Skidmore.

Skidmore: Come on Two Brains, everyone knows you are the go-to guy. Tell me about the government’s response to the Augar report.

Two Brains: It will cost you.

Skidmore: I’m down to my last twenty, I can pay you next week.

Two Brains: No, it will cost around £1.5 billion to make good on what big Phil Augar is demanding, and that’s before the impact on research productivity.

Two Brains: Word on the street is that the big bad Wolf is crunching the numbers for Boris. Hunt down the Wolf and you’ll find your answer.

Voiceover: The big bad Wolf. That was a name I hadn’t heard for a very long time, like some long-forgotten nursery story. I knew Rachel Wolf when we used to work over in the Gove squad. There were three of us: me, Rachel and mad Dom Cummings. Rachel broke my heart when she went to work for Boris. They all do in the end, even Dom. Maybe old man Gove knew where she was these days.

Gove lived in a rundown old gin palace called the Duchy of Lancaster, where he spent his time cutting articles out of newspapers and sticking them into his Brexit scrapbook. People said he was crazy, but old man Gove and me went back a long way, way back before anyone had ever heard of Nick Clegg or Facebook.

Gove: My dear boy, come in. How is your biography of Henry coming along?

Skidmore: I don’t do that sort of thing anymore, Mickey.

Gove: Of course, I forgot. Not since the incident.

Skidmore: I need to find her again, Mickey.

Gove: You’re a fool to go after her. Haven’t you learned your lesson? They all work for Boris now. I tried to stop him once and look what happened to me. Just a washed-up Brexit junkie with only my Daily Mail scrapbook for company.

Gove: She is running with a gang called Public First these days. You’ll find her on Tufton Street with the rest of the rent-a-mouths. Just keep my name out of it.

Voiceover: Tufton Street, the revolving door to the rottenest borough in this rotten town. No one in Tufton Street was thinking of the truth, just ways to fit the evidence to the policy.

Rachel Wolf hung out on the top floor of number eleven. Rumour was that she was preparing something big for Boris the boss. My only chance of getting Williamson off my back was to get to the Wolf before she shot her silver bullet. I buzzed up, pretending to be an Uber Eats guy—they love the gig economy in Tufton Street.

Walking the streets of Westminster, between the Departments for Business and Education, can make you ready for anything, but not for having your heart broken all over again.

Wolf: And you, Goldilocks. It’s been too long.

Wolf: And look at you now, all grown up, and doing whatever it is you do. What big eyes you have.

Skidmore: All the better to see what’s going on behind my back.

Wolf: And what big hair you have.

Skidmore: All the better for…

Wolf: No seriously, it’s huge, like a seventies newsreader, get a haircut.

Skidmore: I’ll get a haircut when I get to the bottom of what you’re doing with the Augar report.

Wolf: Oh Goldie, you were doing so well. You haven’t even had your porridge.

Wolf: Augar sleeps with the fish and agriculture standards report, in a deep filing cabinet in old man Gove’s office.

Skidmore: Mickey? But he said…

Wolf: Oh Goldie, you’ve been running around this forest and not seeing the woods for the trees. Gove works for Boris now as well.

Wolf: Dom has been working for Boris all along. He sends his regards by the way, says you should take a slow rocket to a moon base, or something.

Skidmore: You are all in it together. You’ve killed off Augar and buried him in what’s left of this parliament.

Wolf: You always were the bright one, Goldie.

Skidmore: How could you, Rachel? Your own mother wrote that report.

Wolf: Ain’t no room for sentiment on Tufton Street, Goldie. Don’t look so shocked—I heard you were a no-deal Brexiter for five minutes last month. Everyone in this business has their price. Mother can be part of the next review of tertiary education, she’s been on the last two.

Skidmore: I thought you were a lion, Rachel, but it turns out you are just a Wolf.

Wolf: Dom was right about you, Goldie, a one-man race to continue in your job.

Voiceover: Augar was dead, and I was in the frame for it. I had to give Williamson something to throw him off the scent. His office was like a fireplace showroom on an August bank holiday.

Williamson: You are off the hook, Skidmore. We’ve got the guy responsible for this Augar business and he’s singing like a canary. Can’t shut him up.

Skidmore: But where did you find him?

Williamson: He had chosen a life of obscurity. Turns out he’s some kind of Liberal Democrat now. But lately he’s been all over the press, mouthing off about this and that. We’ll be writing it up and passing it off as our interim response, see if anyone notices when parliament is dissolved. He’s over there telling the desk sergeant about interest rates on student loans.

Skidmore: Maybe he could start at the beginning for me.

Terms of use: this is a free email for fun on a Friday. It should circulate widely like an application to the DCMS for a £100,000 technology grant. Want to hire Skidmore PI? Want to say hello? Email ivorytower@researchresearch.com