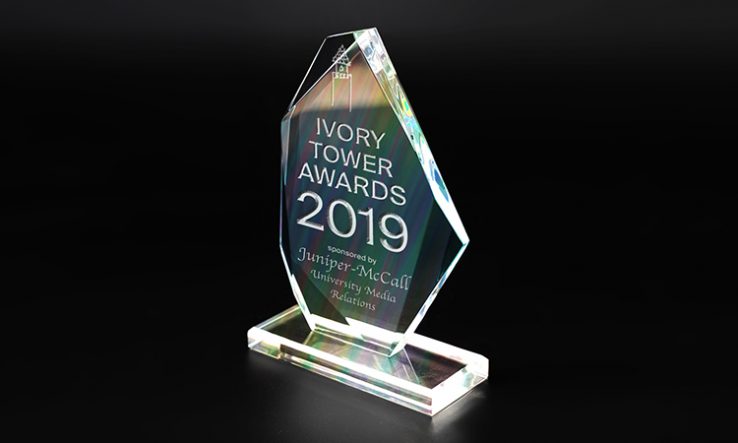 Ivory Tower: Time once again to honour all that is unbelievable about higher education

A large picket line of university staff striking over pay and conditions greeted guests at this year’s Ivory Tower Awards at the Pizza Express in Woking. To shouts of “dough-ball-munching fat cats”, the great and good from the world of universities and research took their seats to hear from the senior partners of this year’s sponsors, Juniper-McCall University Media Relations.

Alexander Juniper, head of gaslighting, told the audience that sad though he was to see industrial action spreading across so many universities, there had never been a better time to invest in brand awareness by taking out a long-term contract with industry-leading image consultants. Oliver McCall, head of deadcatting, said: “It is wonderful to see so many rubes willing to shell out for the privilege of entering an awards ceremony that statistically only one per cent of entries can win.”

Following the comic reflections of Mr Wally Wallop, star of Educating Solihull, guests enjoyed a three-course meal of green salad, a six-inch Margherita and a shortbread biscuit. Then the serious business of the evening began. We bring you the nominees and winners from this year’s awards.

Research Group of the Year, sponsored by UKR Isle of Man, the tax-efficient funding council

Special commendation:
Medical researchers at Queen Mary University of London, who sought constipated people for a study. “The team is appealing for volunteers to take part in a study on the causes and treatment of constipation… Anyone with chronic constipation can apply,” the press release stated, with the research taking place at the Centre for Neuroscience, Surgery and Trauma at Queen Mary’s Blizard Institute. “To take part in the trial, constipated adults aged 18-70 must be available for eight visits over six months.”

Winner:
There could only be one victor in 2019—the European Research Group, who do not like Europe, do not do any research and are not a group. Committed Brexiteers who voted repeatedly against the Withdrawal Bill, they are the primary reason Brexit has not yet happened.

Universities Minister of the Year 2018-19

Winner:
The judges wanted to recognise the achievement that since the last Ivories award ceremony England has had more universities ministers than an unsuccessful Italian football team has managers. Jo Johnson’s four-week stint in charge, before resigning from his own brother’s government and retiring from politics entirely, was particularly impressive. However, for his ongoing services to comedy in higher education, as he re-emerges as the Liberal Democrats’ “shadow minister for business, energy and industrial strategy”, the award goes to Sam Gyimah, whose election pledge is to conduct a review of student finance, having resigned as universities minister after starting a review of student funding.

Lifelong Learning Commission of the Year

Winner:
In a crowded field of commissions on lifelong learning, one stood out for its notable lack of productivity: that of the Liberal Democrats, who mercifully wound up their review with the departure of the leader, Vince Cable, who commissioned the commission. Its only discernible achievement was the policy on Skills Wallets, which has caused endless hilarity as a social media meme.

Higher Education or Research Policy (that is never going to happen) of the Year, sponsored by Think Hole, the magazine of incredible ideas

Winner:
A policy that is in danger of becoming the Titanic of higher education comedy awards, sweeping the board, step forward the Lib Dems’ Skills Wallets, described by the judges as “less appealing than a horse-meat lasagne”.

Named after HE’s relentless deputy editor, this award recognises the best excuse offered by a government department, higher education institution or agency for declining a freedom of information request.

Highly commended:
The Office for Students, on the request to release its impact analysis of the effects of a no-deal Brexit on higher education: “It is not in the public interest”.

The Student Loan Company, on the request for figures on the value of loan overcharges that lay unclaimed: “[The information] cannot be released as the cost of complying with your request would exceed the appropriate limit [of £450].” The actual amount of unclaimed overcharging was £28 million.

Senior Manager of the Year Award, sponsored by Revolving Door: the recruitment people

HE’s views and features editor, Harriet Swain, handed out two awards for deserving vice-chancellors, one in recognition of the key leadership skill of breath-taking hutzpah.

The second award honours the other great skill necessary of any world-class vice-chancellor, a Houdini-like ability to avoid tricky conversations:

Winner:
Shearer West, vice-chancellor of the University of Nottingham for declining an invitation to speak at the Oxford Union Society in a debate entitled This House Supports No Platforming, alongside Ann Widdecombe, Katie Hopkins and Toby Young.

Eyesore of the Year, sponsored by Finance Capital, for all your soft-money needs

Lending (much needed) glamour, wit and sophistication to the evening, Research Professional group editor Sarah Richardson was on hand to award the keenly contested prize for ugliest building in higher education or research.

Highly commended:
Bristol University student accommodation
Citation: Everything is not awesome over in Bristol, where a set of three lego-like student accommodation blocks have received planning approval. The towers, part of the University of Bristol’s plans for a new £300 million campus, have been labelled “ugly” and “boring” by opposition councillors. One declared: “I don’t want this to be the scene that people see when they first come to Bristol”.

Winner:
Zenith student accommodation building, Cardiff
Citation: This monstrosity, built this year in Cardiff, is a student accommodation project which has been likened in the local press to something from 1980s Moscow. If you like your student digs to resemble a fortress built of packing pallets, this will do the job for you. But you might need to wait for the privilege of living there—in a move that has raised eyebrows, the developers have won permission to change the building’s use to serviced apartments until the start of the next academic year. Perhaps they’ll put those rents towards some new books on design.

Most Bizarre Funding Opportunity of the Year, sponsored by The United Oil, Deforestation and Tobacco Foundation, transforming reputations through research funding

James Brooks, editor of Research Professional’s Funding Insight, took to the stage to recognise special achievement in the field of research sponsorship, where the sponsor has more money than sense.

Highly commended:
Down with the kids cringe-worthy: “Natural Resources Canada invites applications for its Crushin’ the Cleantech competition. This supports the development of new clean technologies or processes that produce a transformational reduction in the amount of energy needed for crushing and grinding mined material at a mill into a useable product for downstream mineral liberation.”

No you didn’t misread that: “The Worshipful Society of Apothecaries of London invites applications for its rhino elective prizes. These support UK medical students in undertaking training electives in developing countries with a native rhinoceros population.”

Winner:
Have they really thought this one through? “The British Council’s Colombian executive inbound mission—This enables a UK HEI and its business school to host a delegation of 12 to 15 Colombian executives, in order for them to gain a deeper knowledge and understanding of different business sectors in the UK, exporting and international commerce and the Brexit transition and opportunities.”

Making the award Mr Brooks quipped, “I wonder if Michael Gove had a hand in setting that one up”.

Higher Education Personality of the Year

The highlight of the evening came when HE editor Martin McQuillan dragged himself away from the bar to read out the winner of Ivory Tower’s most sought after accolade.

Citation: It has been a year full of characters in the field of higher education and research, from the 40-day minister who quit his brother’s cabinet, to vice-chancellors who have resigned over their refusal to pay rent on university accommodation. We have seen expert brown-nosing and reverse-ferreting, fantastical uncosted policies and eye-watering wastes of money. However, this award recognises an outstanding individual contribution to increasing the comic potential of university life. So, for his commitment to sartorial excellence—he dresses like Compo, Fogg and Cleggy combined—and his zeal for prejudice-based policy making; in recognition of his single-handed attempt to turn British scientists into Ayn Rand anti-heroes and for his secret ambition to build a UK moon base after Brexit, the Ivory Tower higher education personality of the year 2019 is Dominic Cummings.

With the final prize awarded, there was a rush for taxis. Catching the last Uber out of Woking, Alistair Juniper was overheard saying “thank God that’s over for another year”.

Terms of use: this is a free email for fun on a Friday, it should circulate widely like the Alka-Seltzer in the university marketing department the morning after a higher education awards ceremony. Want to host next year’s jamboree? Want to say hello? Email ivorytower@researchresearch.com