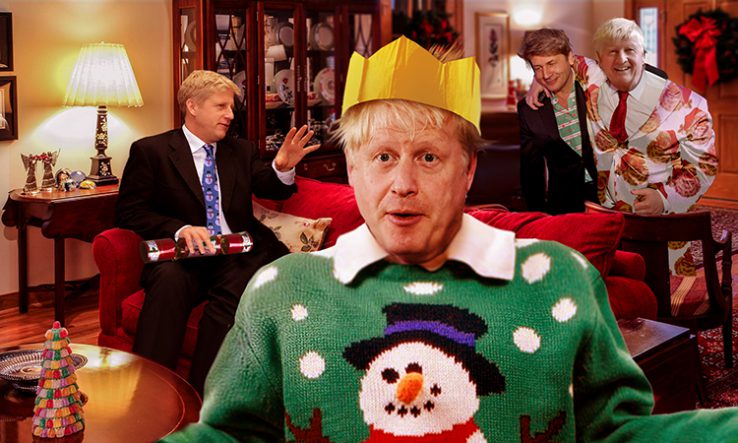 Ivory Tower: We spend the big day with the UK’s first family

Christmas day, somewhere in North London, sitting around the table are patriarch Stanley Johnson, his wife Jennifer, and Stanley’s children Rachel, Leo and Jo accompanied by his wife, Guardian reporter Amelia. They are waiting for Boris to arrive. There is silence and you can hear the grandfather clock ticking in the hallway.

Rachel: Put a sock in it Leo, I’m not in the mood.

Leo: Pass the wine Jo, it’s like the Gobi Desert over here.

Amelia: I knew I should’ve volunteered to work on the Boxing Day edition.

Stanley: Now now, we’ll have no remoaning here. It’s Christmas, so let’s try to be merry.

Jennifer: And when Boris gets here let’s not mention the election.

Rachel: Five more years of this.

Jo: A lifetime of Brexit.

Stanley: Brexit comes with opportunities. Look at the number of times I’ve been on the telly in the last few weeks.

Leo: Dad, they are laughing at you, not with you.

Stanley: Poppycock, remember when I did that jungle thing with those two Geordie chaps, Black and Decker.

Amelia: And what about your latest TV comments that women who fly fighter jets shouldn’t be allowed to wear the burka?

Jennifer: Now Amelia, Stanley means no harm. Let’s try to put all this Brexiting and electioneering behind us and have a nice family Christmas.

Leo: Once Boris gets here.

Jennifer: Once Boris gets here.

Rachel: Where is he? I’ve been putting up with this routine for thirty years: “Sorry I forgot the time—I was busy ruining the country.”

Jennifer: He’s awfully late, I wonder where he’s got to?

Amelia: He’s got a lot of children to get round.

Stanley: At least he won’t be bringing that dreadful blonde woman.

Jo: You’ll really need to be more specific than that dad.

Amelia: Just not the right ones.

Jennifer: I’m warning you all, there will be a forfeit of £1 any time someone mentions the B word.

Jennifer: The other one.

Leo: Brandy butter? Do we have any?

Jennifer: It’s in the fridge.

Amelia: Well, he’ll know how to find it then.

Jennifer: Amelia, do you have to wear that spider brooch?

Stanley: Why don’t you cheer us all up Jo and tell us about the book you’ve been writing.

Rachel: Boris, my part in his downfall?

Stanley: Is it a novel about an MP with a devilishly handsome father, who quits his job to become a spy, and it turns out his father is also a secret agent and together they stop the Russians…

Amelia: No it’s not. Joseph, we agreed what to say when asked that question.

Stanley: Sounds a bit dull, any spies in it?

Leo: Pass the wine Rachel, my glass is drier than an interview with Jo Swinson.

Jennifer: Enough politics. Where is Boris? This is very rude—the turkey will be ruined.

Stanley: Why don’t you pull a cracker?

Rachel: Was that your advice to Boris?

Stanley: Here we go, Jo you pull this one with me.

Stanley: What have we got? A small train whose wheels don’t move, that’s ironic.

Rachel: A paper crown for the king of the world.

Amelia: Why did the turkey cross the road?

Rachel: So it could join the EU?

Jennifer: Do please behave! Jo, read out your joke.

Leo: Why did Nigel Farage not get any Christmas presents?

Leo: He sent them all back to where they came from.

Amelia: Why was the Leave.EU nativity play cancelled?

Jo: How do you know if your family Christmas dinner has been ruined by Brexit?

Jo: Because everyone wants to leave.

Stanley: Now Jo, you must really get over it. Quitting the cabinet was your choice. Had you stayed you could have been the minister for space ports by now.

Rachel: So you could see all the Remainers deported to the off-world colonies.

Jennifer: Rachel, that’s going too far. You must apologise.

Rachel: For what? For lying? That’s rich.

Amelia: Jo, get my coat, we can still be home in time for Strictly.

Jo: You voted Remain too.

Stanley: Are we not allowed to change our minds?

Rachel: I’m off to the soup kitchen under Waterloo bridge, get some practice in for the upcoming apocalypse.

Jennifer: That really is too much Rachel!

Squabbling breaks out, chairs are pushed back. There is a ring of the doorbell.

Stanley: That’s him! Now, everyone try to stay civil. Remember he’s your brother.

Jennifer: Ah Boris, Merry Christmas! Do come in, and who is this you’ve brought with you?

Leo: You are kidding me.

Stanley: Leo, make a space for our guest, if the leader of this country choses to bring a tramp to Christmas dinner then that’s fine. Good King Wenceslas and all that.

Boris: Pater, this is no homeless waif.

Stanley: Really? He looks like the airline lost his luggage and he’s been living out of the YMCA’s lost and found for a month.

Boris: This is my brain, my right-hand honcho, the world’s greatest political strategist, Dominic Cummings—Patroclus to my Achilles.

Rachel: So, you fancy him and you are about to be brought low by a fatal flaw?

Dominic: Merry Christmas Rachel, is it cold out there in Remainia?

Rachel: Not as cold as in your heart Dominic.

Jennifer: Oh yes, you’re Benedict Cumberbatch, do sit down. Now we can begin. Mr Cummings, what do you eat?

Amelia: I heard it was the hearts of the poor and the future of our children.

Dominic: Amelia, are you still here? I thought they’d sacked so many journalists at the Guardian you were writing the crossword puzzle for tomorrow.

Amelia: I won’t ever be short of scandals to write about as long as you’re in Downing St.

Stanley: Shall we try to keep this civil?

Dominic: The Orwell Prize? Was that for whiney-ist, most moonbat liberal prediction of the year?

Jo: Amelia is an excellent writer.

Dominic: Says the man writing a book on ‘ethical investment’. Want your job back, Jo?

Jo: I’d rather die in a ditch.

Stanley: Could everyone just try to get along for the next hour or so, please? Now, Boris will your girlfriend be joining us?

Boris: Ah yes, Carrie, of course. She says she knows how you all disapprove of her and she would rather spend Christmas on the sofa with the dog and a cup of Bovril than listen to you lot arguing about Brexit.

Jennifer: That’s a shame, couldn’t we persuade her to come over?

Boris: Well, I could send the car for her…

Jennifer: It seems we can’t, never mind. Mr Cummings what about turkey?

Dominic: That was Farage’s lot—I never mentioned Turkey once in the campaign!

Jennifer: No, I meant the meat. Do you prefer white or dark?

Boris: Let’s not bicker. It is truly wonderful to be here amongst family and to be giving thanks on this day, of all days. For which we should be truly thankful. Thank you all for coming.

Amelia: Boris, do you know what day it is?

Boris: Of course, I do, we have turkey and cranberry sauce and these excellent roast potatoes, just like the ones we had as children in New York. We should give thanks for this great country.

Boris: Indeed it is, we give thanks for the election result, to the people of the red wall for putting their trust in me to lead this great nation, as we go forward, into the next decade…

Rachel: God, and you thought Corbyn not knowing the time of the Queen’s speech was bad.

Boris: The Queen’s speech? Yes, absolutely brilliant, we’ve had two of those. One which they said was illegal in some way—note to Dom, time to deal with those judges—the other to get Brexit done. I’ve seen a lot of good Queen Liz lately.

Dominic: It’s Christmas day, not Thanksgiving. That’s an American thing, we don’t do that. We are English, remember?

Boris: Absolutely, Dom, that is why I say unto you, we’ve got a Christmas dinner, it’s oven ready. Stick it in the oven. Ping, it’s done. Let’s all move on to the mince pies and cream. I say, get Christmas done and we won’t have to look at each other for another year.

Jennifer: Dinner has been ready for hours Boris and it’s probably spoiled because you were too busy chatting with Douglas Trump or Emmanuel Macaroon or someone to phone us to say you would be late. I’ve had enough of you all, I’m going to take my sherry into the living room to watch Call the Midwife.

Stanley: Now look what you’ve done. The old pater will get gip for this until Epiphany.

Rachel: I’m not. Bloody hate turkey anyway, and it’s not made any better by having to eat it with Santa Trump here.

Dominic: That’s no way to speak about the prime minister of Great Britain and Northern Ireland.

Rachel: I was talking about you, the grinch who stole democracy.

Boris: Crumbs, wonder if old Corbyn has to put up with this over his nut roast.

Leo: Pass the wine Stanley, it’s like we’re on a Millennial’s detox over here.

Stanley: Isn’t this nice. God bless us one and all.

Terms of use: this is a free email for fun on a Friday, it should circulate widely like an unwanted seasonal gift from your in-laws. Merry Christmas and a happy new year to all Ivory Tower and Playbook readers. That’s us for this decade, we return on 6 January 2020.