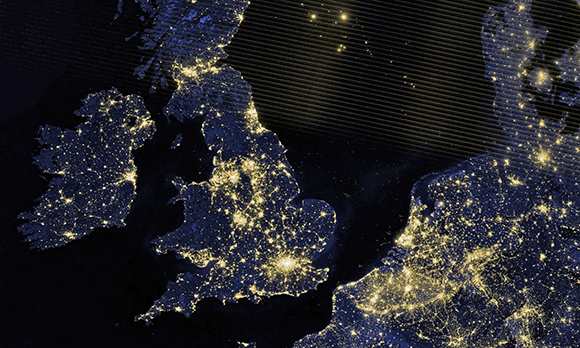 Policymakers must understand that the spread of research investment is complex, say Sarah Chaytor and Graeme Reid.

Despite occasional flag-waving about regional development, the government devotes most of its attention to national issues. The big-hitting departments—the Treasury, the Foreign Office and the Home Office—make policy at a national level. Even when departments have both national and regional responsibilities, national issues often come first.

Most research funding is allocated nationally, focusing on excellence, the industrial strategy and other national priorities. In most respects, this policy has enabled the UK to deliver outstanding performance with modest resources. But it has left the regional spread of research unmanaged.

Looking at the distribution of R&D spending in 2016 shows that three of 11 UK regions scooped just over half the investment (figure 1).

Received wisdom is that this reflects the dominance of a so-called ‘golden triangle’ bounded by Oxford, Cambridge and London, and that it would be good to even things up.

But the picture is not as simple as the breakdown of funding by region may suggest. For a start, the golden triangle regions of London, the South East and East of England contain large numbers of universities, dense populations and a large proportion of the UK economy. It’s no surprise they host a large number of researchers (figure 2).

Analysis by the Economic and Social Research Council shows that a grant proposal from the golden triangle has about the same chance of success as one from another area of the UK. The concentration of funding, in other words, is a consequence of a large population of researchers submitting a large number of bids.

Of course, there are other ways to examine the data. Looking at per capita R&D spending shows that the East of England receives £918 per head, compared with a UK average of £502. At £555, London receives just above the national average, while the North West and Midlands are just below (figure 3).

The East of England also leads in R&D spending per university, at £629 million, compared with £370m in the South East. London lies eighth on this scale, after the Midlands, North West, South West, Northern Ireland and Scotland (figure 4).

The South East, East of England and Midlands attract most business R&D spending, significantly above the North West and London (figure 6).

These data show that there is no consistent or unambiguous concentration of research funding across the UK. While the East of England receives a high proportion of funding on all measures and the North East, Wales, and Yorkshire and the Humber are consistently low, the pattern of distribution across other regions, including the South East, varies.

This suggests that regional disparities in research funding are not straightforward, and the same will go for any policy response. To understand how, where and why research funding is concentrated in different regions, we need a more nuanced understanding of the factors that affect it.

Such an understanding should inform the government’s plan to raise total UK R&D investment to 2.4 per cent of GDP by 2027. According to the Campaign for Science and Engineering, achieving this would require an increase of £26 billion in combined private and public spending above current levels.

Should additional money reinforce the existing distribution of research or move towards something more even? Is there an optimal regional spread of research funding that would support national and regional agendas and the industrial strategy, and persuade corporations to invest in UK R&D?

Research investment by businesses and government is, of course, related to policy in other areas such as transport infrastructure, education and housing. Would giving more power to cities and regions result in a more even spread of research funding?

International comparisons are difficult, but if more federally governed nations are any guide, it seems not. In the United States, for example, six states (California, Maryland, Massachusetts, Michigan, New Mexico and Washington) account for 42 per cent of total R&D investment. In Germany, three Länder of 16 attract some 60 per cent of government research investment.

The Welsh government, in contrast, provides relatively little core funding. It has about 5 per cent of the UK population, but captures only 3.5 per cent of overall R&D money.

Devolved city regions in England could, in principle, support their universities with a view to boosting their chances of winning national and international funding. But there is no sign of such funding on a significant scale.

R&D investment is undoubtedly one factor in the strength of regional economies. It is not a panacea.

Sarah Chaytor is director of research strategy and policy, and joint chief of staff in the office of the vice-provost (research), University College London. Graeme Reid is chair of science and research policy at UCL