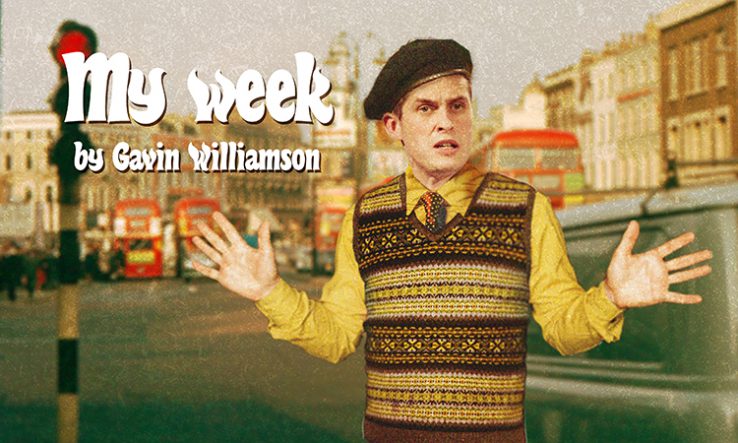 Ivory Tower: exclusive access to the diaries of the education secretary

Got up to reports that Strangers is going to be open after 10.00pm. Hurrah. Another sign the country is getting back to business.

Not such good news from the universities mind, students there have been staying out too late. Super spreading. My spad says this is good though: locking the students up, or down, or whatever, means I don’t have to visit the frontlines. Although maybe I should think about getting to at least one campus, just to show willing. Doesn’t the University of Hull have a Scarborough campus? Not been there for a few weeks.

Apparently they’re starting to put signs in the windows. ‘Help us, send beer’ and the like. I’m told one wag had ‘Help us, send Gavin’. So I’m pretty popular out there. But we’re not making any statement on that at the moment.

Not too sure why universities can’t keep more control of these partying types to be honest. When I was chief whip, I’d have set the spider on them. Cronus vs corona. I should use that one somewhere.

Spoke at the Daily Express’s Blue Collar Conservatism Conference today. I made sure to get a good soundbite in about the issue everyone is currently talking about when it comes to students and higher education: no-platforming and free speech on campus.

I actually spent all night before trying to find a new and exciting example of the thousands of people—millions, maybe—that have been denied a platform by our free-speech-stealing universities. There are millions—maybe billions—of cases. I just know it. Maybe trillions.

Had to give up at about 1am, though. Thought I’d hit gold when I stumbled on a report on the failings of student unions by the Adam Smith Institute a couple of weeks back, but it seems they had only been able to dredge up the same slightly tired examples that everyone else uses. You’d think universities weren’t rampant with this stuff.

I was tired, though, so I went with one of the old ones. Amber Rudd being cancelled at the University of Oxford. Classic. I think it went OK, and according to the instant feedback from Express readers it hit home really well. I reckon with a newspaper readership of that magnitude behind me I’m definitely set for a bit of a jump in the popularity polls.

After, as I thought about a quick nightcap before I went to bed, I saw that parliament’s pubs are actually closing at 10pm after all.

Still, it’s probably for the best. It’s my big speech about lifelong learning tomorrow, so I should keep a clear head. Should help raise my stock a bit after all that unfortunate exam results malarkey.

It turns out the PM has stolen my big speech about lifelong learning! Bloody Boris. Leaves me to front up all the stuff about A-levels and GCSEs like some sort of sacrificial lamb, and then steals the good stuff about reviving further education for himself.

Then Dom phones me to say I don’t even get to deliver the statement about the brilliant way we sent thousands of students back to universities just as the pandemic was gearing up for a second wave. Michelle gets to do it.

Actually, maybe that’s not such a bad thing. Though it does sort of feel like I’m being hidden away for some reason.

And to make matters worse I just Googled how many readers the Express has.

After I decided I was definitely dodging a bullet by graciously letting Donelan do the student statement, Dom called to say I was, in fact, going to deliver it. Apparently people had started noticing that I hadn’t done any interviews about Covid on campus. Or written anything about it. Or tweeted about it. Or thought about it. It’s a bit unfair really, because Michelle hadn’t tweeted anything either and she is the one with “universities” in her job title. I’m just the education secretary.

Anyway, it was fine. The written statement was a bit bland, but I got some zingers in during the debate. While everyone keeps going on about all the students who have got Covid, I pointed out that almost a million of them haven’t got Covid and are perfectly safe. It’s like the way the papers keep telling us how many people have died with coronavirus, rather than reporting how many haven’t.

Apparently there was a bit of annoyance in Great Smith Street when I said we would shortly be publishing guidance about getting students back home for Christmas. It seems they knew nothing about it, but surely they must be used to writing high-level guidance documents about coronavirus at the drop of a mortar board these days? They’ve had enough practice.

I think the only sticky point was when I sort of suggested multiple times that there was £100 million available for universities to use to ensure that youngsters have digital access, which isn’t really the case since it’s mostly for schools and colleges. I don’t think anyone noticed, though. I’ve been claiming that the £256m premium funding is related to the lockdown for a few weeks now and it hasn’t really been challenged.

Bumped into Boris today, he looked a bit surprised to see me. I asked him straight up if he wanted me to resign.

He insisted I had his full support.

“Gavin,” he said. “Remember after you offered to resign over the problems with schools reopening?”

“Yes,” I said. “You said I should stay on until after the A-Level results. What did you call that?”

“Err, sort of like ‘valuable asset’,” he says. “It’s a bit woolly when you try to put it in English.”

“Ah, right,” I say. “Then after that you said I should stay on until after universities had returned?”

I was a little confused by this. Maybe I looked tired.

Later, in bed, I spend another three hours searching for the epidemic of university free speech suppression that I just know is there. Damian Hinds and Sam Gyimah told me about it. I give up and ask my wife what ‘Immolatus Agnus’ means.

“Ahhh,” I say—so I was right! “So if they’re just keeping me so they can blame me for the next disaster, doesn’t that mean I should try to keep ever bigger disasters in the pipeline, so they’ve got reason to keep me around?” I ask my wife.

The sun isn’t up yet, but I can’t sleep. Keep trying to think of something that will mean Boris has to keep me around as his shield.

“You’re repeating yourself,” says my wife.

Terms of use: this is a free email for fun on a Friday, it should be circulated widely, like a bottle of tequila in a locked down student hall. Want us to put a sign in the window for the minister? Want to say hello? Email ivorytower@researchresearch.com