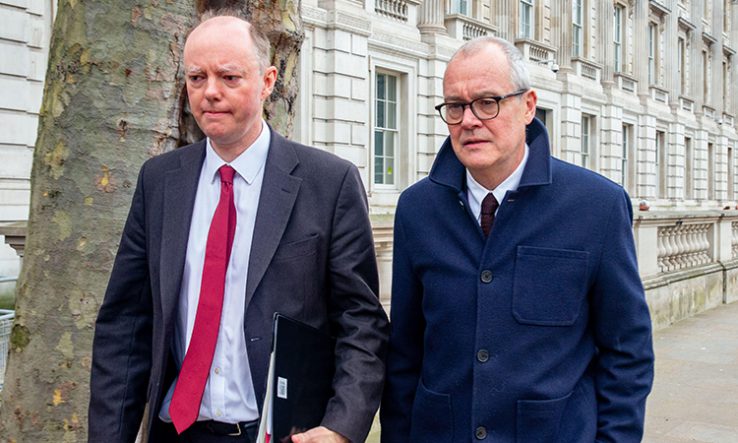 Chris Whitty and Patrick Vallance (pictured) are multidextrous men. At the daily press conferences, Whitty takes the lectern as chief medical officer for England. He is also chief scientific adviser at the Department of Health and Social Care. He is also head of the National Institute for Health Research, which has mobilised at miraculous speed to focus on Covid-19. He has even found time to give the latest of his Gresham lectures, a lucid exposition of all we know (and don’t know) about this and previous pandemics.

Vallance attends briefings as the government’s chief scientific adviser. This comes with a mini-department to run at the Government Office for Science. A medical doctor like Whitty, he is a fellow of the Royal Society and has a deep reach into big pharma as a former president of R&D at GlaxoSmithKline.

But the thing to remember now is that they are both permanent secretaries, making them fully paid-up members of Whitehall’s most exclusive club. It might not be in their job titles, but they inhabit the same universe as the official permanent secretaries at the health and business departments, and attend their Wednesday morning confabs.

That doctrine hasn’t changed. A permanent secretary’s instinct is to keep the government show on the road. It’s an instinct that their department’s top team, including the chief scientific adviser, shares. At critical moments, the minister’s political success is paramount.

Truth, evidence and science come second. As Armstrong put it, civil servants must sometimes be economical with the truth.

As chief scientist, Vallance serves the prime minister, which for practical purposes may often mean Dominic Cummings. The special adviser’s presence at the Scientific Advisory Group for Emergencies has been widely misinterpreted. All advice within Whitehall is political. Its purpose is to help the government—which means Tory ministers.

Ministers serve the public interest, to some extent, just as to some extent they serve their personal and party interests and follow their ideological proclivities. It’s not for civil servants or science advisers to weigh the ratio.

Whitty, Vallance and the civil service scientists on Sage speak truth to power, but sotto voce. What they don’t do is complain publicly if they are ignored or their numbers distorted. They are serving ministers, not Minerva.

Ian Diamond, head of the Office for National Statistics, will be striving to ensure that Sage gets good figures. But he is silent when ministers such as Matt Hancock or Michael Gove use them with the creativity of Renaissance artists.

Diamond has cover. What the ONS puts out is inspected by the UK Statistics Authority, an independent public body. Critics say this authority lets through a lot of dodgy numbers issued by other parts of government, but at least it’s a visible watchdog.

And without getting hung up on the scientific status of economists or whether they should be among the few social scientists connected to Sage, let us say that at least the Office for Budget Responsibility’s public invigilation of the numbers behind economic and fiscal policy forces honesty on the Treasury.

So where is the Office for Scientific Responsibility or the UK Scientific Advice Authority?

Whitty, Vallance and the science chiefs have made a one-sided bargain. They have offered their intellectual integrity but have no guarantee that ministers will behave with probity—that they won’t unleash their attack dogs in the media and won’t shift blame when it suits.

This is presumably why former chief scientific adviser David King felt the need to establish his shadow Sage, even at the price of having his and colleagues’ reputation trashed by the Tory newspapers and their social media outriders.

It was not always thus. All chief scientists under Margaret Thatcher were pretty much on side in refocusing the research effort on applications and commercial development. But Thatcher, while dogmatic, was proud of her chemistry degree and research experience and had a soft spot for fellows of the Royal Society. Respect was reciprocal.

Even the most politically realistic science advisers must be finding that the gap between their ministers’ views of the world and their own is gnawingly large.

David Walker is a former council member of the Economic and Social Research Council. He is the author, with Polly Toynbee, of The Lost Decade (Guardian Faber)