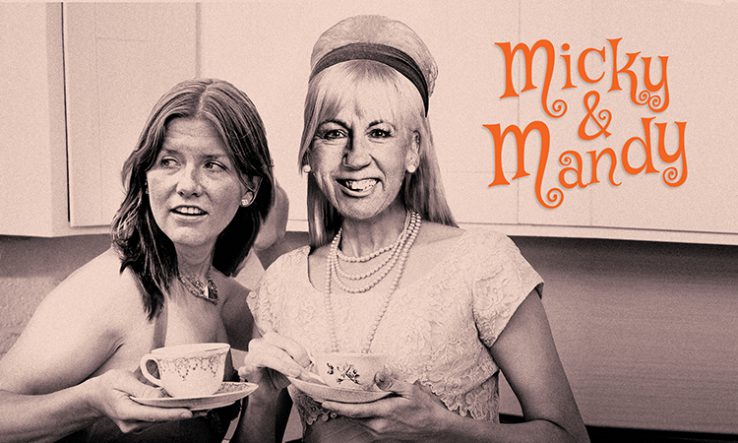 Ivory Tower: Another episode of our Whitehall lockdown flatshare sitcom

Somewhere in SW1 in an apartment block set aside for the use of ministers during the pandemic. In one flat live the ministers for universities and science.

Title: Micky & Mandy is not filmed before a live studio audience.

Micky: I can’t believe you are eating that.

Mandy: I have the same thing every morning, a Pop-tart and a brew.

Micky: I know, why don’t you try some fruit once in a while.

Mandy: I have my five a day.

Micky: What did you have yesterday? Go on, name them.

Micky: On a peanut butter sandwich.

Micky: I’ll give you peas.

Mandy: What about you? You have the same thing every morning.

Micky: Granola, blueberries and Greek Yogurt is quite different.

Mandy: I don’t know how you can consume that stuff.

Mandy: No, the Telegraph that you have delivered.

Micky: We don’t all get our news from the Mail Online.

Mandy: I read the Metro as well.

Micky: I’ve been meaning to say Amanda, when this is all over, perhaps we should get separate…

Micky: Most people wait before they are allowed in.

Dom: I’m an exception to the rules.

Micky: We know that.

Mandy: Rugby? Anyone fancy watching a game later? League rather than Union, of course.

Dom: I don’t have time right now. I came to see about the plan for restructuring universities.

Dom: Right, let’s have a look. Vice-chancellor’s pay, check; student unions and free speech, check; mergers with FE college’s, check; loans not grants, check; government appointee to run the board of the Restructuring Regime, check. Looks like it’s all here.

Micky: On that one, have you had any thoughts about who could be Regime Controller?

Dom: We need to find something for Chris Grayling now, so this looks about his level.

Mandy: He’ll end up burning down the university.

Dom: Wouldn’t be a bad thing for some of those left-wing madrassas.

Mandy: Am I missing something, I thought we were all about levelling-up the nation.

Dom: Before we level up, first we have to burn everything to the ground. I want to watch the world catch fire and engulf this old sick order in purging flames.

Mandy: Dom, are you alright hun? Do you want a cup of tea?

Dom: Do you have any soya milk?

Dom: Got anything Russian?

Mandy: I’m confused, how is merging universities with FE colleges going to help the disadvantaged?

Dom: It will help principals of FE colleges, they’re disadvantaged.

Micky: You see Amanda, it’s like I told the Commons education committee, it isn’t important to look at which groups don’t go to university.

Mandy: Isn’t it? I thought that was pretty much what higher education policy was about.

Micky: No, what is important is that everyone comes out of university with a graduate level job.

Mandy: Is it? There aren’t many graduate level jobs about at the moment.

Micky: Of course it is. If they don’t have graduate level jobs, how will they clear their student debt?

Mandy: Which we put them in to go to university?

Mandy: But if we don’t have autonomous universities in towns, how will we level them up?

Dom: They can have a dual carriage way or something, instead. I’ll leave that with you Donelan—get the DfE to do a report on the cross-over between universities needing a bailout and towns without a ring road.

Mandy: How will building roads substitute for higher education?

Dom: Tarmac to give back. Build, build, build—just not universities.

Dom: It’s very simple Amanda. Graduates are way more likely not to vote Tory than those without degrees.

Micky: Must be something to do with all that reading and learning.

Dom: We want to cut the number of graduates and increase the number of taxi drivers and radio phone-in contributors. That way, the seat of Derby North will remain Tory forever.

Mandy: So, we level-up by closing down, is that it?

Micky: No one is talking about closing down universities, just shrinking them a bit.

Dom: Quite a bit, fifty per cent ought to do it.

Mandy: So, they can teach what they want?

Dom: Dear God, no. Michael Gove is working on a national curriculum for students, starting with PE at 7.00am every morning.

Mandy: But, what about all the science? What is going to happen with all that research money?

Dom: I’m sure ARPA can find ways to spend it.

Micky: Is that a private provider?

Mandy: In a sense.

Dom: Look, I don’t have all day to explain how the world works to Laverne and Shirley. I need to call Elon Musk about Mary’s Christmas present.

Micky: You are getting her a Tesla?

Dom: No, for her birthday I told her Barnard Castle was out of this world. Now she wants a real space flight.

Boris: Tally ho, saddle up fillies, I’ve got thirty minutes before Carrie realises I’m not really out buying a pint of milk.

Boris: Quite right too, Cambridge is a complete dump.

Mandy: There are more than two universities, prime minister.

Boris: Are there? Gosh, is that why old Tadpole Wilson went to Durham when he got sent down from Eton?

Mandy: There are actually over 130 universities in the UK

Micky: And nearly 400 providers of higher education registered with the Office for Students.

Boris: Crickey, that seems like too many, Tony Blair has a lot to answer for.

Mandy: Actually, it was your brother who…

Micky: Would you like some tea, prime minister. I’ve got lapsang souchong.

Boris: Have you been tested?

Dom: I think we have to go now, Boris, you need to prep for Keir Starmer.

Boris: But PMQs is on Wednesday.

Dom: You are going to need all the help you can get.

Boris: I was just going to call on a friend down the hall…

Dom: No, Boris come with me, and we better buy a pint of milk on the way.

Mandy: I don’t get it. They say they want to level up the country but everything they do seems to have the opposite effect.

Micky: It’s almost as if they say one thing and do another.

Mandy: Here, do you think there is anything else they might not be being entirely straight about?

Micky: Amanda, I told you not to say that, this place might be bugged.

Mandy: It’s definitely bugged, I found a cockroach in the shower the other day.

Micky: I don’t mean invertebrates, you ninny. Right, I have to zoom Gavin Williamson.

Mandy: I though you weren’t talking about invertebrates.

Micky: Only not as interesting, or useful. What are you doing today?

Mandy: I’ve got to choose something to go into the AHRC’s online museum of boundless creativity.

Mandy: A set of technology lessons with Jennifer Arcuri.

Mandy: Here, Michelle you were saying before Rigsby turned up that perhaps we should get separate something or other. What was it?

Mandy: No, I’m happy to share some Lambrini with you.

Micky: Great, will we watch a box set of the Liver Birds tonight?

Mandy: Bit socialist that, what about The Golden Girls?

Micky: The Lambrini is on me.

Terms of use: this is a free email for fun on a Friday, it should be spread widely unlike a select committee report on Russian influence. Want to throw your hat in the ring for the job of Regime Controller? Email ivorytower@researchresearch.com