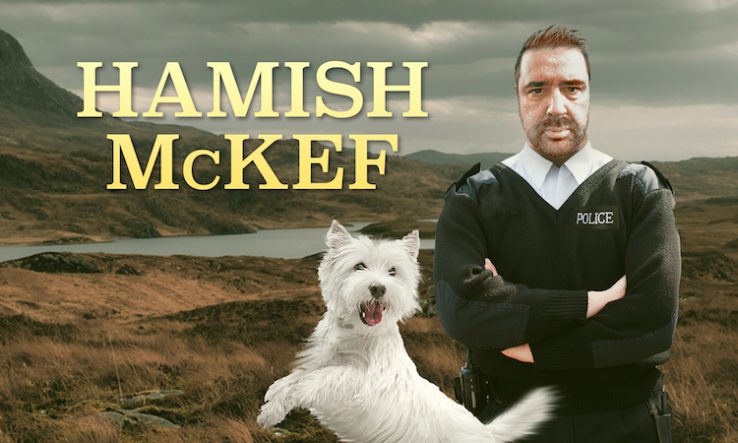 1. INT. The local post office and convenience store
Constable McKEF is picking up a few groceries

Postmistress: Oh it’s yourself Constable, what can we be doing for you today?

McKEF: Just a sandwich Mrs McAlister and some biscuits for the dog.

Postmistress: Aye, he’s a bonnie wee thing, how is Impact?

McKEF: He’s just in the car outside Mrs McAlister, we are on our way to meet the boat from the mainland.

Postmistress: I hope ye are no thinking of getting on it, Constable. There are terrible rumours going around that you have put in for a transfer.

McKEF: Well, it’s something I’ve been thinking about.

Postmistress: And what are we to do here on the Island of Place? Who is going to ensure best practice in business engagement and external partnerships? Who is going to audit our collaborative working practices and our change readiness?

McKEF: I’m sure they’ll send over another knowledge exchange officer.

Postmistress: Och, it will no be the same, the cast of one-dimensional yet eccentric characters who live on the island will miss you terribly. I hope you’ll meet some of them on the way to the harbour and through their folksy charm and comic misunderstandings persuade you to stay.

McKEF: I’ve really got to go, Mrs McAlister, wee Impact will be wondering where I’ve gone.

Postmistress: Aye, it’s nae wonder you’ve not been able to form a lasting meaningful relationship with any of the guest actors we’ve had on the island in the last three series, you are too devoted to that wee dug.

2. Ext. Outside the Post Office
McKEF is trying to get into his car, a battered police Land Rover. A large man with a tartan cape, deer stalker and pipe stops to chat with the constable.

McKEF: I’m on my way to meet the boat from the mainland, Doctor Stramash.

Man: Yer no thinking of leaving us are ye, Hamish? I was hoping you would take be joining us this evening for a capacity-building workshop. I’ve had the sand pit cleaned and everything.

McKEF: I’m really not sure Doctor.

Man: We are having a poster competition. You’ll no be expecting me to judge that on my own now, will ye?

McKEF: I have to go.

Man: And who will be looking after our translational environment as part of the innovation curve, when you are gallivanting on the mainland?

While the man is talking McKEF manages to get into his car and drives off, waving as he goes.

3. Ext. A rural road on the Island of Place.
A car has broken down, McKEF stops to help. A woman is looking under the bonnet at the engine.

Woman: You must be Constable McKEF, and that must be wee Impact.

McKEF: That’s right, but I don’t know who you are.

Woman: I am, or was, the implausible love interest for this series. We were supposed to flirt for the first four episodes before reaching a stage of unresolved tension in episode five and then I would unexpectedly take a new job on the mainland in episode six. But there’s no point now.

Woman: Because it looks like you are on your way to the harbour to catch the ferry, leaving behind a knowledge exchange framework that shows potential to transform applied research in the UK but has yet to deliver a strong evidence base as a justification for the distribution of the Higher Education Innovation Fund.

McKEF: Can I help you with your engine?

Woman: No, because not only am I implausibly the only English character on the island, I also implausibly have a PhD in mechanical engineering, even though I’ve come here to do an unspecified job that involves walking on the beach and occasionally tapping on a laptop in a back room of the Big Hoose.

McKEF: Well, if, you are sure.

McKEF gets in his car. Wee Impact sticks his nose out of the window at the woman and gives a sad whine.

Woman: It would never have worked constable. Everyone knows that you can’t love anyone as much as you love knowledge exchange.

4. The harbour.
McKEF parks up and takes a suitcase from the boot of his car. He and wee Impact head for the quay, where we can see a ferry in the distance. They are approached by the harbour master.

McKEF: Hello, Mr Sweeney, looks like the boat is on time for once.

Sweeney: Och, away we ye McKEF, what’s all this with the suitcase and the dog biscuits? Are the rumours true?

Sweeney: Havers man, enough of yer blethering. Who is going to be the honest knowledge broker round here while you are living it up on the mainland?

McKEF: I would hope that the systems I have put in place would be transferable and repeatable.

Sweeney: Will ye no think of the community of practice? Whit about Reverend Fearty, the implausible minister who manages to keep that huge church running with just a congregation of five and who relies on you for engaging in partnerships with other stakeholders? And Mrs Drookit, the only school teacher on the island whose pupils never get any older from one series to the next. She needs you to help make direct presentations to decision makers.

McKEF: Everyone will be just fine without me.

Sweeney: And what about me? How am I to convince senior policy makers of the benefits of investment in research infrastructure as a way of addressing regional inequality without a strong evidence base of local impacts through innovation and public engagement?

McKEF: I’ve thought long and hard about this Mr Sweeney. My mind is made up.

Sweeney: But why? Is a fourth series of knowledge exchange-based comedy among a community of eccentrics and Scottish character actors not enough for you?

McKEF: I can’t tell you.

Sweeney: If you go, they’ll bring back Ballykissangel and we’ll all have to dust down our equity cards. Just tell me why?

McKEF: I’ve got a secret.

Sweeney: What is it Hamish, you can tell me.

McKEF: It’s something I’ve been wanting to tell people for a while, I guess it can’t hurt now.

Sweeney: Come on lad, out with it, we are an implausibly understanding and welcoming monoculture of islanders who have never travelled beyond these shores.

McKEF: I feel so stupid now, I should have told everyone before.

Sweeney: Ye can tell me, son.

Sweeney: Just say it, I’ve heard it all before.

Sweeney: Aye, well ye best get on that boat and no come back then. Off ye go and take that dug wae ye.

McKEF: Goodbye Mr Sweeney. Shall we shake hands one last time in a firm and manly fashion?

Sweeney: Och no, now that I know ye are English, ye can sling yer hook. And don’t come back here quoting yer Barnett differentials at me.

McKEF: Come on Impact, let’s get the boat.

Wee Impact looks up at Mr Sweeney with a sad face and gives a little whine.

Sweeney: I’ll miss you too wee Impact. Look after him, he’s alright for one of those English fellas.

Closing titles:
Folk music plays as Hamish and Impact look over the rails of the ferry as the Island of Place recedes in the background.

Terms of use: this is a free email for fun on a Friday, it should be shared with friends like legal advice from the British Virgin Islands. Want to apply for the post of knowledge exchange officer on the Island of Place? Want to say hello? Email ivorytower@researchresearch.com