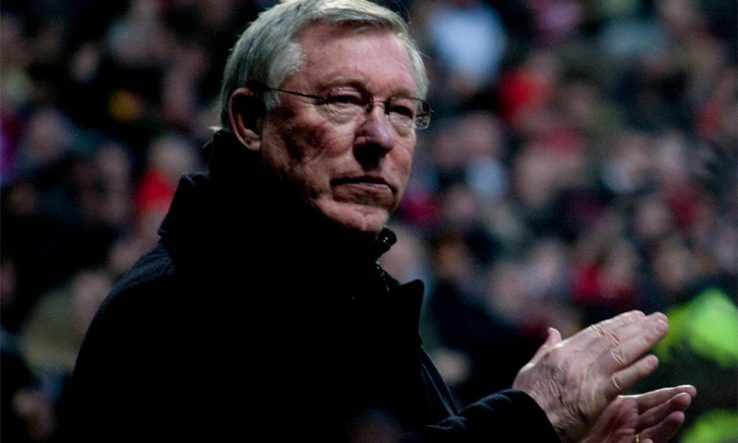 With the news that Sir Alex Fergusson is to become a visiting professor at Princeton University, he warms up by giving the great and good of British universities a half-time team talk.

Right, you lot, whit the hell is going on out there? It’s only November and I’ve never seen a shambles like it. Call that a performance? I’ve seen better turns at the Manchester Apollo. Where do I start? How about the defence?

I’m looking at you vice-chancellors. Where’s the defence? Who’s standing up for universities? Don’t look about for someone else. That’s your job.

You are paid enough, aren’t you? Swanning in here in your chauffer-driven Bentleys, acting as if you are top dog. I haven’t seen such a bunch of highly paid prima donnas since we played against Real Madrid. They are calling you the prawn sandwich brigade.

The right wingers on the other side are killing you, making you look like mugs. You need to get yourselves organised and stand up to them. You need to get out there and turn the game on its head instead of passing the ball…sorry the buck between you.

The league table doesn’t lie, some of you are in the bottom half and deserve to be. The elite? I’ll give you Russell Group, more like the group of death, pal. MillionPlus? There could be a million of you out there and you’d still be making no impact.

You’re losing the dressing room, and this should be a wakeup call. Remember you can all be replaced, even Gary Neville thinks he’s a vice-chancellor now.

And as to the strikers. Whit’s your game? You are acting like a bunch of pensioners. Oh, you are striking about your pensions, right I get that, but what kind of formation is this? Call that a picket line? You need a better shape, strung out across the middle so nothing can get past you.

This strike has nil-nil draw written all over it. You need to pick up the pace and get in their faces. Put it in the mixer. Results have gone your way with the pension fund recording a surplus, now you have to kill off the game.

It needs to be like how Rio Ferdinand marshalled the United back four when a cross came in—one out all out. That’s how you get the decision. You’ve gone so long without winning anything you are beginning to look like Spurs.

Right, who’s next? Halfon? You’ve only been on the pitch five minutes. There’s been so much chopping and changing no one knows whit’s going on anymore. Talk about a schoolboy error. It’s worse than the managerial merry-go-round at Watford.

There have been enough education secretaries this year for a five-a-side team. It’s a funny old game and no mistake. You better knuckle down and see this game out. This government is running about like a headless chicken. Wilfred Zaha lasted longer at Man Utd than some of you lot have at the department for education.

Keegan? I used to know a fella with that name. He blew a big lead, not that there’s any chance of you lot doing that. You are so far behind you might as well be Derby County. “I’d love it if we beat them,” that’s what Keegan said and look what happened to him—ended up managing Man City, back when they were rubbish obviously.

I want to see everyone at the DfE giving 110 per cent, and don’t give me any of that maths snash about that being arithmetically impossible. Anything is possible, even Everton winning a trophy.

Whit you smiling at Freeman? Think this is funny? At least Halfon knows what position he’s supposed to be in. There are two of you doing the same job. Or not doing any kind of a job to be more accurate.

Do you want to get into Europe or not? You’ve been trying for so long, you were the science minister when the talks first started, then you left, have come back again, and the negotiations still haven’t gone anywhere.

There’s two of you out there and you still can’t win a challenge. I haven’t seen such a useless pairing since Nicky Butt played alongside Eric Djemba Djemba. In case you are wondering Djemba Djemba was only one guy but with two names. You are two people with one title.

You’ve got to be canny when playing against teams from Europe, they’ll run rings around you if you’re not careful. You need a plan B for when things go wrong.

You’ve got a plan B? Well, when are we going to see it? You going to leave it so late that it doesn’t make any difference? It’s to do with the Irish protocol? The only Irish protocol I want to see is Roy Keane running after ye shouting “do your job”.

Speaking of doing their job. Son, you shouldn’t bother going back out there again. You’ve quit? I should think so, Williamson. I thought you’d quit when you were secretary of state for education.

Whit a performance, let go by three separate prime ministers. Minister without portfolio? There’s still time to grab a spot on I’m a Celebrity Get Me Out of Here. Now that you’ll be able to spend more time in your constituency, we are about to find out how you get on during a cold Wednesday night in Stoke.

Where’s that Rishi Sunak? Sitting there with your Instagram hair and your rich wife, who do you think you are son, David Beckham?

There are too many snowflakes out there. There’s nothing wrong with robust argument, like that time an Arsenal player threw a pizza at me. We didn’t need a free speech bill to stand up for ourselves. We just got Roy Keane to have a go at Patrick Viera in the tunnel at Highbury next time we played them.

As for the Lifelong Loan Entitlement, is that got something to do with all those old strikers Ole Gunnar Solskjaer was bringing in from duff teams in Italy? Let me tell you, no one is entitled to anything in this game. Except of course eight minutes of added-on time at the end of every game Man Utd are losing.

But we earned that. They used to call it Fergie time. We were so good we even owned time. Like the FA cup, it had our name on it.

Whit have you lot ever done? Taken a once great institution and run it into the ground so that it no longer performs, and everyone involved in it are threatening to walk away. Do you think you are the Glazer family?

Right, I’m off to Princeton to talk to them about how to win Noble Prizes. You lot sort yourselves out and don’t make me have to come back here to gie ye all the hair dryer treatment again. No one goes to university to be lectured at.

Terms of use: this is a free email for fun on a Friday, it should be shared among colleagues like blame for a disastrous mini budget. Want to book Sir Alex for a motivational talk at your next staff away day? Want to say hello? Email ivorytower@researchresearch.com