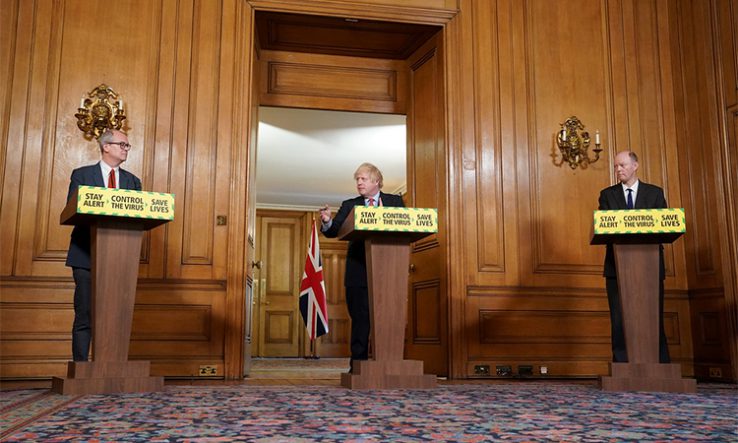 The UK government’s authoritarian approach to Covid-19 communications hampered society’s ability to respond to the pandemic and left scientists to explain decisions made by policymakers, a scoping inquiry by the charity Sense about Science has found﻿.

The pandemic created a huge public desire to understand what was going on, as well as unprecedented engagement in the evidence behind policies. Over three-quarters of adults sought information from government websites. Perhaps for the first time, there was widespread public acceptance of scientific uncertainty, and a willingness to discuss and follow advice based on incomplete data.

This gave government a unique opportunity to share what it knew—and what it didn’t—to help care homes, restaurants, schools and businesses understand the reasons behind policy decisions, and enact them as effectively as possible.

Instead, ministers opted for simple slogans and rules, leaving scientists, especially those in Sage, the Scientific Advisory Group for Emergencies, to respond to society’s need for evidence. But not all policy decisions were based on scientific evidence, and the researchers were not studying every aspect of the pandemic.

Rather, SPI-M, the pandemic-modelling subcommittee of Sage, only ran the scenarios that ministers requested. So, for example, because those did not include the harm done by closing schools, researchers could never recommend an ‘optimal’ strategy that kept children in school.

In effect, decisions were predetermined by policymakers, but framed as being based on science. Our conversations with senior civil servants, departmental analysts, the Government Office for Science, Sage, government advisers and MPs—and with people from all sectors of society trying to interpret policies in their settings—show that this was not an isolated case. The report, What Counts?, is published today.

Ministers repeatedly told the public that the government’s response was built on scientific and medical advice: chief advisers Chris Witty, Patrick Valance and others took centre stage in press briefings. In the absence of other explanations for government decisions, this seemed plausible. Perhaps it is inevitable that, in a crisis, people look to scientists for authoritative reassurance.

It is risible, though, to expect scientists to explain all aspects of the pandemic and politicians’ choices. They can provide evidence and advice on likely outcomes, but ultimately making trade-offs between relative harms is a value judgement.

Why, then, did the government refuse to talk about well-established principles of health economics, such as quality-adjusted life years, which form the bedrock of decision-making in the NHS? Why did the Treasury fail to share any of its modelling or analysis?

Sound science is critical in a crisis, but it does not give the whole picture. Sage’s documents are technical and designed to advise government, not inform the public. They don’t include the contextual information needed to understand specific dilemmas.

But, as the only source of information available to the media, modelling and data were expected to provide all the answers. Models were criticised for not accurately predicting deaths, even though that was not their function, and worst-case scenarios became seen as dire warnings rather than outliers among half-a-dozen possibilities.

While many modellers resisted the pressure to stray into areas outside their expertise, some put themselves forward as policy spokespeople. It was notable during the gradual unlocking, amid much public debate about risk and priorities, that some scientists offered opinions despite having no data and doing no modelling.

Ultimately, ministers’ dereliction left a gap that was too big for scientists to fill. Nor should they be expected to: the ministerial code makes clear that “government should publicly explain the reasons for policy decisions [and] accurately represent the evidence”.

The public was shortchanged with simplistic rules instead of proper explanations. Soundbite guidance is not a basis for complex trade-offs in education, health and social care, transport and so on, and making it so does harm.

For example, by continuing to assert that Covid did not discriminate, long after it was understood that the risk of infection and death is strongly age-related, government prevented society from making balanced decisions that could have prioritised the protection of the most vulnerable and reduced the impact of restrictions on children.

Government has a role in enabling society, not just instructing it. Authoritarian communications may get results in the short term, but the pandemic has shown that to implement rapidly evolving policies in varied settings over time, people on the ground need to be empowered to make well-reasoned judgements.

David Schley is deputy director of Sense about Science, an independent charity that promotes the public interest in sound science and evidence