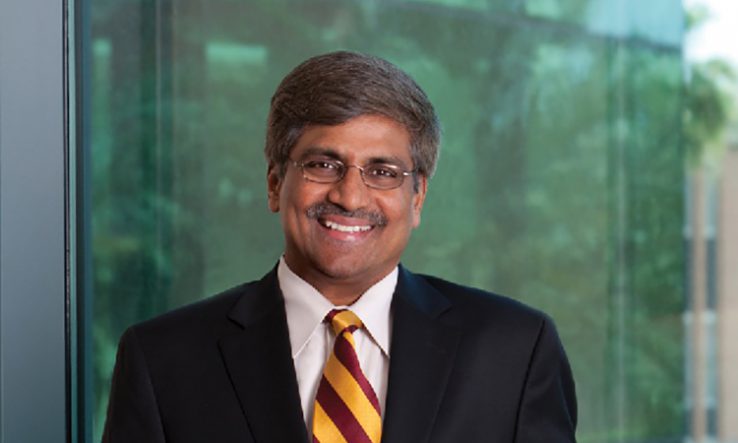 United States president Donald Trump has said experienced National Science Foundation board member Sethuraman “Panch” Panchanathan should be the next director of the huge funding agency.

The December announcement was enthusiastically pushed by Kelvin Droegemeier, director of the White House Office of Science and Technology Policy and Trump’s top science advisor.

“The impending formal nomination of Dr Panchanathan is a win for science in the Trump Administration and a win for America,” Droegemeier said in a statement.

With a budget of $8.3 billion for 2020, the National Science Foundation provides about a quarter of all federal funding for basic research in US universities and colleges.

Panchanathan (pictured) has served on the National Science Board, which helps to shape NSF policies and advises the US president and Congress, since 2014. He has also chaired the NSB’s committee on strategy.

Current NSF director France Córdova, who will be replaced by Panchanathan when her six-year term ends later this year if the Senate approves his nomination, also hailed the announcement.

“For five years, Dr Sethuraman Panchanathan has been a bold, energising presence on the National Science Board and he was a leader in every sense of the word in the research community prior to that,” Córdova said in a statement.

“I was delighted to learn that the White House named him as nominee to serve as the next director of the National Science Foundation.”

Córdova said that Panchanathan “has the character and knowledge that make him an ideal fit for the job”.

NSB chair Diane Souvaine said in a statement that Panchanathan “is drawn to public service for the right reasons—a passion for our country and how our discoveries and innovations can make the world a better place”.

The White House announcement stuck rigidly to a history of Panchanathan’s career, setting out that he is currently executive vice president and the chief research and innovation officer at Arizona State University, where he is founding director of the Center for Cognitive Ubiquitous Computing.

He has also been a member of the National Advisory Council on Innovation and Entrepreneurship, and is currently the vice president for strategic initiatives of the National Academy of Inventors.

Panchanathan started down the road to stardom in India, where he obtained undergraduate degrees in physics from the University of Madras in 1981 and electronics and communication engineering from the Indian Institute of Science in 1984.