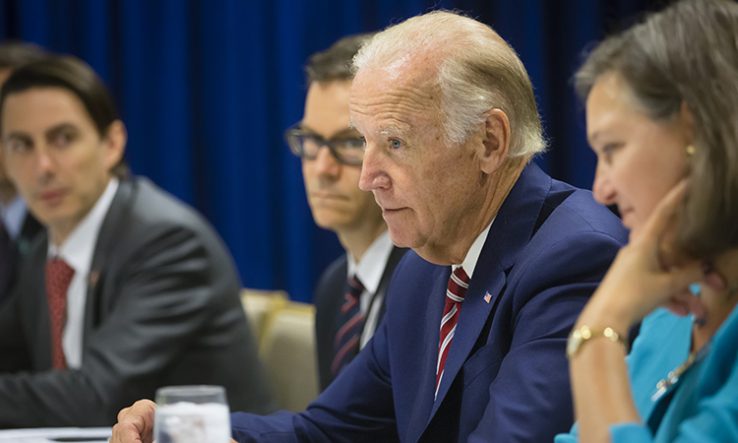 Image: Drop of Light, via Shutterstock.com

Caveats aplenty on global hopes for incoming US president’s approach

Research leaders and higher education experts around the world have begun scouring US president-elect Joe Biden’s past for clues about what his presidency holds for the sector.

“We’re all fishing to find what a Biden administration means, but I think it does mean a pro-European policy,” says Simon Marginson, a professor of higher education at the University of Oxford and director of the Centre for Global Higher Education.

Regardless of policy, Biden’s administration will be a significant departure from that of his predecessor, Donald Trump. The Trump presidency saw the US pull out of the global Paris agreement on tackling climate change and leave the World Health Organization (WHO) as the country grappled with the Covid-19 pandemic.

So far the signs are better for Biden’s four-year stint, many believe. Hopes are growing that under him the US will once again push forward key international issues such as climate change, as well as more sector-specific issues such as open access.

“Biden’s victory should set America back on course to play a leading role in global efforts to fight climate change,” says Nicholas Stern, chair of the Grantham Research Institute on Climate Change and the Environment in London.

“The next four years are crucial, and with a US president in office who once again recognises global warming as an existential threat to humanity we have a chance, if we work together, to avoid the worst impacts of climate change.”

Stephan Kuster, head of institutional relations for the scientific publisher Frontiers, agrees. “We’re already seeing major shift in terms of rhetoric and symbols in terms of a more pro-science and evidence-based administration,” he says.

He and others are optimistic about Biden’s ability to muster support for open access, perhaps through the creation of a government-backed initiative akin to Europe’s Plan S—which mandates that researchers receiving grants from supporting funders make their results publicly accessible starting in 2021. Despite rumours of such a plan under Trump, it failed to materialise during his presidency, notes Kuster, who adds that “hopefully we’ll see a more decisive push” under Biden.

More broadly, global research-watchers think partnerships with the US might become easier to secure on science-related issues.

“We’ve had a science-denying president in the US for four years,” says Jan Palmowski, secretary-general of the Guild of European Research-Intensive Universities.

“We also need to be aware that things can change. You can’t just rely on other big powerhouses to provide Europe with the technology it needs.”

Biden’s ability to enact changes will depend heavily on whether the Democrats secure a majority in the US senate. Barring a senate majority, “we shouldn’t expect any miracles there”, says Kuster.

While Biden has promised to rejoin the Paris deal and to normalise relations with the WHO, there is scepticism over whether his US will join another initiative of huge importance to research: the 2021-27 EU R&D programme Horizon Europe.

Robert-Jan Smits, former head of the EU directorate general for research, is unequivocal. “Association [the EU term for joining Horizon] is a non-starter—I think that will not happen,” he tells Research Professional News.

He adds that the US government was “extremely reluctant” to accept that if US entities, including universities and companies, were to receive EU funding, then they would be subject to audits by the EU. He also cites a history of difficulties in government collaboration with the US government.

“For many years I didn’t even have a counterpart in the US,” Smits says of his time co-chairing the EU-US Joint Consultative Group Meeting on Science and Technology Cooperation.

He says he will be watching the speed at which Biden appoint a science adviser, something that took Trump nearly two years.

This is just one indication that, while fast to share warm words for the incoming US president, many in the research world are cautious of counting their chickens before they hatch.

He expects the incoming president to have a bumpy ride into the White House: “Republicans are going to throw every legal resource into this, and I think the transition will be contested and maybe even delayed…Biden won’t be able to get his feet on the ground”.

While the world’s eyes are already on the 46th president, Trump isn’t finished yet, says Alan Yu, a senior fellow in international climate policy at the progressive think tank, Center for American Progress.

“In this ‘lame duck’ period of the Trump administration, we’re likely to see a couple more significant and damaging rollbacks from the Environmental Protection Agency,” he warns.