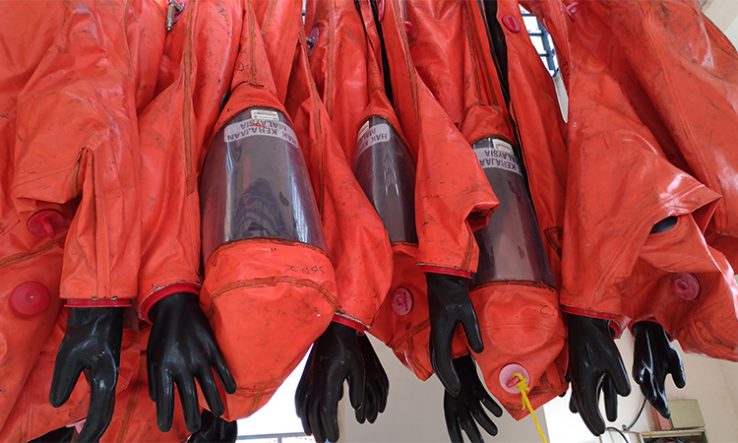 Since the Covid-19 outbreak was first identified in China in December last year, billions of dollars have been committed for R&D related to the virus.

On 4 May alone, $8 billion (€7.4bn) in R&D spending was pledged in a fundraising drive hosted by the European Commission, amid increasingly urgent calls for support from groups such as the World Health Organization and the Wellcome Trust.

Yet before the current crisis, funding for research on the whole family of coronaviruses—which includes both the SARS and MERS viruses that previously made the jump from animals to humans—was a fraction of the sums currently pouring into R&D for Covid-19.

“R&D funding for coronaviruses has been, let’s say, appalling,” says Julian Hiscox, an infectious diseases researcher from the University of Liverpool in the UK who specialises in these pathogens.

One research group from the University of Southampton in the UK has estimated that of over $100bn spent on infectious disease research between 2000 and 2017, only $500 million went on coronaviruses.

“We’re not very good in the global health community at looking ahead and planning,” says Michael Head, who leads the Southampton group. “What we need to be doing is a lot more planning in the inter-pandemic period for future threats.”

Paul Barnsley is a health economist in charge of an upcoming report on emerging infectious diseases at Policy Cures Research, a specialist non-profit focused on global health R&D. He says that while coronaviruses have attracted more funding in recent years than other potential threats like Rift Valley fever and Lassa fever, “they are swamped by diseases for which there have been active outbreaks”.

Data shared with Research Europe by Policy Cures Research show that between 2016 and 2018 coronaviruses accounted for less than five per cent of global funding on emerging infectious diseases: about $115m. Ebola, by contrast, took nearly fifty per cent of funding—$1.1bn.

“Obviously what we’re going to see in future is a phenomenal peak in response to the Covid-19 pandemic,” says Barnsley.

Problematically, when outbreaks fade from the public view, funding fades too.

“That’s suggestive of fighting the current war and then forgetting about it when it’s over,” says Barnsley.

This pattern of reactive funding plays out in the long-term data for research on coronaviruses collected by Head, with sharp spikes in 2004 and 2015 corresponding to the SARS and MERS outbreaks, and minimal spending in other years.

Spending on current dangers at the expense of future threats is a recurrent pattern in disease research.

Since clinical trials can only be run during a disease outbreak when it is possible to enrol patients, and since clinical trials are expensive to run, this overall pattern of big spikes in R&D spending is understandable. But failing to follow up rapid-response investment with longer-term planning frustrates many researchers.

David Heymann was in charge of the WHO’s response to the SARS outbreak in 2003 and is currently professor of infectious disease epidemiology at the London School of Hygiene and Tropical Medicine. Once SARS stopped infecting people, funding for research dried up.

“The vaccine research that was started was not really continued to any great extent. Neither was the research on diagnostic tools or on really understanding the origins of the virus,” he says.

But the impact SARS had on East Asian economies did drive some lasting changes in research funding.

“They wanted to say that if SARS occurs again, we have invested,” she recalls. “That’s why there is more capacity in Hong Kong and that’s why it’s world leading in some of its research.”

SARS also encouraged spending in China, not least in the expansion of the Chinese Center for Disease Control and Prevention. This infrastructure enabled Chinese researchers to rapidly sequence the genome of the Covid-19 virus and publish it on 9 January, within weeks of the outbreak first being identified in Wuhan.

Generally, investment in pandemic preparedness ahead of time has been less than enthusiastic.

“Immediately after any outbreak or scare there is money available, but it reduces as alternative priorities take over,” says David Nabarro, co-director of the Institute of Global Health Innovation at Imperial College London and a special envoy to the WHO for Covid-19.

Nabarro points to the work that the WHO has done in identifying viruses and pathogens in animals that might cause major outbreaks in humans but says decisions on research funding ultimately lie at the national level.

“Many of us were working super hard to alert national leaders of the reality that there was a constant threat about a zoonotic pathogen causing a damaging pandemic,” he says. “It’s governments who have to make the decision.”

Barnsley highlights the WHO’s adoption of ‘Disease X’, the idea of an as-yet unknown pathogen, as a priority disease in 2018 as an important step forward. “There’s been a very significant spending on Disease X R&D over the last couple of years,” he says.

Some of that research spending will have been important in the response to Covid-19.

Barnsley’s data shows that spending on Disease X rose from less than three per cent of the total spend on emerging infectious disease research in 2016 to nearly 20 per cent in 2018, at $175m.

Another initiative that has come to play a central role in the race to develop vaccines for Covid-19 is the Coalition for Epidemic Preparedness Innovations. Set up in the wake of the West African Ebola epidemic that started in 2014, Cepi is a global coalition for developing vaccines against emerging infectious diseases. It had raised $750m before the Covid-19 pandemic.

Cepi is widely praised as the kind of global mechanism needed to mobilise funding and shave months off the time it will take to develop Covid-19 vaccines. But vaccines are only one of the ingredients required for a thorough R&D response during a pandemic.

“Cepi is great but it’s nowhere near enough,” says Head. “I think we need a few more Cepis to look at diagnostics and therapeutics that can be rapidly repurposed.”

While there was no such bottleneck over testing during the Ebola epidemic, that was less to do with pandemic preparedness than with United States defence spending on Ebola’s potential use as a bioweapon.

“It was fortuitous,” says Heymann, “because the research had already been done for bioterrorism purposes, so those kits were already available.”

Even vaccine work during Ebola was given a boost by US defence concerns. “The vaccines for Ebola were many, many years in development as a direct result of Project Bioshield,” notes Hiscox, referring to legislation by the George Bush administration, following the 9/11 attacks for stockpiling vaccines in the event of a bioweapon attack.

When it comes to delivering tests, treatments and vaccines at scale, industry becomes the key player. But Nabarro says it is unrealistic to expect business to fill in the funding gaps between epidemics. “Anybody who says this can all be solved with private money fails to understand we’re talking here about risks to public health,” he says.

Despite the economic impact the current crisis is having across all sectors of society, outside of an epidemic there is little incentive for businesses to invest against future pandemics. So any mechanisms to move away from reactively throwing money at infectious diseases during outbreaks towards a more consistent funding model will have to be led by governments and non-profits.

Dennis Carroll is a senior fellow at the The Bush School of Government and Public Service at Texas A&M University. Having led a ten-year programme for discovering viruses in wild animal populations at the US Agency for International Development, he is currently fundraising to launch an ambitious global project for monitoring 75 per cent of such viruses. According to Carroll, the Global Virome Project would maintain a consistent level of vigilance for emerging pandemic threats, as well as providing valuable tools for rapidly developing diagnostics, treatments and vaccines.

Carroll says governments need to rethink how they spend on R&D for emerging infectious diseases by investing in long-term projects like his. “We need to invest against the risk of infectious disease not just when the infectious disease is running rampant,” he says. “It’s as if we build a fire brigade only when there is a fire, and then we disband it.”

Hiscox agrees, suggesting that in future, public money could be ring-fenced by law for long-term research on infectious diseases, even through a public health levy. “What you have to do is maintain capability when things are no longer trendy,” he suggests. “In the States for example, a lot of the funding on diseases of farm animals is achieved through a levy to the industry.”

The sheer scale of the Covid-19 crisis makes it likely that countries will beef up their spending on pandemic preparedness in the short-term. But Heymann is sceptical of how long that effect might last. “The minds of political leaders are not on public health as much as on the economy,” he says, “and there will be austerity in all countries.”

But governments could be persuaded of the logic in investing against pandemics.

Covid-19 is demonstrating the risk from any single disease is “much larger than we were capable of imagining”, Barnsley says.

“We should have been spending more on the basis of the outlying scenario,” he argues. “That’s a tough sell politically, but pretty clearly we got the calculation wrong. The economic costs of the ongoing outbreak are so high that any investment will pay for itself hundreds of times over.”

Those investments that once seemed too expensive may now be beginning to look extremely attractive.