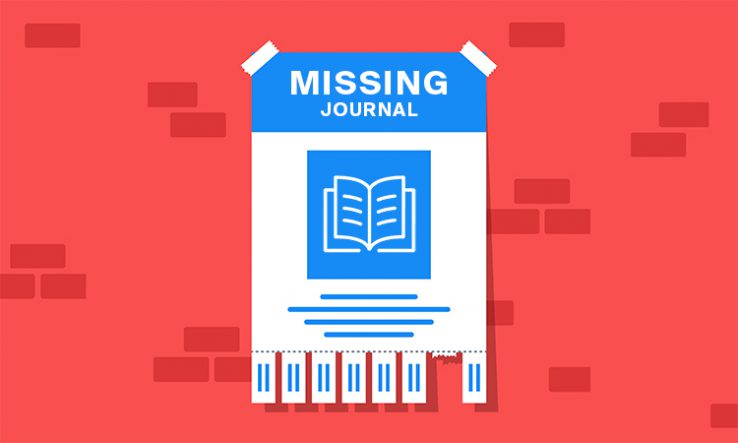 More than a hundred open-access journals from around the world have “vanished” from the internet and many more may be disappearing unnoticed—taking with them details of the scholarship of a now unknowable number of researchers.

Long-term availability of published research and data is an increasingly important aspect of scholarly publishing, and a major factor in debates about standards in open access such as the Plan S initiative.

Now a study has traced 174 open access journals that have vanished from the internet, highlighting what the team behind the work says is an under-appreciated publishing problem.

“Our results raise vital concern for the integrity of the scholarly record and highlight the urgency to take collaborative action to ensure continued access and prevent the loss of more scholarly knowledge,” warned the authors of the study, Mikael Laakso of the Hanken School of Economics in Finland, Lisa Matthias of the Free University of Berlin and Najko Jahn of Göttingen State and University Library.

In a 21 February paper published in the Journal of the Association for Information Science and Technology the authors detailed how they traced missing journals that appear in bibliographic indexes, such as Scopus, but have vanished from the internet.

Defining vanished open-access journals as those where 50 per cent or more of their volumes are no longer openly available, they found 174 publications disappeared between 2000 and 2019.

“This phenomenon is not just limited to one specific region but rather that it is occurring on a global scale,” Laakso and colleagues wrote.

But some regions appeared to have a bigger problem than others.

North America has a relatively small open-access sector, with only 7 per cent of active publications being open. But around 33 per cent of the vanished journals were from this region—some 57 publications.

Europe and Central Asia—where open-access journals make up over 50 per cent of all active journals—hosted 52 missing journals.

Laakso’s team found that certain types of journals were more susceptible to disappearance, such as those affiliated with academic institutions or scholarly societies, and those that published social sciences and humanities research.

They caution that diffusion of responsibility for preserving work could lead to more losses of data: “If there is no general agreement whose responsibility it is to preserve electronic resources, no one will be responsible, and we risk losing large parts of the scholarly record due to inaction.”

The message of their paper, they say, is that “open is not forever”.