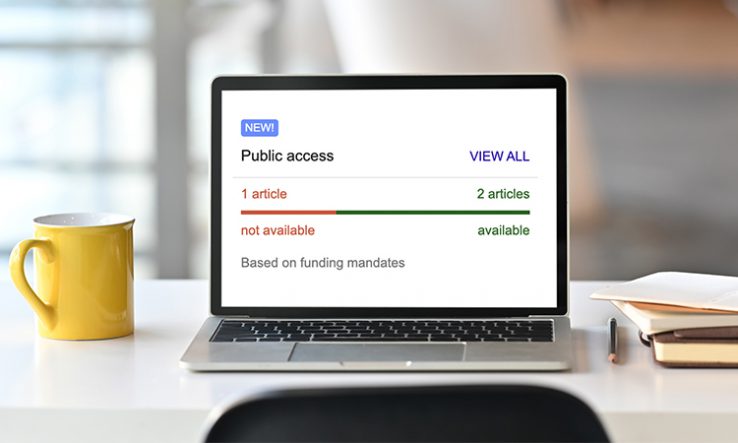 To the delight of proponents of open access, Google’s search engine for scholarly literature has begun to include information on open-access publishing in its author profiles.

On 23 March, users of Google Scholar started noticing that a Public Access section had appeared in their author profiles, showing how many papers that should be free to read due to funder requirements actually are.

A coloured bar will now appear under researchers’ public profiles, with green indicating articles that should be free to read and are, and red showing apparent breaches of the rules.

“Many funding agencies have added public access mandates to promote broad access to funded research. This helps researchers everywhere build on what their colleagues have discovered,” wrote Google’s Akash Sethi and colleagues in a blogpost.

The search engine will also link to open versions of authors’ articles. Scholars will be able to update the list of mandated articles on their profile and make corrections.

The move received a warm welcome from the executive director of Coalition S, the group of funders behind the pan-European Plan S open-access initiative.

Although there are “many wrinkles to be ironed out” if academic publishing is to become fully open access, this move “will undoubtedly help promote funder open-access policies, given the high use of Google Scholar by the research community”, he said.

Ross Mounce, director of open-access programmes at the charity Arcadia Fund, said the tool did not provide open access per se—which is generally understood to include ensuring unrestricted reuse of content as well as the ability to read it freely. But it does increase public access to knowledge, he said, and might further the open-access cause by “further devaluing” paywalled journal subscriptions.

“Why should libraries pay over the odds for a journal if the content is available by inter-library loan, [by emailing] the author, ResearchGate, institutional repositories, subject repositories, preprint servers and now Google Scholar uploaded copies too?” he said.

These means of alternative access could make it easier for libraries to unsubscribe from paid journals, he said.

The impact of the move may be lower in disciplines where Google Scholar has traditionally been less used, such as social sciences and humanities. And some countries—notably China—block the service entirely.

Mounce said the ultimate impact of the change would depend on how users engage with it. “It remains to be seen how many people will be prompted to actually upload a copy of their research to make it publicly available,” he said.