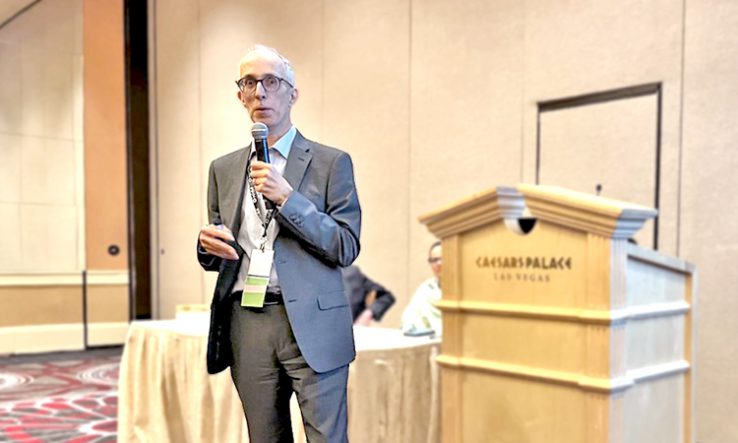 Volunteer leadership roles provide benefits for both research managers’ careers and their institutions, a specialist from the United Kingdom has told the Society of Research Administrators International annual meeting in Las Vegas, United States.

Ian Carter, an independent consultant in R&D management, said his seven-year stint as chair of the Association of Research Managers and Administrators (Arma) in the UK provided him with exposure to a whole range of people, institutions, regulators and funders he would not normally have had access to.

“The creation of networks based on people that one has the chance of interacting with is really substantive and it has paid dividends, both for my career but also in my day job in being able to facilitate relationships and fix problems,” Carter (pictured) said during an SRAI session on volunteer leadership on 2 November.

These activities also gave him some influence in the R&D sector, he added.

“Some of the things I’ve been able to be involved in have allowed me to influence the way that the UK approaches various topics, and I’ve been very privileged to be able to stick my fingers into all sorts of different subject areas—from research assessment and open access, to full economic costing and everything in between.”

For instance, he said that while he was chair of Arma, it began to be approached for advice by funders and policymakers, which he described as a “major turning point”.

“As a consequence, we then got asked to respond to consultations but also to contribute to working groups on a whole range of topics.”

This experience contributed to his personal development, Carter added, by boosting his confidence and helping him to develop expertise, knowledge and skills. However, it also had a positive impact on the institutions where he was working, he argued.

As a result, Carter said he was better informed than his institution on certain policy issues.

Despite the benefits to institutions, Carter admitted that his volunteer leadership activities were not always appreciated.

“I have had one bad boss who really didn’t like me being out… which is a real shame,” he recalled.

Annedorte Vad, president of the Danish Association of Research Managers and Administrators, said at the event that her bosses had different views of her leadership role at the organisation, as well as her activities at SRAI.

“I had three different bosses: one encouraged me, one supported me and one was very much against it,” she said. “The last one was the least fun to work for but it also made me think about what it is I gain and how it makes me a better leader at home.”

Also speaking at the session, SRAI president Debra Schaller-Demers said she was able to advance in her career thanks to her volunteer activity at the organisation.

Reflecting on her 20-year career as an administrator, she said: “I didn’t have a background in research, in medicine, in science, in anything related. But by coming and getting involved, I gained expertise.”

When she first joined SRAI, she was “vocal and asked questions”, she said, which caught the attention of SRAI bosses at the time.

“I started to realise I was gaining influence when they started to tap me on the shoulder and say: ‘You should present on this.’”

Schaller-Demers was then asked to speak at conferences, submit articles and posters at events and consult on matters outside of her immediate realm of responsibility, before becoming SRAI president in 2020.

It was this leadership experience, she argued, which enabled her to progress to her current role as vice-president of research outreach and compliance at the Memorial Sloan Kettering Cancer Center.