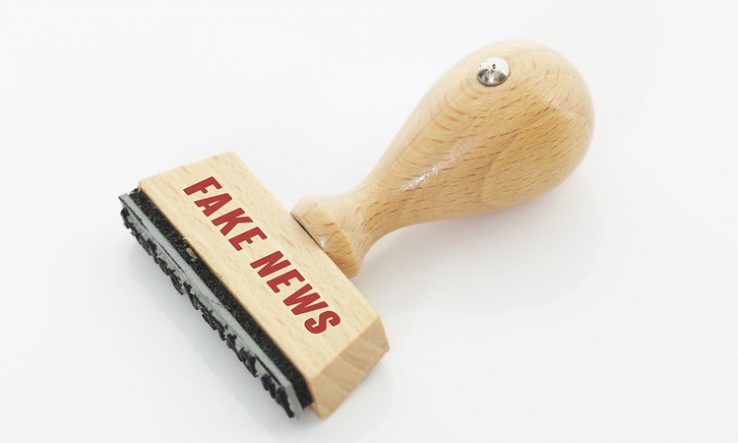 Opened on 31 March, UK Research and Innovation’s multidisciplinary call for research and innovation ideas to address the coronavirus pandemic has already announced its first batch of winners.

Among them is a project led by Elena Musi, a lecturer in communication and media at the University of Liverpool. Musi is leading in collaboration with the University of Dundee’s Centre for Argument Technology. Their project, Being Alone Together: Developing Fake News Immunity, received roughly £200,000.

The team aims to develop a ‘semi-fake news digital chatbot’ to help people decide whether a news article is stretching the truth too far (semi-fake news is news that starts from established facts but builds conclusions or an angle from them that is fallacious).

UKRI’s open call for Covid-19 research remains open to applications projects of between 12 to 18 months, with no deadline in place at present.

Where does your project fit in with the wider response to fake news?

So far, the majority of news sites, such as PolitiFact, counter false narratives that have already gone viral. We’re leveraging AI to try to make people aware before that happens, to teach citizens something before that happens. The techniques now employed for machine fact checkers are not accurate enough to replace humans. But it’s definitely possible to check for disinformation, and we aim to build a bot that can help people determine whether an article is fake or misleading.

Can you give me an idea of the timeline, from proposal to start of the project?

The decision was supposed to come 10 days after submission, although in reality it was more like 20 days later. Our 12-month project started on 19 May and will end next year. We don’t have to prove deliverables in the meantime, but we’re collecting data, so we have internal deadlines.

Did you consider any other funders for this bid?

Definitely, if you’re a medical researcher right now, there’s an explosion of funding opportunities. But in computational social science there are fewer calls and they’re quite tailored, so it wasn’t difficult to navigate through those. I applied only to the UKRI call for this project. I became aware of it thanks to the newsletter featuring open calls from the research office.

Do you have any non-academic partners on the bid?

Due to the fast nature of the bid, we did not have time to officially sort out time or resources commitments from external partners but we plan to connect with the members’ extended existing networks.

What did the application process entail?

It’s fairly standard. There’s the scientific summary, a summary for the lay public, sections that are targeted toward deliverables, expertise and resources. Basically, you need to show that the project is innovative and original. You also have to justify it by addressing a knowledge gap and explain the methodologies you’ll use and why those are useful. More than many other calls, you have to demonstrate impact. Calls right now are really impact-oriented.

How did you achieve that?

In our case, it was kind of easy because we proposed to build an open access platform and a digital bot that is available to everyone. You can measure how many people use it. We’re also potentially considering meetings and a workshop for journalists.

Was anything else different from a standard UKRI application?

The way you have to structure expenses was a bit different from general UKRI calls. You had to divide expenses by calendar year instead of academic year, but the finance team helped me with that. For me the challenge was more in budgeting for potential conferences, because at this point we don’t know what’s going to take place or not as result of the pandemic.

How did you deal with that uncertainty?

I acknowledged that in the call. I said we would like to present at these conferences if we can, so I’m going to budget for them, including travel. My approach is, it’s best to explain your rationale.

In case of cancellations, will you be able to re-purpose that money?

For potential travel, if conferences don’t happen, then we’re planning to reroute the money to research support and collaborating with students. Basically, we have to keep the UKRI up to date on any changes.

If the project takes 12 months, is there a chance it could be redundant by the time it is completed?

The deliverables of the project are meant to counter the spread of misinformation, which is highly relevant during crisis scenarios like the Covid-19 pandemic but go well beyond that.

Given this was a rolling call, how did you decide when to submit your proposal?

I had support from the research office and finance office at my university, and internal reviews from colleagues, so that helped me determine the proposal was ready for submission. The draft didn’t take too long since I was already working on the topic and had some ideas as to which partners I wanted to be involved and how to structure the project. In terms of page length, I didn’t have to write a huge case for support. Since I knew what methodology I was going to use, the writing went quickly. The whole process took a few weeks, and the review process was fast too—the feedback I got was positive, so I didn’t have to edit the proposal too much.

Was this your first UKRI grant application?

It was the second. I’d put in a networking application before this, but the outcome has been delayed by Covid-19.

Did it help knowing the organisation?

It did. Before, I was working in the US, and before that in Switzerland, so I’ve been dealing with different funding agencies and there are different styles of application, which changes how you frame the narrative and which aspects to focus on most. When it comes to the Swiss National Science Foundation, generally proposals tend to be written in more of an academic style. You also have to really ground your study on previous work. Whereas in the UK and in the US, you have to make your outline very clear to a lay audience. That’s often difficult to do as an academic.

What would you advise others considering applying to UKRI’s coronavirus scheme?

Stay focused on impact and originality: look for pathways of impact that are clear and rapid and think about why the response to Covid-19 is unique compared with previous research. Another aspect is feasibility – you have to show that what you’re promising is deliverable in that timeline, and from the skills and expertise of team. Members of our team had experience in developing similar tools and in working with time pressure, so that helped. If it’s clear you already have experience in developing something not so different, you’ll be able to carry out the research you promise.

2019-present Lecturer in communication and media, University of Liverpool

2016 PhD in argumentation and linguistics, University of Lugano, Switzerland