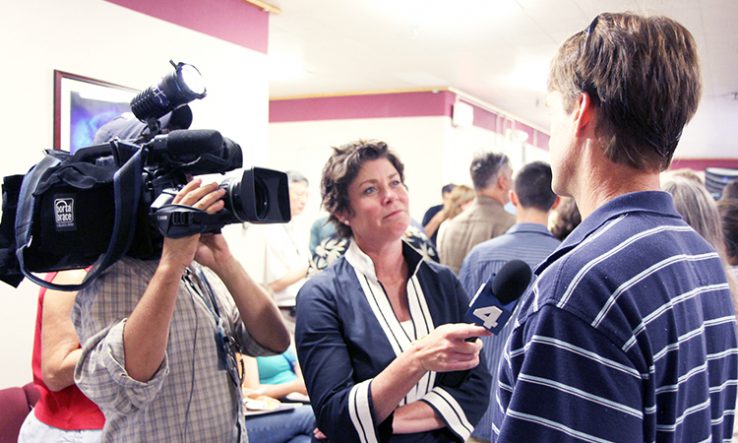 For a long time, oceanographer Erik van Sebille has wanted to be on screen. “When I started my undergraduate I wanted to become a television weatherman,” he says, “and in some ways that’s what I’ve now become: somebody who talks about the ocean and explains what the ocean is like, how it works, why it is important for us.”

Van Sebille is an associate professor at Utrecht University, Netherlands, and one of the inaugural winners of the European Research Council’s Public Engagement with Research Awards, which took place for the first time in 2020. Since 2016, he has held an ERC Starting Grant for a project tracking plastic in the oceans, and he already has hundreds of media interviews under his belt across a swathe of international news outlets.

He says the very existence of the awards show that public engagement is increasingly valued at prestigious funders like the ERC. “They are starting to find it more important, which is good,” he says, noting that while there are well-established channels for ERC grantees to tap into policy advice, “in terms of more public outreach, it’s newer”.

While the public engagement award did not come with a cash prize—which, given the value of an ERC Starting Grant, van Sebille is not at all fussed about— having a media showreel can undoubtedly add sparkle to funding proposals. “I always mention it,” he says, “I always say in the outreach component, in the public engagement component, that I’ve done more than 250 interviews.”

And van Sebille is certain that having media experience has helped accelerate his career. “I applied for a position at Imperial College London and during the interview the thing that they asked most about was all this media work and how it was to talk to journalists,” he says.

Getting his big break in media was a combination of developing his media skills and being in the right place at the right time. As a postdoctoral researcher at the University of New South Wales in Sydney, Australia, he was accepted on a media fellowship scheme at the Australian Climate Commission. When a journalist from the Sydney Morning Herald newspaper visited his lab, van Sebille showed him an experiment he was running using drifting buoys to track currents in the Southern Ocean.

“He said: ‘Yeah, that’s interesting, but my readers wouldn’t care,’” van Sebille recalls. “Then two weeks later or so, I still remember really well, I was sitting at the bus stop and suddenly he called again, this journalist.” A story had just broken about the Malaysia Airlines Flight MH370 which had disappeared over the Southern Ocean.

“I said call me back in 15 minutes, I’ll read the story,” van Sebille says, and 15 minutes later he was explaining the complexities of ocean currents and how debris from a plane crash might disperse over time. “I was the first oceanographer to say anything about the story.”

Over the next month, van Sebille did more than 130 interviews, including becoming a regular guest on CNN. “That month really changed my life,” he says, suggesting that the initial willingness to engage with the Sydney Morning Herald journalist had been the catalyst for everything that followed.

Given his relatively junior position at the time of the MH370 story, having the support from higher up in his institution gave him the confidence to keep going. “Both my professors, the dean and even the vice-chancellor sent me emails saying ‘great, keep on going, this is fantastic, it’s really good for the university’,” he recalls.

One of the first steps for early career researchers interested in media work should be to flag their interest to their supervisors, he advises, “especially if you have a supervisor who is in the media themselves a lot, then there are always going to be stories that they don’t have time for, that they are not interested in”.

This approach worked out sweetly for van Sebille, whose first media opportunity was going to the Pacific island of Tuvalu to film a documentary on sea-level rise, which had been offered to his professor. “Going to a tropical island for a week just didn’t fit into his agenda,” van Sebille explains, “so when that request came in he pushed it forward to me and I was of course very happy to do that.”

Filming the documentary was a valuable learning experience, giving him time to speak to the crew and learn how media works. “Everybody wants soundbites, wants something that’s snappy and understandable, especially the broadcast media,” he says. “I think as scientists we can do that while still staying true to our science,” he adds, advising how important it is not to simply lecture and assume people will be interested. “First you have to make them interested, and that you do through soundbites, through interesting stories,” he suggests.

One way of doing this is by going into schools and talking to young people, van Sebille says. “That’s how I learned to make my scientific story comprehensible.” Another way to get your name out there is to be visible on social media, he suggests. “Create content so that people know what you have to say.”

While media work might not be up everyone’s street, and not every research area will lend itself to the limelight, it can open doors through exposure beyond the research community. “For me, it’s not enough just to sit in my lab and to do my experiments,” says van Sebille, “I also want to make sure that my science, and other people’s science, has an impact.”