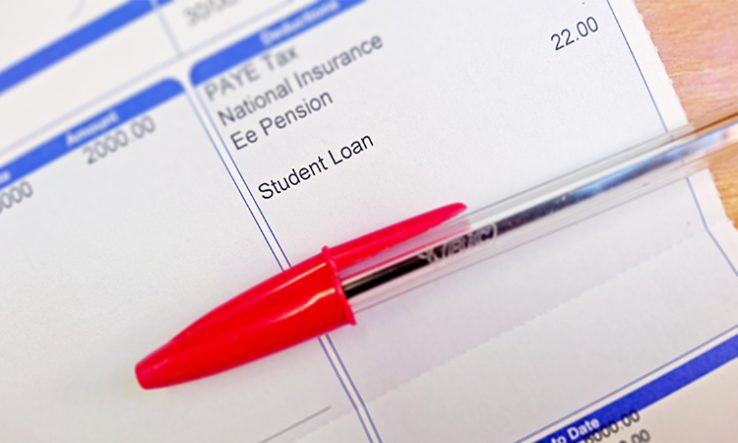 According to the Student Loans Company, more than 513,000 people in England overpaid their student loans between 2009-10 and 2017-18, each paying on average £597 more than they should have—meaning that about £300m in overpayments was collected in just under a decade. The overpayments occurred because the loan system has historically continued to take pay-as-you-earn payments from former students even after their balance has been paid off.

While most of this overpayment has been reclaimed by graduates, some £28,460,095 has yet to be collected, a freedom of information request made by Research Professional News has revealed. Almost £900,000 of this is owed to students who overpaid a decade ago during the 2009-10 tax year, with a total of almost £6m owed to those who finished repaying between 2010-11 and 2012-13. 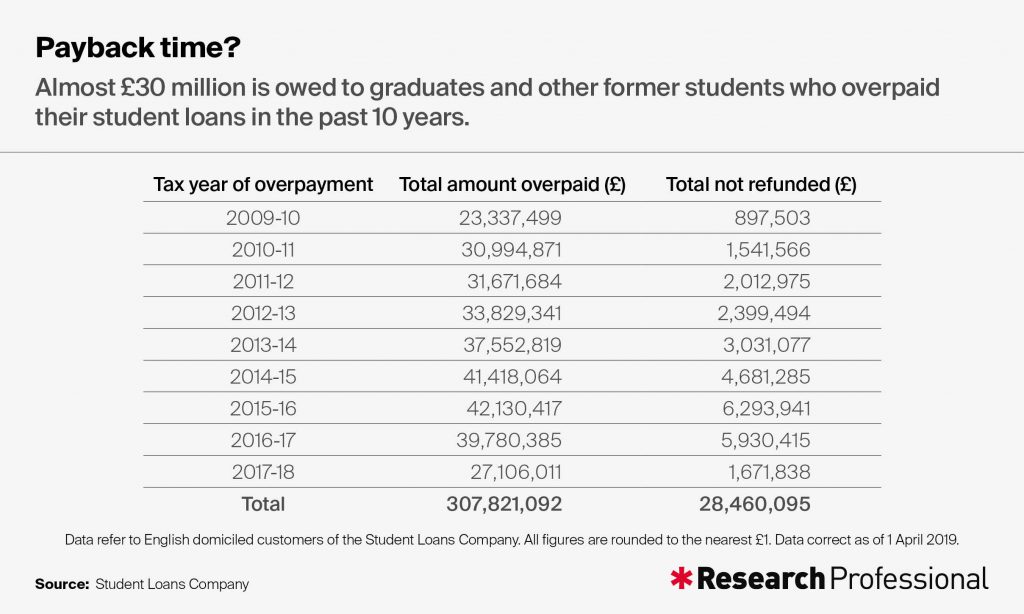 Eva Crossan Jory, vice-president for welfare at the National Union of Students, said that the Student Loans Company must “ensure it places as much emphasis on locating graduates who have over-repaid as it would tracking down those it believes owe it money”.

“In many cases, the SLC will no longer have accurate contact information to alert people they are owed money, so we would encourage all those who have repaid their loans to consider getting in touch with SLC to see if they are eligible for a refund and ensure their details on record are correct,” she said. “Ultimately, the SLC must reduce the incidence of overpayments by updating its systems and how it works with HM Revenue and Customs.”

The overpayments are a result of the way HMRC and the SLC share information. Historically, employers would take student loan repayments from employees’ salaries, and that information would then be sent by HMRC to the SLC at the end of the tax year. The SLC would apply this payment information to the graduate’s account, calculate the balance and send out a statement. This also informed the point at which employers would stop collecting payments.

Because the SLC and HMRC only communicated once a year, thousands of people continued being charged for months after they had settled their bill, although students within 23 months of paying off their loan were given the option of paying by direct debit—as long as their contact details were up to date. In the 2017 autumn budget, ministers announced plans to reform the system. On 30 April this year, the government announced that “HMRC will send SLC student loan repayment information as reported by employers on a weekly basis”.

A spokesman for the SLC told Research Professional News that it wanted “all customers to repay the right amount and not to over-repay on their loan”.

“This is why we write to every customer in the last two years of their repayment, inviting them to repay by direct debit as this will stop their employer deducting from earnings and help to prevent over-repayment,” he said.

Rachel Hewitt, director of policy and advocacy at the Higher Education Policy Institute, said the data showed it was “clear that there needs to be more transparency about what happens when students have fully repaid their loans and the amount owed”.

“We shouldn’t be in a position where some graduates are overpaying on their loans and may not even be aware,” she said.

“While the SLC is generally reliable in giving out the money to students, perhaps not enough focus is being placed on the other end of the process. We need to consider whether the SLC has the resources it requires to operate the entirety of the system, to avoid these errors being made.”

A government spokeswoman told Research Professional News that the changes made in April, which allow weekly data sharing between HMRC and the SLC, would “help to prevent graduates repaying too much”.

“If a borrower believes there has been an over-repayment, they should contact the SLC to seek a refund,” she said. “We continually work to improve the repayment system, enabling those taking out a student loan to have better online access and more up-to-date information about their repayments.”

Until reclaimed, the money is officially the property of Her Majesty’s Treasury. Any income accrued on overpayments is also repaid to graduates when they reclaim their money.