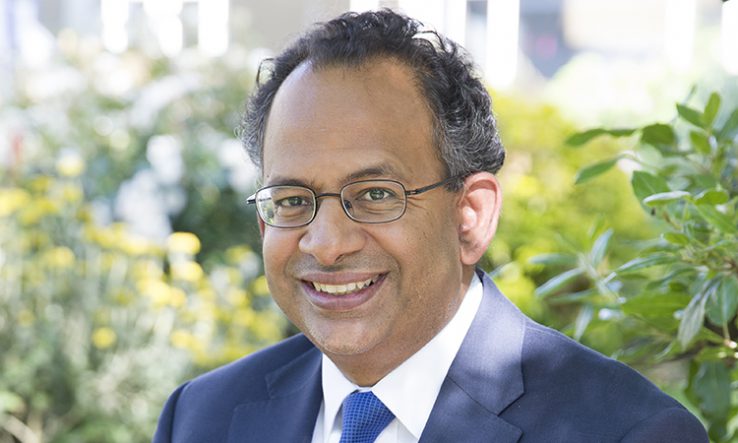 Rama Thirunamachandran took up his role as chair of modern universities mission group MillionPlus in early December, just before the country returned Boris Johnson’s Conservative government with a sizeable majority in the 2019 general election.

Given that Thirunamachandran replaced former University of Bedfordshire vice-chancellor Bill Rammell after he had served six months as chair, both the mission group and the government are looking forward to a period of stability. But when Research Professional News meets Thirunamachandran in his vice-chancellor’s office at Canterbury Christ Church University, he is clear that stability does not mean complacency.

“The role of MillionPlus is trying to ensure that policymakers have a good understanding of what modern universities are all about,” he says, quietly but forcefully.  “And that understanding is patchy, because many in Whitehall have been educated at pre-92 institutions.”

Thirunamachandran himself studied at the University of Cambridge, later taking roles at several Russell Group universities including the University of Bristol and King’s College London before becoming vice-chancellor of Canterbury Christ Church University in 2013. His own career path means that he “passionately believe[s] in the mission” of modern universities, which make a “huge contribution” to their local areas by training students and working with businesses to boost the local economy.

Modern universities are also hubs for vocational training for professions such as nursing. Before the Conservatives were re-elected in December, in their manifesto they promised to deliver an extra 50,000 nurses.

But universities’ funding has remained static for two years, as tuition fees have remained capped at £9,250 while other costs have grown. Like all institutions, modern universities are trying to “manage an income that is either flat or declining”, says Thirunamachandran.

If funding is not increased, the government could “imperil its own agenda” to boost the number of nurses and other public sector professionals. When pushed on what that could mean for institutions, Thirunamachandran warns that a prolonged funding squeeze could mean the end of the road for some universities.

“I do think some institutions potentially in the future could be at risk if there isn’t a sustainable funding settlement for the higher education sector,” he says, adding that universities’ costs are “going up relentlessly” while facing strong competition for students. Day-to-day expenses such as lab equipment and journal subscriptions are slowly growing, while pension costs have spiked for both Universities Superannuation Scheme and Teachers Pension Scheme employers in the last year.

Canterbury Christ Church University is no exception. Thirunamachandran admits that the university’s operating surpluses have “undoubtably come down” from around £7 million in 2013, the year he became vice-chancellor, to just £922,000  in the 2018-19 financial year. Staff costs are partly behind the slimmed down margin, which he says affects all universities. Although Canterbury Christ Church University has not held a redundancy scheme or a recruitment freeze, it has “very tight, centralised control” over any new appointments. Thirunamachandran himself has not taken a pay rise in the past two years to send the signal to staff that “pay restraint is very important”.

Despite the squeeze on income, Thirunamachandran is confident that the university’s future is bright. A £60-million facility for the school of engineering, technology and design opens in September and the Kent and Medway medical school, run with neighbouring institution the University of Kent, will open in July.

And it’s universities in the middle of the league tables that worry him the most. While Russell Group universities can rely on their reputations as research-intensive universities to attract students and modern universities can style themselves as experts on vocational training, including degree apprenticeships, universities outside of these categories arguably have a foot in either camp as the divide between them grows.

“In many ways, the greatest threat is probably for those institutions in the middle, who are probably struggling to differentiate themselves more in this competitive marketplace,” says Thirunamachandran.

One way for the government to ease the squeeze would be to dodge pressure to reduce tuition fees to £7,500, as recommended in Philip Augar’s review into post-18 education. Although Augar published his review in May last year, the government has not yet responded and is unlikely to do so before the autumn budget later this year.

Thirunamachandran says that universities are already under enough pressure, and “cutting the fee or freezing the fee isn’t the answer”. Without an accompanying funding boost for universities from elsewhere, he warns that other proposals in the Augar review—such as reversing the drop in part-time and mature students, increasing provision at Level 4 and 5 and rolling out more apprenticeships—would be unachievable with a fee cut.

This is where mission groups such as MillionPlus come in. Bodies like the Russell Group, GuildHE and MillionPlus all fight for their own members’ interests but when they work together “without trashing any other part of the sector”, Thirunamachandran says they are effective in acting as a voice for all universities.

“I think the critical thing is the mission groups recognising that ultimately, collectively they are protecting the diversity of the sector, and the diversity is one of our greatest strengths,” he says.

While Thirunamachandran is talking about different types of higher education provision, universities have in recent years come under increased scrutiny regarding a different kind of diversity. Data from the Higher Education Statistics Agency published in January revealed that there were no senior black academic staff recorded in 2018-19, compared to just five the previous year. The Office for Students is putting pressure on universities to close a 13 percentage point gap between the proportion of 2.1 and first-class degrees awarded to white students and black, Asian and minority ethnic students. That gap rises to a 23 percentage point gap between white and black students.

Thirunamachandran is one of a handful of BAME vice-chancellors at UK universities, and he says he was “astonished” to learn that he was only the second-ever BAME vice-chancellor when he joined Canterbury Christ Church University in 2013. But the university still has one of the highest attainment gaps at any English institution, at 33 percentage points between white and BAME students and 42 percentage points between white and black students specifically.

He says his university has appointed a BAME champion, “given the complexity and importance of the issue, we are addressing the attainment gap at a number of levels involving students and staff from across the University. We have a range of initiatives under our Retention and Success framework to address directly the needs of BAME students by helping to build a sense of belonging within our community, as well as focusing on enhancing learning and teaching, transition, orientation and induction, staff development, and curriculum design.”

On the attainment gap in general, Thirunamachandran says it is “a multi-faceted issue” borne of “complex” problems such as a lack of role models among staff, little diversity in course reading lists and Euro-centric curricula. “I think most people absolutely agree that the attainment gap is something which shouldn’t exist,” says, adding that universities “need to work constructively” to attack the root causes.

But Thirunamachandran rejects the idea that universities are blighted by an in-built racism. “All universities have got a professional and moral responsibility to improve diversity. But it is going to take time and it is not well served by people going around accusing people of being racist,” he says.

“You always get a small minority who say there’s inbuilt racism in the system and so on, but I’m not sure I buy that,” he explains, adding that “universities are some of the more liberal types of organisations we have in the country and we should cherish that”, especially as institutions look outside the UK for students and staff.

And Thirunamachandran understands the importance of attracting the best talent to modern universities. As a director for research at the Higher Education Funding Council for England, he was responsible for oversight of the development of the Research Excellence Framework. With the 2014 exercise a distant memory, attention is turning to the REF2021, which has a submission deadline of 27 November. What does he think of the way the REF has developed?

Thirunamachandran pauses. “Many of us in MillionPlus operate in regions where we are the main provider of research, knowledge, exchange, opportunities for placements, in our sub-region,” he says. “And if research isn’t supported at our member universities, it’s not just the universities and students who suffer, it’s also that sub-region as a whole that would suffer.”

A balance must be struck between funding blue skies research and assessing excellence, he says, adding that MillionPlus “would continue to make a strong case for ensuring that all parts of the sector and the full range of research is funded, recognised, [and] assessed properly through the REF process”.

“It’s really important to be able to switch off, because if you don’t then you can’t be fresh,” he says. Thirunamachandran spends his “limited holiday” walking on the nearby coast, travelling far from work with family and following cricket—although these days it is a spectator sport. “My playing days are gone, sadly,” he explains.

By the end of his two-year term as chair of MillionPlus, Thirunamachandran may cherish that ability to switch off even more.