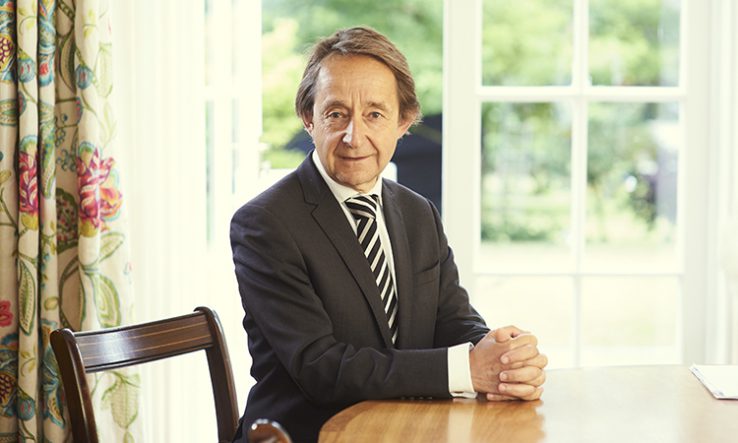 After five years as vice-chancellor of the University of Buckingham, Anthony Seldon is in need of a break. “I do feel completely exhausted,” he admits. “The university needs a new leader and I need a new challenge.”

The former private school head is looking forward to taking a few months off when he officially steps down in October. Although he says he was always planning to leave after five years at the helm, a series of personal challenges, including the loss of his wife in 2016, mean Seldon will finally pause and “take stock”. But he is not planning to pause for long.

“I’m still going to be around,” he says. “Money is not important to me, but I want to do something which I feel is good, where I can make a contribution in whatever way, probably in education.”

Seldon is leaving at a difficult time for the private institution. The Brexit uncertainty hanging over universities for almost four years has suddenly given way to very real concerns about financial stability amid the coronavirus pandemic. With international students expected to stay at home next year, many domestic students considering deferrals and income from conferencing, accommodation and catering severely hit, some have claimed universities could collectively stand to lose billions of pounds next year.

As a result, some universities are predicted to fall into the red next year or be pushed further into deficit. Several institutions, including the University of Edinburgh, have warned of a possible loss of income of up to £150million in 2020-21, while a government support package was met with disappointment.

The University of Buckingham is not immune. Seldon admits it is already seeing a “small deficit”, although he stresses the university is in “quite a good position” and its order book looks strong. According to the university’s accounts for 2017-18, Buckingham made a surplus of £535,000 in 2018, down from £7.6 million the year before.

And there is something else. The Charity Commission confirmed to Research Professional News that concerns have been raised to the commission “relating to governance and financial issues at the University of Buckingham”. A spokeswoman for the Charity Commission said: “We await further information from the trustees, who are co-operating with our ongoing case."

Although Seldon was unable to comment, a spokeswoman for Buckingham said: “It is not uncommon for charities to receive queries from the Commission. The university has already responded on most points and will complete our response to the final points shortly. One reason for the outstanding answers is that they relate to commercially sensitive discussions.

“In common with many other universities, we have faced some financial challenges but have already taken steps to address this. During the last three years, the university has expanded its numbers by well over 30 per cent, erected major new buildings and set up new institutes.”

Back on ground he can cover, Seldon reflects on his time at Buckingham. “I think whatever impact I could have made, I will have made by the time I go,” he says. “I’ve loved it. I’ve really, really loved it, and the people in it, the students and staff”.

But running the UK’s original private university has been “difficult” at times, and despite a 37 per cent increase in student numbers during his tenure, Seldon was “hoping they would go up much more”. “It has been a difficult time to run this kind of university, and I sometimes think how much more I would have liked to have done.”

And what would he have done? “I would have built more,” he says quickly. “I would have wanted to make it more academically distinctive.” Buckingham’s new Institute of Sports Humanities is an example of this academically distinctive, “non-status-quo” approach as it crosses traditional departmental boundaries, while the Institute for Ethical AI in Education, launched in 2018, is challenging “the lack of ethics” in digital spaces. Next year, Buckingham will launch the UK’s first degree programme using artificial intelligence to teach.

Seldon is keen to stress that Buckingham is “much more concerned” with education and research than private providers in general, and the not-for-profit university is looking to enter the Research Excellence Framework for the first time in 2021. On whether England needs more private providers to come and disrupt higher education—as provided for in the Higher Education and Research Act 2017—Seldon’s answer is a tentative “yes and no”.

“I think education is a public good, and there is obviously scope for it to be more efficient and effective, but at the end of the day I’m not certain that selling degrees is the same as selling cars or detergent,” he explains. “I think it’s an investment in human capacity, and that if we reduce everything to ‘what is this person going to earn and how much money can we get’, then we will just see the short-term prevailing at the expense of the much deeper enrichment.”

Right now, higher education is dealing with a different kind of disruption. For Seldon, the coronavirus pandemic has shown the need for “more edgy academic life” and a “challenger approach” from universities. He believes changes to the country’s higher education model has been needed for years but universities have been “slow to adapt” to shifting demands, meaning the coronavirus will be the “biggest changer that HE has seen since the era of mass education”.

“There has been a lot of pressure built up behind the dam, and Covid-19 is the charge that has finally exploded the dam,” he says.

From the historian who has written biographies of prime ministers and a history of 10 Downing Street, the government receives a rating of “somewhere between six and seven out of 10” for its handling of the pandemic. While it is “getting a lot of things right”, it was “slow to react” and has been “overly dependent on too few people”.

And ministers’ heads were turned by the UK’s biggest challenge of the pre-Covid era. “Brexit was too much of a distraction for them, and they didn’t see [Covid-19] coming.”

Seldon himself has come to terms with the UK’s departure from the EU, although he is “very sad about it”. “I don’t think Brexit is the right way forward for Britain, but I do think having lost the vote, we have to get on with it.”

In November last year, Seldon personally experienced the visceral split in feeling between universities and many members of the public on Brexit. While giving an after-dinner speech to a group of around 60 people in a London restaurant—which he insists was a “totally neutral talk”—he was attacked by a man who pulled him to the ground.

“I was slightly taken aback by it because it was so unexpected,” he says. “I can’t even remember if I continued speaking afterwards. I think I did.”

Although the incident was “pretty horrible”, his colleagues and other attendees were “absolutely fantastic”. “It made me realise…wow. I wasn’t even talking against Brexit…I was just talking about Brexit,” he says.

Overall, universities have been firmly on the side of the Remain campaign, either explicitly or through implied support. Seldon agrees this could have damaged institutions in the eyes of a significant proportion of the public. “I don’t think that helped. But in many ways I think universities should have been more vocal,” he says.

Although Seldon is not a Brexiteer by nature, he stresses that Britain “was too unequal as a country and too elitist and too London-centric”, and the public used the referendum to make their voice heard on those issues. “I think these were all problems, but Brexit wasn’t the answer to it.”

However, Seldon is dead against re-running the vote. “If we have another referendum, it will be social chaos.”

Seldon is well known for not being afraid to voice his opinions—even on his fellow vice-chancellors. In national newspapers he has attacked university leaders’ pay, although he has practised what he preached by taking a series of pay cuts, and bemoaned a lack of strong leadership among institutions.

Having done the job himself for five years, does he regret his comments? “It wasn’t that I didn’t have a respect for vice-chancellors, but I didn’t really know vice-chancellors,” he says. “And my respect for them has grown massively. I think it’s an incredible community of people. And yes, I have been critical of some things—I think I was maybe wrong about some things, I think I was right about some others.”

Seldon wanted universities to “be much more self-governing and self-improving”, more independent and less reliant on having bodies such as the Office for Students “dictate” changes. He believes university leaders were “having one thing after another piled on top of us” such as criticism over vice-chancellors’ pay, grade inflation, and worries over value for money,

“People got cross with me for saying that we needed to be more on the front foot shaping the debate rather than reacting to it,” he explains, although he thinks universities have become “much more independent minded” and are “standing tall” now.

Although the coronavirus pandemic is catastrophe for universities, Seldon believes the crucial role institutions are playing in fighting Covid-19 is showing “how fantastically important we are” to the country. And it would be “a criminal misuse of taxpayers’ money if we let vulnerable universities disappear because the Treasury will end up spending far more money…if they are not supported,” he warns.

Despite courting controversy at some points in his career, Seldon wants to end his time as a vice-chancellor on a positive note. “Many VCs have become friends, and I hope we are going to keep in touch afterwards,” he says.