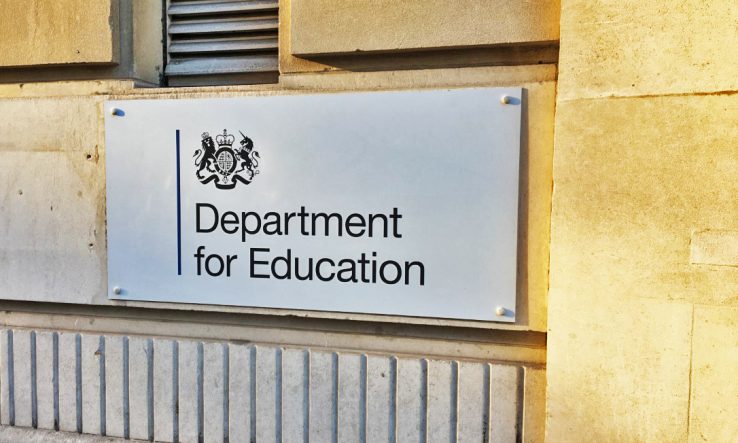 Universities hope that underwhelming bailout package is only the beginning

May the fourth be with you, as Luke Skywalker did not quite say. Universities are going to need some form of otherworldly help, because not that much is coming from the government.

After weeks of negotiations between Universities UK and the government, the Department for Education has released details of the financial package on offer to universities. Chris Parr has all the details and reaction from across higher education.

As expected, the number cap will be based on 2020-21 home and European Union student forecasts, plus an additional 5 per cent. That is quite a loose cap and for some institutions it represents the opposite of a bailout—they will feel that the pistol has been fired for open season on their students.

For universities struggling to recruit before the pandemic, the news that other institutions can now maximise recruitment of the limited number of UK school leavers will seem like the government has just poured a bucket of water into an already sinking canoe.

The government says that it has “the discretion to allocate an additional 10,000 places, with 5,000 ring-fenced for nursing, midwifery or allied health courses to support the country’s vital public services”, but the details on that are patchy. It is not clear where those extra 10,000 students are coming from in September.

The Department for Education says that “the measures aim to allow students, who want to go to university and meet their entry requirements, to access higher education while avoiding competition among providers taking a form which would go against the interests of students and the sector”. The wrong kind of competition? It seems government higher education policy is as susceptible to mutation as the coronavirus.

The £2.6bn on offer is neither a grant nor a loan. It is an advance payment of tuition fees from the next academic year. Theoretically, this will smooth immediate financial shortfalls. But it will also mean that universities have to cut their cloth further down the line.

A haircut is coming, says the department. The advance payments will “help universities better manage financial risks over the autumn, including taking steps to improve efficiencies and manage their finances in order to avoid cash flow problems further ahead.” ‘Efficiencies’ is an ominous word at the best of times; here, it is code for inevitable redundancies.

The money is an advance of returning students’ fees and does not affect the loan liability of students.

Once again, the department points universities towards the Treasury’s business loan support schemes, which the Office for Students estimates could provide £700m to universities. To put that in context, the turnover of UK universities in 2017-18 was £38.2bn.

There is also a further nudge towards the Coronavirus Job Retention Scheme, with the caveat that “any grant from the scheme should not duplicate other sources of public funding where these are being maintained, such as UK home student tuition fees”. This makes it very difficult for any university to access at a time when other income streams are fast drying up.

Today’s announcement makes clear that the government expects these advance payments to be sufficient to prevent institutional failures. “Should [it] not be sufficient, such that a higher education provider finds themselves at risk of closure, the government will only intervene further where we find there is a case to do so, and only where it believes intervention is possible and appropriate, and as a last resort.”

Should that last resort be reached, the Treasury will work with the Department for Education and the Department for Business, Energy and Industrial Strategy to “develop a restructuring regime, through which we will review providers’ circumstances and assess the need for restructuring. Where action is required, this will come with attached conditions.” A similar approach will apply among the devolved administrations.

It is very clear indeed that the government has no appetite to bail out badly run universities. Let’s hope Playbook never has to report that some institution has arrived at the last resort.

The £100m for research is perhaps the most eye-catching of the announcements, precisely because it is the opposite of eye-catching. It may sound like a big number, but it is 5 per cent of what UUK asked for when it sought a doubling of quality-related funds.

The science and research budget is scheduled to double between now and the end of this parliament. So why is the coronavirus settlement for research so meagre?

The notes related to the Department for Education release confirm that the £100m is QR brought forward, “to ensure research activities can continue during the crisis”. This does not come close to the cross-subsidy that research receives from the £7bn in tuition fee income that international students provided last year.

This QR top-up is intended “to offset short-term impacts caused by the coronavirus outbreak, including alleviating immediate cash flow issues and where other income which would normally pay for research is no longer available”. We assume it will be distributed on a pro rata basis relative to existing QR held by institutions, but there is no detail on that yet.

A research sustainability task force has been set up between the education department, the business department and the devolved administrations to monitor the health of research as the pandemic plays out. Another committee is being set up between the education department and the Department for International Trade, “to consider how the international education strategy can be updated to respond to the impact of the coronavirus outbreak”.

‘Updated’ is doing a lot of heavy lifting in that sentence. The Department for Education helpfully says that “the student number controls will only apply to domestic and EU domiciled full-time undergraduate students”.

Universities that find themselves in particularly dire straits can also sell off parts of their estate to the government: “The Department for Education will consider purchasing assets, such as land and buildings, where they can be used for new or expanding schools and colleges. This financial year, the department has budgeted for up to £100m to acquire sites for planned projects across purchases from suitable vendors, including higher education providers among others.”

A total of £46m of existing student premium funding from the Office for Students can be redirected to student hardship programmes, with a heavy hint that it should be used to help students access the internet and buy IT equipment.

The regulator is taking on more temporary powers “allowing it to intervene if universities and colleges act in ways which put at risk students’ interests or the stability or integrity of the sector”. This includes making unconditional offers and providing inducements such as free laptops.

There will be an “enhanced” clearing system in operation over the summer, which is described as “proactive and personalised”. The department says there is now “a voluntary commitment from members of Universities UK in England and Wales to follow an agreement on fair admissions practices, so providers will recruit students in an impartial, structured way”.

In the coming days, we will no doubt receive details on what that actually means. This morning, UCAS says: “Universities UK’s proposed sector agreement on fair admissions practices provides further confidence to students that they can progress with their application and benefit from a wide range of choice and online flexible support,” which does not necessarily help us understand it any better.

All in all, it might be better to describe the package as a sticking plaster than as a bailout. It is a fraction of what Universities UK requested from the government.

Putting a brave face on things this morning, UUK president Julia Buckingham said “it is clear the government has listened to the concerns raised and has drawn from the suggestions that the sector has made”. She added: “Universities will want to examine and understand more fully the details of today’s announcement and then work with government to ensure that detailed measures are developed to meet both the scale and diversity of pressures that universities are facing.”

That is a polite way of saying that this is nowhere near enough money to fix an enormous problem. Jo Grady, general secretary of the University and College Union, was less circumspect, saying that universities “need more than IOUs to solve the problems they face”. “The government must underwrite funding lost from a fall in domestic and international student numbers and remove incentives for universities to compete against each other at a time when we need to be pulling together,” she said.

As Playbook has suggested before, the government is reluctant to act on international student income until it sees the lie of the land in September. The UCU might get its wish with the extra powers taken by the Office for Students, which is threatening £500,000 fines to any institution that breaks the voluntary code on admissions practices or makes “decisions that do not demonstrate high standards of good governance and could undermine public trust and confidence in higher education”.

That’s quite a sweeping power. It shows that there is as much stick in these proposals as there is carrot.

For now, it looks as if universities are not going to receive the sort of financial help from the government that they had hoped for. Rather, the emphasis from the Department for Education is on making do and mending with existing resources. Is higher education about to experience its own version of the blitz spirit?

This text first appeared in our 8am Playbook service on 4 May 2020, to subscribe email clientservices@researchresearch.com