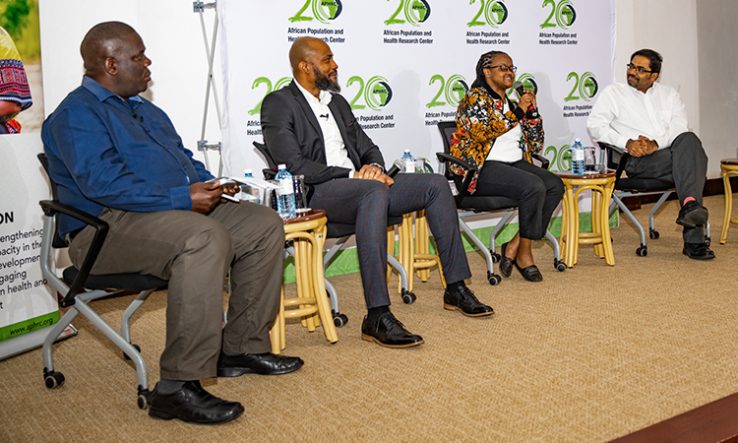 ‘Something pathological’ about not seeing it, Nairobi gathering hears

Racial discrimination is severely hampering African researchers’ contributions to the field of global health and holding the field back, a meeting on anti-blackness in public health heard this week.

The phenomenon is everywhere—from Africans being denied visas to attend conferences to the under-representation of Black people on journal editorial boards—Canada-based global health professor Madhu Pai (pictured, far right) told the meeting, organised by the African Population and Health Research Center, in Nairobi, Kenya, on 31 October.

“People from Africa, the most impacted continent for HIV/Aids, have the hardest time getting visas for an Aids conference,” Pai told hundreds of online and in-person attendees.

“I’m not a Black person, but even I can tell that it’s anti-blackness. There’s no other explanation for this that I can find,” he said. “If you aren’t seeing it, there’s something pathological about that.”

Outrage grew when Ogwell Ouma Ahmed, the acting director of the African Centres for Disease Control and Prevention, tweeted that he had been stopped by border security at Frankfurt airport in Germany from travelling onwards to the World Health Summit 2022 in Berlin, despite holding a valid visa.

The incidents that reach the public’s attention are just the tip of the iceberg, APHRC director Catherine Kyobutungi told the meeting. “Behind every high-profile visa incident we see there are tens of thousands that we don’t see. Behind every incident there is unquantifiable harm.”

Githinji Gitahi, director of Kenya-based health NGO Amref Health Africa, told the meeting that while there are good intentions to include people from the global South in health discussions, these intentions do not carry over into practice.

“This good intention has been blind to inclusivity barriers, including but not limited to cost, racism, time, income, language, visa discrimination, and so on,” he said. Work is needed on “opening the doors, the rooms, the windows of any other convening platform by ensuring that it is inclusive”.

He added that it is not straightforward for African health actors to create their own platforms to hold similar discussions.

A ‘beggars can’t be choosers’ approach is unjust in terms of global health action, said Samuel Oti (pictured, centre-left), a senior programme specialist with Canada’s International Development Research Centre. “If this was a capitalistic enterprise, maybe it’s fine. But global health and its essence is a right. If it’s a right, then the African beggar must have the same right as the American millionaire.”

Oti decried the view that African countries should improve their governance and fund more research and health themselves before telling the rest of the world (most of the funding of public health initiatives comes from outside Africa) how to spend its money.